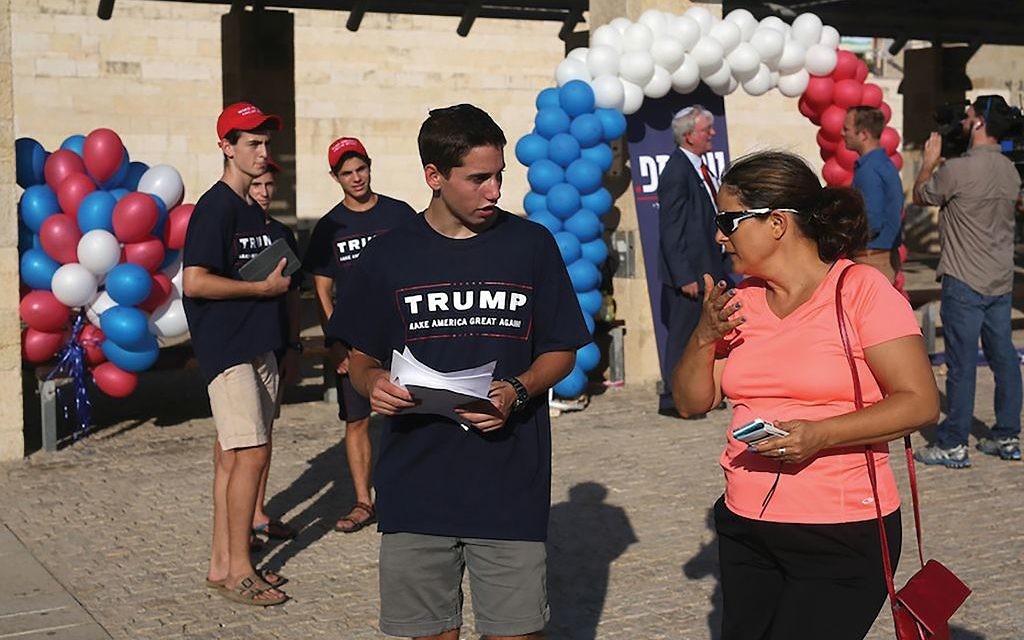 Tel Aviv — In the U.S., the nationwide field operation for Republican presidential candidate Donald Trump is said to be thin and outgunned by the organization built by his Democratic rival, Hillary Clinton.

But in Israel, Republican Party operatives boast they are rolling out one of the most substantial get-out-the vote campaigns here ever to enlist tens of thousands of American expats who live in the Jewish state in support of Trump.

The Israel chapter of Republicans Overseas says it is operating campaign offices in Jerusalem, the Jerusalem suburb of Modi’in and in Tel Aviv. Next week the campaign is planning to open a field office over the Green Line in the town of Ginot Shomron — a first for an Israeli settlement, according to Republicans Overseas.

“We have been told that this is the biggest campaign outside the U.S.,” said Tsvika Brot, a campaign operative who has worked for the Likud Party and who was hired by Republicans Overseas to head up the Trump effort. “The Republican Party here understands that this is the only country in the world in which oversees voters are overwhelmingly Republican.”

Brot and others who have worked on expat voting in Israel estimate that in previous elections anywhere from 40,000 to 80,000 voters cast ballots. If that’s a fraction of the millions of voters who will decide the election in the U.S., why would anyone care about the expat vote in Israel?

With some 300,000 American citizens living in Israel, both Republican and Democratic activists say that the expats residing in the Jewish state could theoretically swing the election in case of a close contest. They point to the 2000 presidential election, in which former President George W. Bush edged out Vice President Al Gore in Florida by several hundred votes — giving him a majority in the Electoral College even as he lost the popular vote.

Republican activists here believe that the Americans residing in Israel are a mirror image of U.S. Jewish voter preferences. In 2012 American Jews supported President Obama by a 69 percent-to-30 percent margin over Mitt Romney; in 2008 Obama won the Jewish vote over John McCain by a 78 percent-to-22 percent margin. And a recent poll of Jewish voters in Florida found Hillary Clinton with a gap of some 40 percentage points over Trump.

However, Republican activists claim that Americans here overwhelmingly supported Romney in 2012 and will give a solid majority to Trump.

Republicans in Israel explain that disparity by saying that the American voters here cast their ballots based on U.S. policy toward Israel rather than domestic issues.

“When you are here, Israel and foreign policy issues become a bigger issue than gun control policy,” said Abe Katsman, one of the leaders of Republicans Overseas. “Fair or not, the Republicans are much more aligned with what the Americans here perceive as their interest.”

The political organization — which says it does not get money from the Republican National Committee or the Trump campaign — cites a poll of absentee voters conducted during the 2012 election that found that 85 percent of Israeli residents here voted for Romney. The poll was taken by iVote Israel — a nonpartisan organization that sought to boost registration and turnout.

Democratic Party activists in Israel contend the iVote poll was based on a deliberately skewed voter sample and that iVote Israel’s real aim was to drum up votes for the Republican candidate. They claim that the actual partisan breakdown from Israel is closer to the general American Jewish voting patterns. Both sides say that beyond the iVote Israel figure there are no other known measures of the vote from Israel.

“The breakdown of support for Democrats and Republicans in Israel can be based on demography; if you live in Tel Aviv, Haifa, Beersheva, on a kibbutz,or are a student at one of the major Israeli universities, you most likely support the Democrats and Hillary Clinton,” said Hillel Schenker, a former chairman of the Democrats Abroad chapter in Israel, in an e-mail statement.

“This is also true for many, many recent arrivals, young high-tech people, entrepreneurs, consultants, artists and civil society activists. American-Israelis who live in West Bank settlements, or study at an ultra-Orthodox yeshiva, are more likely to vote Republican. And given the racist campaign that Trump has been running, there will also be moderate settlers and ultra-Orthodox American-Israelis who will vote for Clinton.”

The Republicans say that they are focusing on specific Israeli regions known to have high numbers of Americans: Jerusalem, the suburbs of Beit Shemesh, Modi’in and Ra’anana; the Gush Etzion settlement bloc just south of Jerusalem and settlements in the northern West Bank.

They are betting that President Barack Obama’s criticism of Benjamin Netanyahu’s government for its policies toward the Palestinians, and the president’s nuclear compromise with Iran, will fan desire among Americans here for a Republican president. They are portraying Hillary Clinton as a direct continuation of the Obama policies. Alongside Trump’s “Making America Great Again” slogan, the Republicans have come up with a Hebrew slogan: “Trump. The Israeli interest.”

They are also getting indirect support in the form of sympathetic campaign coverage from Yisrael Hayom, the pro-Netanyahu Hebrew tabloid financed by American Jewish Republican Sheldon Adelson. Brot, the Republican campaign chief, is a former journalist who was part of the Likud communications team during the 2013 parliamentary election, and was offered a job as Netanyahu’s chief communications officer a year ago. He is not an American citizen.

Brot said that he plans to boost turnout by targeting younger voters whose parents immigrated to Israel. He believes that Israeli residents are concerned that Clinton will continue the friction with the Netanyahu administration over the last eight years. “They believe that Trump will be much more friendly,” he said.

Republican activists also noted that the convention platform committee removed a reference to a two-state solution, and that Trump won’t condemn Israel for settlement expansion.

Still, they will be fighting against a Democratic candidate whose “Clinton” brand is relatively strong among Israelis who remember when she came with President Bill Clinton to the funeral of Prime Minister Yitzchak Rabin after he was assassinated in 1995. In April, a poll conducted by Israel’s Channel 1 news found that 42 percent of Israelis thought Clinton would be a better president for Israel, while 34 percent said Trump would be better.

And they will also face the angst over Trump among Republicans themselves: Mark Zell, the chairman of Republicans Oversees, says he previously supported Marco Rubio before switching his allegiance to Trump after the conclusion of the primary campaign.

“It’s no question — Trump is a more controversial character, and he may not be the ideal candidate in the eyes of many people,” said Katsman. “People are going to have to make a choice: It’s not a choice between Trump or no Trump. It’s either Trump or Hillary Clinton. At the end of the day, the same people who voted for Romney are going to see that a Trump administration is going to be a lot better than a Hillary administration.”