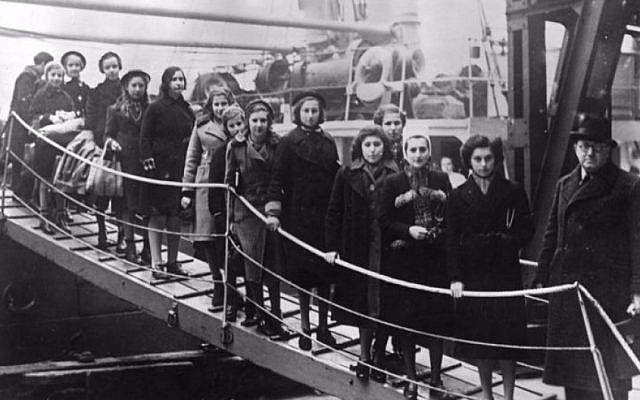 Jewish children boarding ship as part of a kindertransport out of Nazi occupied Europe. (Courtesy of Pamela Sturhoofd via Times of Israel)

BERLIN — Germany has agreed to one-time payments for survivors, primarily Jews, who were evacuated from Nazi Germany as children, many of whom never saw their parents again, the organization that negotiates compensation with the German government said Monday.

The New York-based Conference on Jewish Material Claims Against Germany said the government in Berlin had agreed to payments of 2,500 euros ($2,800) to those still alive from among the 10,000 people who fled on the so-called “Kindertransport.”

This year is the 80th anniversary of beginning of the transport of the children to Britain from Nazi Germany and elsewhere in Europe.

About 1,000 survivors are thought to be alive today, with about half living in Britain, and the payment is seen as a “symbolic recognition of their suffering,” Claims Conference negotiator Greg Schneider said.

“In almost all the cases the parents who remained were killed in concentration camps in the Holocaust and they have tremendous psychological issues,” Schneider told The Associated Press.

Following the Nazis’ anti-Jewish pogrom in November 1938 known as Kristallnacht, or the Night of Broken Glass, the British government agreed to allow an unspecified number of Jewish children as refugees from Nazi Germany or territories it had annexed. 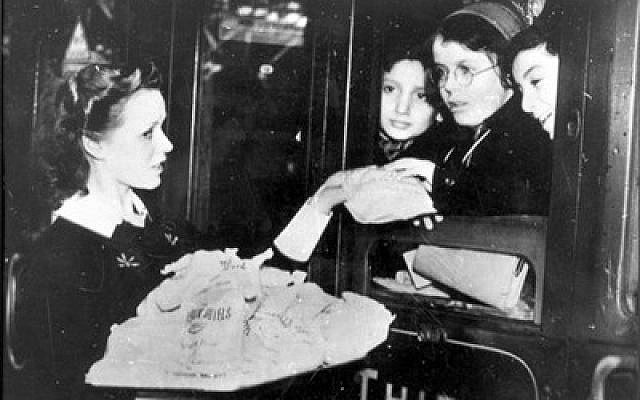 Candies are distributed to children who arrived in Southampton, England on a Kindertransport. (Conference on Jewish Material Claims Against Germany via Times of Israel)

Jewish groups inside Nazi Germany planned the transports, and the first arrived in Harwich on December 2, 1938, according to the United States Holocaust Memorial Museum. The last transport from Germany left September 1, 1939 — the day World War II broke out with the Nazi invasion of Poland — and the final transport from continental Europe left the Netherlands on May 14, 1940, the same day Dutch forces surrendered to the Nazis.

In all, about 10,000 children from Germany, Austria, Czechoslovakia and Poland were taken to Britain, about 7,500 of whom were Jewish, according to the museum. About half were placed with foster families, while the others stayed in hostels, schools or farms.

In addition to those who remained in Britain, many resettled in the US, Israel, Canada, Australia and elsewhere, Schneider said.

Today, survivors are at least in their 80s and most continue to look back on their escape as the defining moment of their lives as they were put alone onto trains into the unknown, saying goodbye to parents and siblings often for the last time, Schneider said.

“This money is acknowledgement that this was a traumatic, horrible thing that happened to them,” he said.

Stuart Eizenstat, Claims Conference Special Negotiator, added: “After having to endure a life forever severed from their parents and families, no one can ever profess to make them whole; they are receiving a small measure of justice.”

Some survivors already received small payments in the 1950s but that will not bar them from receiving the new benefit, the Claims Conference said.

The Kindertransport Fund will begin processing eligible applications after it officially opens on January 1, 2019, the conference said in a statement. 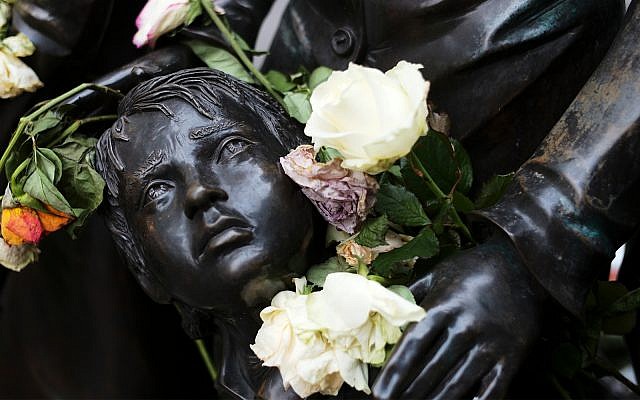 Flowers are placed on a commemorative statue dedicated to perpetuating the memory of the ‘Kindertransport’ (children transport), near Friedrichstrasse train station, in central in Berlin, Germany, Monday, Dec. 17, 2018. (AP Photo/Markus Schreiber via Times of Israel)

The Claims Conference carries out continuous negotiations with Germany to expand the number of people eligible for compensation.

Since 1952, the German government has paid more than $80 billion to individuals for suffering and losses resulting from persecution by the Nazis.

In 2019, the Claims Conference will distribute approximately $350 million in direct compensation to more than 60,000 survivors in 83 countries, the organization said. In addition, it will provide some $550 million in grants to social service agencies that provide home care, food, medicine and other services for Holocaust survivors.