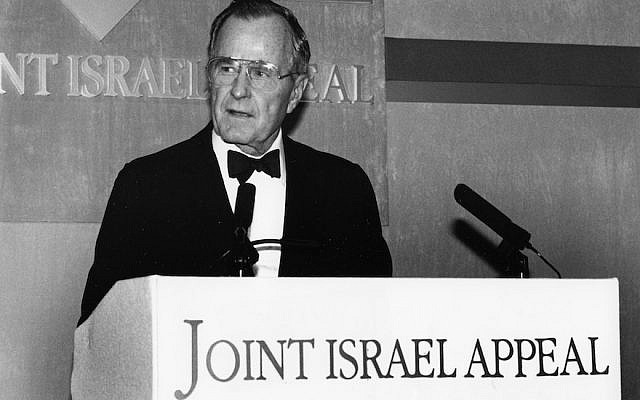 WASHINGTON (JTA) – George H. W. Bush, the one-term president whose public grappling with Jewish leaders made headlines while his private interventions helped bring tens of thousands of Jews out of danger, has died.

Bush, 94, died Friday at his home in Houston, his family said, less than a year after his beloved wife, Barbara, died.

Bush’s failed 1992 reelection bid marked a low point in relations between Republicans and the Jewish community. Bush scored just 11 percent of the Jewish vote in that contest, one-third of what he garnered four years earlier, his 1988 victory over Michael Dukakis.

The Bush presidency was marked by tensions both with Israeli Prime Minister Yitzhak Shamir and the American Jewish leadership.

In 1991, Bush lashed out at pro-Israel activists who had flooded Congress in response to the president’s reluctance to approve loan guarantees requested by Israel to help absorb hundreds of thousands of Jews from the just-collapsed Soviet Union.

Bush called himself “one lonely guy” battling “a thousand lobbyists on the Hill.” Jewish leaders resented the insinuation that the pro-Israel community was possessed of a power sinister enough to unsettle the leader of the free world as borderline anti-Semitic. The “one lonely guy” comment haunted Bush thereafter, with even Republican Jews apt to use the first Bush presidency as a signifier of how far they had traveled in attracting Jewish support.

Yet, that was hardly the whole story. Less remembered was how, as Ronald Reagan’s vice president, Bush quietly helped engineer some of the pivotal moments in the effort to bring Jews out of the former Soviet Union, Ethiopia and Syria.

“When you add up the Jews he saved, he will be a great tzaddik,” Abraham Foxman, the Anti-Defamation League’s former national director, said in 2013, using the Hebrew word for “righteous man.”

Bush was deeply involved in foreign policy as vice president, and Jewish leaders said he helped orchestrate the dramatic seder hosted by Secretary of State George Schultz at the American embassy in Moscow in 1987.

He also ignored advice from much of his national security team in 1991 – the very period when he was in the throes of his most difficult arguments with Jewish leaders – and approved American overtures to the Mengistu regime in Ethiopia that resulted in Operation Solomon, which brought 15,000 Jews to Israel. Among other things, Bush secured a “golden parachute” for Mengistu Haile Mariam, the dictator who was already plotting his escape to luxurious exile in Zimbabwe.

Bush was also instrumental in persuading Hafez Assad, the Syrian dictator, to allow young Jewish women to leave Syria for New York so they could be matched with men in the Syrian Jewish community.

While some of these actions were secret at the time, Bush was averse to claiming responsibility even in subsequent years.

“He was a man who was old school,” said Marshall Breger, who was the liaison to the Jewish community under Reagan and Bush. “With him, you had the sense of him being private about his feelings and sensitive to the notion that he might be seen as vain and saccharine towards other with overstatements.”

Breger recalled traveling in the backseat of a car with Bush to dedicate the new quarters of the National Museum of American Jewish Military History, in 1984. Part of the dedication included the affixing of a mezuzah, and Breger attempted to hand Bush a yarmulke. Bush wouldn’t take it.

Breger pointed out that he had secured a camouflage yarmulke for the occasion, but that seemed to make matters worse.

“I said, ‘You’ll need to wear one of these.’ And he said, ‘They’ll think I’m pandering.’ It was very much against his code to pander,” said Breger, now a law professor at Catholic University in Washington.

“I said, ‘First of all, they’ll think you’re appropriate, and second of all, they’d love you to pander,’” Breger recalled.

Bush reluctantly donned the yarmulke, but Breger noticed he had removed it before the ceremony concluded. 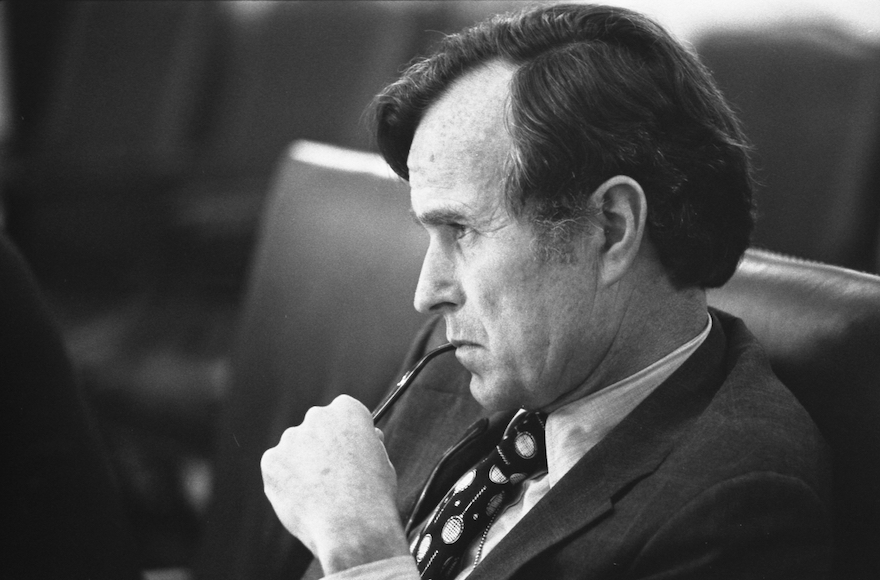 Bush’s intense privacy came across as stiffness and allowed his rivals to portray him as patrician and distant. Two moments in the 1992 election helped alienate the public from the president whose masterful handling of the first Persian Gulf War helped bury post-Vietnam War ambivalence about the military.

His apparent surprise at supermarket scanner technology suggested he was unfamiliar with the mundane chores of average Americans. Though the story was debunked — Bush was familiar with the device, but was amazed at a new generation scanner on display at a grocery convention in Florida — the image stuck.

At a town hall meeting in Exeter, New Hampshire during the primaries, looking at notes, Bush read out aloud, “Message: I care,” not realizing it was advice from one of his aides. The phrase became an emblem of his awkward inability to connect.

Still, public service was a natural draw for George Herbert Walker Bush, whose father, Prescott Bush, was a U.S. senator from Connecticut. In later years, he would recall how natural it seemed to enlist in the Navy after graduating from the elite Andover Academy in 1942. He became a bomber pilot and earned the Distinguished Flying Cross after the Japanese shot him down in 1944.

A year later, he married Barbara Pierce, and like his forebears, attended Yale University. Seeking to make his own way in life, he declined his father’s offer of a job at an investment banking firm and headed to Texas, where he plunged into the oil business. First he sold supplies and within years he was an oilman.

But Bush couldn’t resist the call of public service, and by the end of the 1950s he was active in the state Republican Party. In 1966, he was elected to Congress — a signal achievement at that time for a Republican from Texas.

In Washington, he soon forged friendly ties with national Jewish groups. Appointed ambassador to the United Nations by Richard Nixon in 1972, he made headlines when he canceled an appearance on the Dick Cavett show after Jewish leaders asked him not to lend legitimacy to another Cavett guest the same evening. The guest was Meir Kahane of the Jewish Defense League, whose radical and at times violent advocacy had alienated the Jewish establishment.

Bush wrote Cavett at the time that he had checked with “certain responsible, highly respected leaders of national Jewish organizations” who convinced him that “any move by me that would have even the slightest appearance of giving recognition or credence to Kahane would damage the serious productive and legal efforts that they and thousands of their fellow Jews have been making to alleviate the suffering of their brothers.”

At the United Nations, Bush made Soviet Jewry one of his signature issues, and the Jewish community organized a tribute dinner for him in 1973 after he left his post.

His concern for Israel and its relationship with the United States was evident again in 1976, when he was director of the CIA. Bush was furious that CIA officials had estimated in a semi-public forum that Israel had 10-20 nuclear weapons ready for use. Since the 1960s, the joint U.S.-Israel protocol has been neither to confirm nor deny Israel’s alleged possession of nuclear weapons.

In a statement that year to JTA, Bush would not address the apparent revelation, but added: “To the degree that any classified information might have been mentioned, I accept full responsibility. I am determined it will not happen again.”

Bush ran a contentious primary against Reagan in 1980, then accepted his offer as running mate. He assumed critical foreign policy roles under Reagan, but the two men never grew close. Reagan barely stumped for Bush in 1988.

Still, the departing president did his successor a favor in early 1989, giving the go-ahead for low-level U.S.-Palestine Liberation Organization relations. Bush would have faced a political firestorm had he initiated such ties, but he needed them to pave the way to one of his grand ambitions: corralling the Middle East cats into a new world order of peace, led by what was fast becoming the world’s only superpower.

Bush’s patrician lèse-majesté irked Israeli officials, especially Prime Minister Yitzhak Shamir, whose rough youth as the child of parents murdered by their Polish neighbors, and then as a pre-state terrorist, could not have contrasted more with Bush’s upbringing.

In “A World Transformed,” the recounting of his presidency Bush cowrote with his National Security Adviser, Brent Scowcroft, Bush commends Shamir for making the unpopular decision not to strike Iraq during the 1991 Gulf War despite the raining of missiles on Israeli cities.

Just pages later, Bush wonders why Shamir was unenthusiastic about joining the Madrid peace conference the United States had convened after the war. Bush writes that he expected a degree of gratitude from Israel for protecting it during the Gulf War – apparently not realizing that it was precisely this unwanted protection that stirred resentment among Israelis fiercely committed to protecting themselves.

The diplomatic clashes did not abate. In June 1990, Bush’s most trusted adviser, James Baker, appearing before the U.S. House of Representatives Foreign Affairs Committee, asked for a little “good faith” from Shamir. “When you’re serious about peace, call us,” Baker said, addressing a virtual Shamir, and gave the number for the White House switchboard.

In March 1992, Ed Koch, the former New York City mayor, wrote that Baker had dismissed concern about Jewish anger saying, “Fuck the Jews, they don’t vote for us.” Baker adamantly denied it.

Fred Zeidman, a Houston area businessman and GOP fundraiser who is friendly with the Bush family and with Baker, said the remark has long been misunderstood. Baker was aiming his ire at another Cabinet member, Zeidman said, and intended it as a joke.

By mid-1992, with his presidential campaign underway, Bush seemed irreparably wounded in the eyes of the Jewish community. The strong primary performance by Pat Buchanan, a culture warrior known for meandering occasionally into Jew-baiting, didn’t help. Nor did Buchanan’s apocalyptic keynote speech at the convention that summer.

Jewish leaders have said that in encounters with Bush since his presidency, they endeavored to make clear to him how dear to the community he is. Malcolm Hoenlein, the executive vice president of the Conference of Presidents of Major American Jewish Organizations, recalled meeting with Bush not long after his “one lonely guy” remark.

Bush had tears in his eyes, Hoenlein said, and insisted he never intended offense. “I led my whole life differently,” Bush told the delegation.

Bush rarely interacted with Jewish leaders after his presidency, and he never knew the adulation his son would earn in some Jewish quarters for his devotion to Israel.

The younger Bush seemed in some ways to directly contradict his father’s policies. One of the elder Bush’s first acts was to set in motion the process that would eventually welcome PLO leader Yasser Arafat into the American sphere. The younger Bush decided from the outset of his presidency to isolate Arafat, whom he reviled as an unrepentant terrorist.

“I believe he will go down in Jewish history as the president who was engaged in more initiatives to save more Jews in countries where they were being persecuted,” he said.