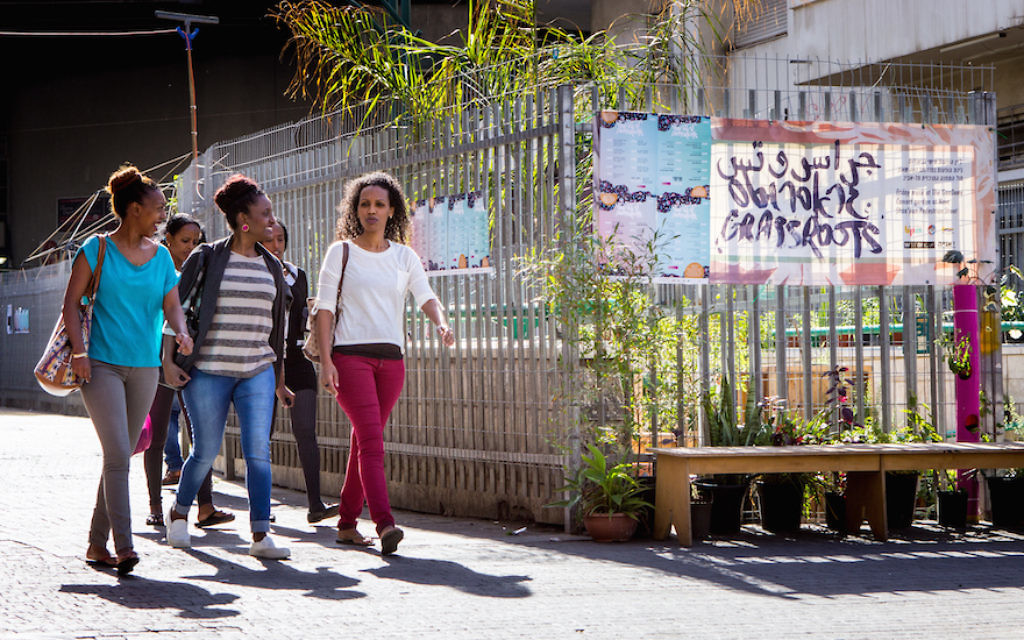 Tel Aviv — The teeming blocks around this city’s New Central Bus Station are anything but scenic. Packed with humanity at every hour of the day, they are dizzying monuments to urban blight: equal parts graffiti, chaotic traffic and bustling, black-market commerce.

So on a sunny Friday last month, just across the street from the labyrinth-like station — a hulking seven-story monolith where entire floors lay abandoned — it was a surprise to find the gates of a thriving urban garden thrown open. Bongo drums, organic pastries and children’s art projects were all being shared there among the potted cacti, flowering eucalyptus and verdant vertical gardens built, using upcycled wooden pallets, into the walls of an underpassage.

This dilapidated neighborhood of South Tel Aviv has long been known for its grit, not its green spaces. This is where you come to buy a hot bicycle, its lock sliced just hours earlier a few blocks north. It’s the place to find all varieties of Indian and Filipino spices; bands of African migrants strolling five or six abreast and off-duty prostitutes gossiping beneath graffiti-splattered awnings. Unless they’re catching an intercity bus or want to purchase some off-label electronics, most Tel Aviv residents steer clear of this part of town entirely.

South Tel Aviv has become home to the vast majority of Israel’s nearly 50,000 African migrants and refugees. As the Israeli government vacillated on how to handle the influx, the neighborhood’s Jewish residents cried out about a spike in crime that has come in tandem with the influx. Today, South Tel Aviv’s shoulder-to-shoulder communities of migrants, legal foreign workers and Jewish-Israelis who share this cramped space all accuse the government of abandoning them.

But some grassroots organizations are seeking to nourish community life in this urban Israeli jungle. City-funded social workers are helping low-income mothers find health services for their children. Volunteers from the African Refugee Development Center are trading their evenings to offer legal services to asylum seekers. Meanwhile, activist gardeners are wielding strawberry patches and bell peppers amid the concrete, and feminist activists are forcing a dialogue between the area’s partitioned racial groups. The times — along with the atmosphere — are a-changing here, as they say.

“It’s the most neglected and hardcore area in Tel Aviv,” says Robert Ungar, an architect who heads up the Onya Collective. The organization — whose vision is, according to its web site, to “pimp your hood with some o that eco-lovin'” — is behind the area’s new garden. Onya’s weapons of choice are soil and seeds, and it believes in harnessing the power of plants and green space to bring positive change to urban spaces. “It’s so dense and polluted, and no organization is really taking it on,” Ungar says of the area. “This is our biggest challenge.”

A handful of herbs and flowers may not be enough to turn the tide of a neighborhood, but it’s a start. The garden’s appeal was enough to lure in Dor Zolta, a 28-year-old who grew up in nearby Holon. He said that before Onya’s event, he had only ventured to South Tel Aviv to catch a bus or train.

“It doesn’t matter so much what they are doing to make the place better, as long as it’s a step in the right direction,” Zolta says, sipping a beer while taking in the funky roots-rock of the band OSOG. “I’ve never been to the neighborhood before to hang out, and this sort of event can make the people who live here feel a responsibility over the neighborhood and maybe take care of it themselves.”

While Tel Aviv’s northern beaches, hotels and restaurants have shot to the top of tourism blogs’ must-visit lists, South Tel Aviv has lagged behind. The dual forces of urban sprawl and geopolitical instability, which pushed businesses out while tens of thousands of African asylum seekers streamed across Israel’s borders, have changed the fabric of this enclave.

“[The government of Israel] has preferred to exploit the situation of South Tel Aviv and xenophobia among the general public to serve their own political interests rather than truly help the people there,” says Elliott Glassenberg, a local activist and teacher at the Bina Secular Yeshiva that sits a stone’s throw from the bus station.

Glassenberg is passionate about improving life for Africans who live in the area, and also securing the closure of the Holot Detention Center, the isolated open prison complex in the Negev Desert, where hundreds of migrants are being held for entering the country illegally. Groups like the Onya Collective, he says, bring immense value to the neighborhood by fomenting a sense of community.

But there is a risk to their work, as well – a risk that the residents of any city that has seen gentrification transform its streets can tell you about. The residents of South Tel Aviv deserve a safer and cleaner space to live in, activists say. The risk is that as their neighborhood changes, the cost of living there will, too.

“It’s great when you have young, hip artists who want to bring a sense of youth and community into a neighborhood,” Glassenberg says. “But it’s always a little from column A and a little from column B. A lot of times people from lower socioeconomic backgrounds are at a loss because they want their quality of life to improve, but when it does, rent and housing costs go up, as well.”

Jaffa and Florentin, two neighborhoods that border the ring of tough streets around the Central Bus Station, have been transforming over the past decade; quaint boutiques, microbreweries and high-rises are now ubiquitous there. And as community initiatives have slowly begun to take root in the grittier South Tel Aviv enclaves of Neve Shaanan, Shapira and Hatikva, developers have started to take note. Handfuls of land plots in the area have already been purchased, and luxury condos are being planned alongside the crumbling slums that dot these crowded streets.

Since 2000, the city of Tel Aviv has established its own independent organization, Mesila, to offer aid and educational outreach to migrants and foreign workers. It has smoothed out some of the area’s most potholed roads; at night, new streetlights and police patrols have cut down drastically on crime. Community initiatives like Hyde Park Levinsky have brought Jewish and foreign residents together at the local Levinsky Park, much in the spirit of the Sunday soapbox orators who have discussed ideas in London’s Hyde Park for a century. It’s a start, says Ungar. But there are problems he isn’t willing to wait for the government to fix.

“There’s been a shift in the city’s attempts to try and solve the problems in South Tel Aviv, yes,” he says. “They’re fixing streets and helping security. These are heavy actions. But no one is talking about the things that aren’t basic. Green space is not basic. Culture and community is not basic. Very little is being done to create and strengthen community, which is vital.”

The Onya Collective got started last year when a group of its core volunteers took over the Central Bus Station’s derelict roof as part of the global urban art initiative Worldwide Storefront. That project, which brought forth a reading corner, a strawberry patch and an hydroponics station in a forgotten radio studio, brought the all-volunteer collective a fair amount of local press and encouraged them to launch an even bigger project: a soil-less urban garden built by both Israeli and immigrant communities in the heart of the neighborhood.

Most days, the little garden – a festive mishmash of hardy potted plants, strings of lights and hanging paper maché projects – is locked for lack of operational budget. Ungar hopes that will eventually change.

“Everyone passes the responsibility for South Tel Aviv onto someone else, and what happens is it allows creative initiatives like us to grow because there are gaps in this city that nobody takes care of,” he says. “We’re growing within these cracks.”