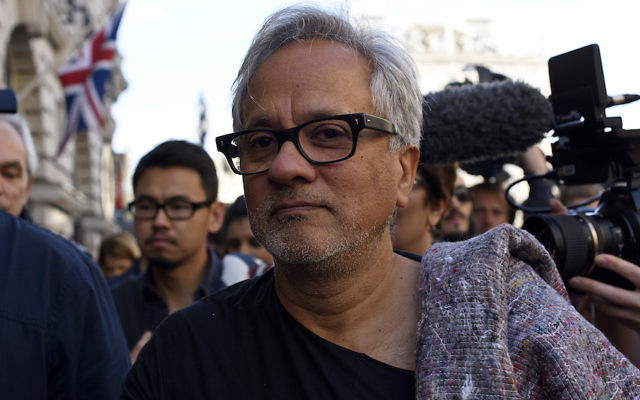 Artist Anish Kapoor, pictured here participating in a solidarity march in London for migrants crossing Europe, is the recipient of the 2017 Genesis Prize. JTA

The Genesis Prize will not hold its annual award ceremony at the request of 2017 recipient Anish Kapoor, a refugee advocate who deemed a celebration inappropriate in light of the worsening Syria crisis.

Kapoor, an influential artist and social activist, and the Genesis Prize Foundation “agreed that in light of the escalating war in Syria and the resulting deterioration of the refugee situation there, it would be inappropriate to hold a festive ceremony to honor Mr. Kapoor and his work on refugee issues while children are being killed with chemical and other horrible weapons on Israel’s doorstep,” according to a statement by the foundation awarding the prestigious $1 million prize.

The statement cited a chemical attack and a bus bombing in April that led to a total of more than 200 casualties.  Instead of holding a ceremony, the foundation said, it would raise funds to aid Syrian refugees.

The Bombay native, who moved to Israel at 16 but has been based in the United Kingdom since the 1970s, said in February that he will use his award to help alleviate the Syrian refugee crisis and try to expand the Jewish community’s engagement in a global effort to support refugees.

The Genesis Prize recognizes individuals who have attained excellence and international renown in their fields and whose actions and achievements express a commitment to Jewish values, the Jewish community and the State of Israel. It is awarded by the Genesis Prize Foundation in partnership with the Office of the Prime Minister of the State of Israel and the Jewish Agency for Israel.

Kapoor’s works include “Turning the World Upside Down” at the Israel Museum in Jerusalem, “Cloud Gate” at Chicago’s Millennium Park and the “Orbit” in London. Kapoor also created the Holocaust memorial for the Liberal Jewish Synagogue in London and the 70 candles for Holocaust Memorial Day in Britain in 2015, commemorating the 70th anniversary of the liberation of Auschwitz.