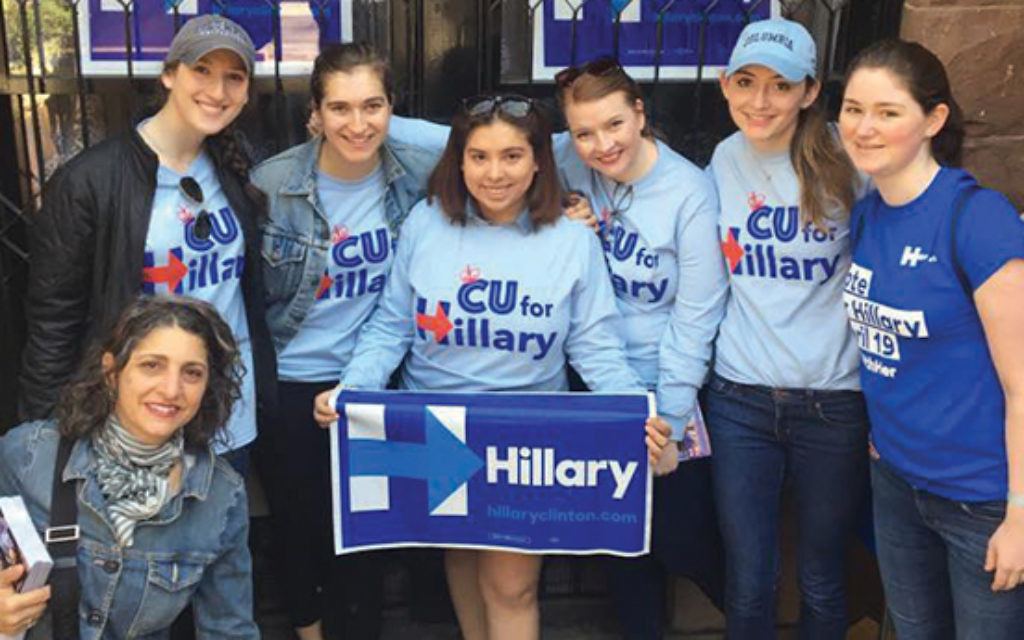 With presumptive Republican presidential nominee Donald Trump calling out Hillary Clinton for “playing the woman card,” it seems all but certain that gender will be a key issue in the general election.

A highly charged aspect of the gender issue — the kind of feminism that emerges in the wake of Vermont Sen. Bernie Sanders’ historic appeal to millennial women — has particular resonance in the Jewish community.

On the quad at Harvard, as in many other places, no doubt, a “post-gender” millennial cohort — one that envisions a feminism more tied to policy than identity — is squaring off against a more traditional, Gloria Steinem-type feminism. But that debate, which is likely to outlive Sanders’ candidacy, comes with a religious dimension that shapes the issue for many young Jewish women.

Ari Berman, a freshman at Harvard and a proud Conservative Jew, is an avid Clinton supporter. “I would like to say gender doesn’t matter to me, but honestly, it does,” she said.

Though supporting Clinton “because she’s a woman” is a taboo argument among her peers, Berman said that Clinton’s gender plays a major role, even if her fellow classmates don’t admit it. “It’s just impossible to rule out gender in this case — electing the first-ever female president would be too historic.”

For Berman, her religious upbringing spurred her passion for politics. “From a young age, I was surrounded by women in positions of religious leadership — at my synagogue, at my schools,” said Berman, who attended Jewish camps and United Synagogue Youth growing up. The experience shaped her feminist worldview. “It made me want to run for office some day.”

Kara Lessin, a Harvard senior and a “cultural” Jew, is more of a “typical” millennial. Though she has a deep appreciation for the struggles feminists have faced over the decades, she’s still “feeling the Bern,” but now seems resigned to vote for Clinton, despite not liking many of her policies.

“I’ve studied history, I know how incredibly hard women have fought to be in politics,” said Lessin, who is studying women, gender and sexuality. “Still, I subscribe to a brand of feminism that focuses more on policies and less on identity.” She termed it “intersectional” feminism — a feminism that values several factors, including race and social class, alongside gender. “The ‘special place in hell’ brand doesn’t work for me,” Lessin said, referring to former Secretary of State Madeleine Albright’s comment at a New Hampshire rally in February that “there’s a special place in hell for women who don’t help each other!”

For Lessin, “It doesn’t change the fact that I’m skeptical about the way Hillary thinks about privilege and people who don’t have it.”

The kind of “intersectionalism” that Lessin describes isn’t so much in play for those with a more religious orientation. For Orthodox feminists, the rigidity of gender roles in the community often inspires a more “traditional” feminist outlook.

“I simply can’t take off the gender lens because I grew up Modern Orthodox,” said Yael Reisman, 33, the director of a progressive Jewish women’s organization. “It’s a part of the way I see everything.”

Though many of her peers are quick to disregard gender as a significant factor, her support for Clinton cannot be divorced from her conviction that gender matters, she said. “The symbolic significance that Hillary holds for the older generation of feminists is one that deeply resonates with me.”

Though Reisman often wishes that Orthodox feminism would “catch up with regular capital F feminism,” the community’s strict mores and gender roles often hold it a step or two behind the general society, she said. (In November of 2015, the Rabbinical Council of America, the largest coalition of Orthodox rabbis, reaffirmed their ban on women entering the rabbinate.)

Tamar Dayanim, a freshman in the Barnard College and Jewish Theological Seminary joint-degree program, helped spearhead Columbia University Students for Hillary, a fairly small but growing campus group. (Columbia University Students for Bernie is significantly larger.) Her experiences growing up in the Modern Orthodox community of Silver Spring, Md., had a great impact on her political and feminist leanings.

“In the Orthodox community, and in the Jewish day-school environment, girls often experience the word ‘can’t’ when it comes to spiritual leadership,” said Dayanim. In her Orthodox high school, girls were not given active roles in tefillah services and were not offered the same options in Talmud study. (The curriculum has since been changed to provide more equal offerings.)

Experiencing the “glass ceiling” in the religious realm fueled her desire to see other glass ceilings broken, she said. “Hillary has opened the door to the concept that women can take on active leadership roles in their communities and achieve success at the top levels,” she said. Clinton’s example has inspired her to test the limits of her role in the Orthodox community — today, she is very involved in leading a partnership minyan on campus. “Instead of being shot down, her [Clinton’s] example has challenged me to be a community leader.”

“A lot of my friends in the Jewish community prefer ‘traditional’ feminism to ‘new age’ feminism,” said Judith, 24, a Modern Orthodox feminist working in Washington, D.C. (She preferred to only use her first name because of the political nature of her work.)

“It’s the conversation at every Shabbos meal,” she said, laughing. “Personally, I think a woman in the White House would bring such a different angle and perspective to the table. I’m voting for Hillary for many reasons, but being a woman is one of the important ones.”

Sharon-Weiss Greenberg, executive director of the Jewish Orthodox Feminist Alliance (JOFA), noted that strong support for Clinton in the political realm can be a “coping mechanism” for Orthodox feminists who feel limited by their traditional community roles.

“Having a political platform for feminism is a way to lead a bifurcated life,” she said, explaining how the idea of Clinton’s presidency is encouraging for Orthodox feminists. “When it comes to shul, many have accepted taking a step back and appreciating tradition for what it is. Politics becomes an outlet.”

Shoshanah Weisinger, 24, a computer programmer and politically active Orthodox feminist, said supporting Clinton has caused her to think about her roles as an Orthodox woman more critically. “I hear apologetics all the time — [the publisher] Artscroll has done a good job trying to explain away why the Talmud says women’s brains aren’t as formidable as men’s. I understand why women in our community are frustrated — I understand why they want to be at the pulpit. I get why people leave our community for more egalitarian options. Clinton’s second run has made me think about these issues over again.”

Leah Sarna, a second-year student at Yeshivat Maharat, the only Orthodox rabbinical school to ordain women, believes strongly that women should be able to “activate their potential in the fullest way possible.”

“The presidential race is essentially about service — what does someone need to govern well,” she said. “I firmly believe Hillary is the most qualified person to fill the role. She wants power for service, not power for the sake of power.”

Though she has noticed that fellow young feminists are “less interested in women gaining top positions and more interested in everyday micro-aggressions and the culture of sexual assault on campus,” Clinton’s ascendance would be a an overall win for feminism, she said.

And what of Generation Z, the one following on the heels of the millennial cohort?

Abby Richmond, 15, won’t be voting in this election, but she is an avid Clinton supporter and a Rising Voices fellow at the Jewish Women’s Archive, a fellowship for female teens particularly interested in gender and equality. A sophomore at Newton North High School in Newton, Mass., outside of Boston, she spends significant time defending Clinton to her liberal-minded peers, most of whom support Sanders. Last month, on JWA’s Rising Voices blog, she posted an article called “Halt the Hillary Hate.” (It was posted before Ted Cruz dropped out of the race.)

“My incredibly liberal high school peers have decisively picked out the candidates they hate. Names such as Donald Trump and Ted Cruz are thrown around every day with disgusted sighs and long, negative Facebook posts. Another name included in this list of villains? Hillary Clinton,” she wrote.

“It’s really frustrates me that Hillary is openly scorned at my high school,” she said. “People just think all millennials support Bernie — I’m a young person and I love Hillary.”

Though she said Clinton’s gender is a secondary reason for her love and admiration, her win would be “incredible” for women’s rights. “As a feminist, her views resonate deeply.”

Richmond grew up as a Conservative Jew, and the strong female role models at her Jewish day school and Reform temple inspired her passion. “I grew up where most of the teachers and rabbis were women,” she said. “For me, being female and being a leader always went hand in hand. Why not in the White House?”