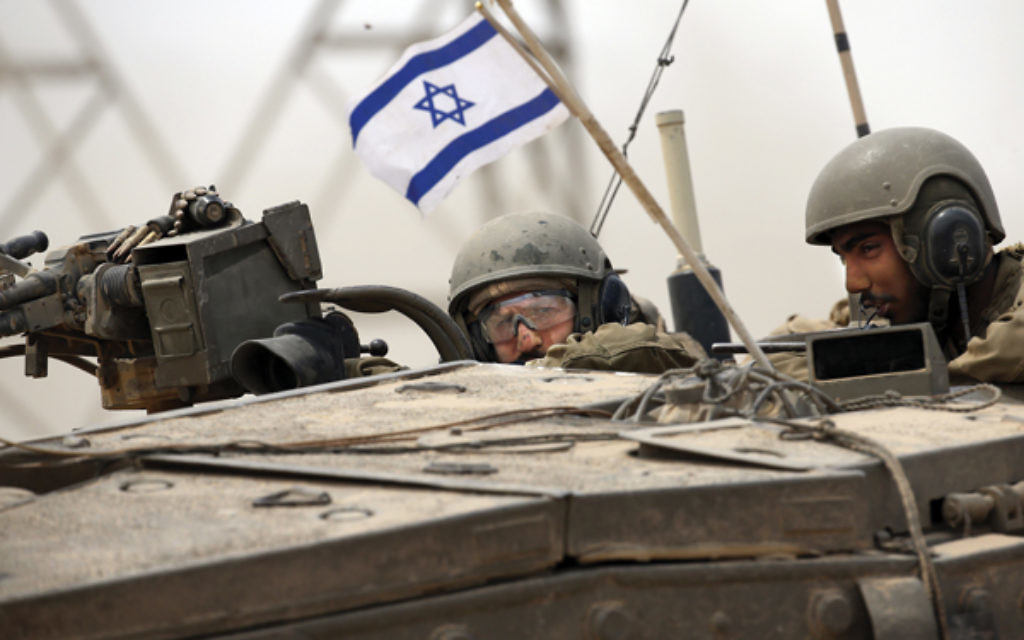 When New York-area rabbis deliver their most important sermons of the year next week, in front of a slew of congregants they may see only once or twice, many will be stepping on the Jewish community’s third rail: Israel.

And hoping not to get shocked.

In a departure from recent years — brought on by this summer’s war in Gaza and the rising anti-Semitism it spurred in Europe — spiritual leaders will likely be tackling “the elephant in the room,” as Rabbi Maurice Appelbaum of Congregation Ahavas Israel in Greenpoint, Brooklyn, put it. And doing it gingerly. Even rabbis who might ordinarily gravitate toward more spiritual topics for Rosh HaShanah sermons say their hands are being forced this time around.

“The past summer has elevated [issues surrounding Israel] in everyone’s consciousness, and addressing them has taken on even greater urgency,” said Rabbi Joshua Davidson of Temple Emanu-El on the Upper East Side, one of more than a dozen rabbis interviewed for this story.

It’s hard to overstate what a change this represents. For years, especially since the rise of J Street, the self-described pro-Israel, pro-peace lobby, Israel has been a toxic issue in synagogues. And many rabbis have simply taken it off the table as a topic of discussion, viewing it as too divisive. Even in politically and religiously progressive congregations, schisms have opened up: Some members of B’nai Jeshurun on the Upper West Side were angered when two of its congregation’s rabbis joined other leading New York liberals in signing a January 29 letter critical of Mayor Bill de Blasio for his unquestioning support of AIPAC, the pro-Israel lobby in Washington.

And in Greenwich Village, Rabbi Sharon Kleinbaum of Congregation Beth Simchat Torah, the city’s gay and lesbian synagogue, came under fire this summer from a board member for what he called the rabbi’s insufficient support of Israel; she read the names of Gaza casualties at a Friday night service, and the synagogue’s Facebook page included a link to a fundraiser sending potatoes to Gaza. The board member resigned, and the rabbi, who recently spent a few weeks in Israel in preparation for the High Holy Days, issued a statement saying that supporters of Israel can still question its policies.

Writing in the current issue of Reform Judaism, Rabbi Eric Yoffie, the movement’s former head, cites a 2013 study conducted by the Jewish Council for Public Affairs saying that one-third of 552 “mostly non-Orthodox rabbis” surveyed “said they repressed their true views about Israel for fear of clashing with leaders in their congregations.”

This year, the stakes for rabbis, especially non-Orthodox ones, seem higher than normal.

“It is a struggle,” said Rabbi Sheldon Zimmerman of the Jewish Center of the Hamptons. “For the first time in many years, there is a real sense [among many rabbis] about not knowing what they can say, what they cannot say.”

Stepping into that breach, Rabbi Zimmerman said he plans to discuss how people can keep faith — in God and in Israel — despite this summer’s bloody events.

Rabbi Rachel Ain of Sutton Place Synagogue in Manhattan said she will devote one sermon to the wider effects of the war — “the concept of Am Yisrael Chai [the people of Israel live]. By understanding the power of each of these words, our congregation will reaffirm its strong commitment to the people, state and land of Israel — especially in light of the news during Operation Protective Edge and a successful congregational trip that we took this past August, despite everything that was going on,” Rabbi Ain told The Jewish Week by email.

“Clearly, the situation in Israel is on everyone’s minds and hearts,” said Rabbi Zvi Romm of the Bialystoker Synagogue on the Lower East Side. “When we feel a connection to our brothers and sisters in Israel, we grow spiritually. For all of us — rabbis and laypeople alike — the soul-searching of the High Holy Days needs to include our asking ourselves how we can do more for Israel, and how we can strengthen our connection.”

According to anecdotal evidence, most rabbis next week will be speaking before congregations that have largely circled their communal wagons in defense of Israel.

“Beginning with the kidnapping of the three boys [on the West Bank in June] and continuing throughout the ensuing [military] campaign, my experience has been that the entire community has been more united than ever,” said Rabbi Yossi Mendelson of Congregation Machane Chodosh in Forest Hills. “People that I had not heard from in years were calling me and saying, ‘What can we do for Israel?’ There is a sense that this time the stakes are real; the sense is also that the danger is not over with the cease-fire.”

In light of the belief in some quarters of the Jewish community that media coverage of the war was tilted to focus on civilian suffering in Gaza, Rabbi Richard Block, president of the Reform movement’s Central Conference of American Rabbis, urged his movement’s rabbis to stress the larger context of the conflict.

“Israel-themed sermons this year should help people understand what Israel is up against in its confrontation with Hamas — which is not about borders or settlements or who’s at fault for peace talk going nowhere, but about Israel’s very existence, which Hamas seeks to eradicate, and Jews everywhere, whom Hamas aspires to exterminate,” Rabbi Block told The Jewish Week in an email. “Rabbis have a tremendous opportunity and responsibility to sermonize about the ‘other Israel,’ the vibrant democracy whose culture of compassion and innovation is contributing so much to the world.”

But underscoring the complexity of the issue, Rabbi Block, in a sermon this spring to his Central Conference colleagues, said: “Israel needs many things, but one thing it does not need is more public criticism, which is ubiquitous. Some of it is legitimate, but it lacks context. Much of it is exaggerated, unfair, uninformed or plainly wrong.

“I am not suggesting that we pretend Israel is perfect, ignore the complex moral challenges it faces, disregard its occasional failures or excesses in the exercise of power or encourage unquestioning approval of whatever its government does,” the rabbi continued. “We have precious few opportunities to address our entire congregation or community on matters of paramount concern. To me, it feels unconsciously self-indulgent to squander them criticizing Israel, even when it may be deserved.”

Beth Simchat Torah’s Rabbi Kleinbaum might not agree. She too will be talking about Israel during the Days of Repentance, but in the days leading up to the start of the Jewish New Year, she said she wasn’t sure exactly what her message will be. If she has criticisms to make of Israel, they will be in her sermons, she said. Asked if her congregants’ criticism will have a chilling effect on her, she said, “No. Absolutely no.”

Of the more than a dozen rabbis contacted by The Jewish Week, only Rabbi Appelbaum of the Greenpoint Congregation said he would be steering clear of Israel in his holiday sermons.

“It’s hard to talk about Israel without bumping into politics — it’s dangerous territory … a minefield … a trap,” he said, one that would almost certainly offend someone on the left or right.

How, the rabbi asked, would a discussion of Israel “help people’s lives?” — how will it direct them to thoughts of repentance, the holy period’s theological emphasis?

But for others, a High Holy Days message about Israel will be unavoidable, whether it has this summer’s war in the foreground or the background.

Rabbi Scott Bolton of Congregation Or Zarua on the Upper East Side will talk about the “family” bonds between Israel and American Jewry. Rabbi Mark Kaiserman of the Reform Temple of Forest Hills will “stress how Israel is our Jewish home.” Rabbi Melvin Sirner of the Beth El Synagogue Center in New Rochelle will offer “a strong defense of Israel with an acknowledgement of other’s [Palestinians’] losses.”

On Rosh HaShanah, said Rabbi Joshua Strom of Temple Shaaray Tefila on the Upper East side, he will discuss “Israel and the situation there — but also ISIS [Muslim fanatics in Syria], Ferguson [racial tension in Missouri], the rise of anti-Semitism … the passing of Robin Williams, etc.” On Yom Kippur: “I plan to speak about the inability to speak to each other about things we disagree on,” Rabbi Strom said. “This will especially focus on both people’s reactions to the conflict in Gaza and Israel, especially in social media, but also American politics.”

Rabbi David-Seth Kirshner, spiritual leader of Temple Emanu-El in Closter, N.J., and president of the New York Board of Rabbis, said he advises his colleagues, particularly those who normally have reservations about Israeli policies and actions, to choose their words carefully this year.

“It’s impossible to have love without tochecha [rebuke],” he said — tochecha within ahava [love].