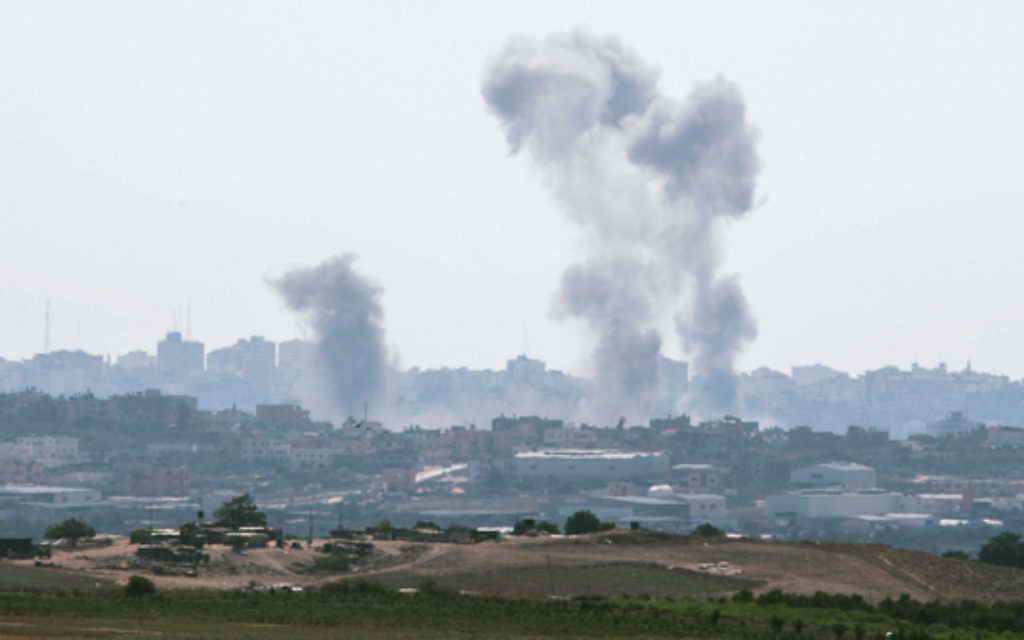 As Israel launched a fierce retaliatory assault on Hamas targets in the Gaza Strip this week, a sharp debate has erupted in Israel about the goal of the air and sea attack.

“We are sending a message that it is not worthwhile to attack us and, if they do, Hamas will pay a severe price,” said Peter Lerner, a spokesman for the Israel Defense Forces.

But much of the Israeli public is said to be fed up with the rocket attacks from Gaza that have triggered air raid sirens throughout the country — including in Tel Aviv and Jerusalem — and Hamas’ claim that all of Israel is a “legitimate target.”

It is said that Israelis would welcome an all-out assault to wipe out Hamas. And at least one retired Israeli general, Ephraim Sneh, a former deputy defense minister, agrees, saying the time is ripe for Israel to launch an attack in Gaza “to destroy this base of terrorism.”

In the last three weeks, more than 300 rockets from Gaza have been fired at Israeli cities and towns in southern Israel. There were no deaths or serious injuries.

In a conference call with reporters Tuesday organized by the Israel Project, Lerner pointed out that Israel’s promise to Hamas last week that “calm would be met by calm” went unheeded.

“Since Thursday we have seen a huge escalation of activities and a barrage of rockets that Hamas took responsibility for,” Lerner said. “In 24 hours, 130 rockets were fired and the government decided yesterday to embark on Operation Protective Edge. Since last night, Israel attacked 140 terrorist sites — rocket launchers, concealed rocket launchers, militants and where they hide out, command and control operations. Our activities are intelligence based and precise to limit civilian casualties.”

But within the first 24 hours, Palestinian deaths were said to be in the double digits. Among those killed was a family of seven whose home was destroyed. They reportedly did not leave their house after receiving a phone call from Israeli forces telling them it was targeted for attack.

Regarding a possible ground attack, Lerner said 40,000 reservists were called up Tuesday, but he stressed, “We don’t want to go there, but we need the flexibility to launch and mobilize if that is required.”

The reservists were called as part of the “poker game” Israel was playing with Hamas, according to Gerald Steinberg, a political science professor at Bar-Ilan University.

“It could take a few days to call them all up and that gives time for the threat to work,” he said. “There will be a gradual escalation on the part of Israel in order to say to Hamas, ‘We are serious.’”

“It looks like Israel’s security cabinet has agreed on a cautious strategy for all of the right reasons,” Steinberg added. “Nobody wants to go back in and occupy Gaza for any period of time.”

And despite calls from some Israeli leaders for a ground assault — most notably Foreign Minister Avigdor Lieberman — Steinberg said Israeli Prime Minister Benjamin Netanyahu “has gained a lot of stature for carefully managing this crisis, so far.”

Lieberman said he was so upset with this and other disagreements with Netanyahu that on Monday he dissolved the partnership his Yisrael Beiteinu Party formed with Netanyahu’s Likud Party in advance of the last election. But he said his party would not withdraw from the coalition government, and he continues to serve as foreign minister.

Sneh, the former deputy defense minister, told The Jewish Week that Netanyahu’s government is working from the wrong playbook and not being sufficiently aggressive.

“Israel is exerting all this military pressure on Hamas to simply achieve a new cease-fire, which means acceptance of the fact that one mile from Sderot and three miles from Ashkelon is a base of terror that will remain in existence,” he said.

Sneh said it would take “weeks” to destroy the terrorist bases in Gaza and that Israel should then “give the United Nations and the Arab League the key and say, ‘You decide to whom to hand the keys.’ They could then give it to [Palestinian President Mahmoud] Abbas or establish a protectorate or a non-political civil administration.”

Israelis are also reportedly prepared for a major Israeli assault on the Gaza strip. One Israeli reporter in Tel Aviv said that after Israel’s Iron Dome defense system shot down a long-range Iranian missile headed for the heart of the city Tuesday, residents interviewed said they supported a major Israeli offensive against Hamas.

Yoram Meital, chairman of the Herzog Center for Middle East Studies at Ben-Gurion University in the Negev, said such sentiment is commonplace in Israel.

“I think the current Israeli government is very much a victim of its own rhetoric,” he said. “During the last two years they marketed to the public in Israel and the international community a bold, nationalistic message. Now the public in Israel is demanding that the leadership deliver the goods. So the pressure is on Netanyahu today — and not only from right-wing parties in the Knesset and in his own government — but also from the public at large. The atmosphere in Israel today is very much like, ‘Go into Gaza, use your full force with hammer in hand and dismantle Hamas — stamp out this threat’ … especially after the killing of the three yeshiva boys.”

He was referring to the abduction and killing of three Israeli teenagers — Naftali Fraenkel, Gilad Shaar and Eyal Yifrah — while they were hitchhiking June 12 in the West Bank. Their bodies were found 18 days later and Israel blamed Hamas terrorists for the kidnapping, although no one had been arrested by the beginning of this week.

A Palestinian teenager, Mohammed Abu Khdeir, was abducted in East Jerusalem and burned to death last week in what Israeli authorities said was a revenge killing carried out by six Israeli youths who were arrested days later.

It was Israel’s response to the abduction of the Israeli teens that triggered the rocket attacks from Gaza, according to Avraham Sela, an associate professor of international relations at the Hebrew University of Jerusalem.

“Following the abduction of the teenagers, Israel broke the rules of the game and arrested hundreds of those [Hamas members] who had been released in the Gilad Shalit [prisoner swap] deal,” he said, referring to the 1,027 Palestinian prisoners freed in 2011 for the return of Shalit. Shalit is an Israeli soldier who had been abducted in 2006 by Palestinian terrorists who held him in the Gaza Strip for five years.

“Remember, for Hamas this [prisoner release] was its biggest achievement in the last few years and by bringing hundreds of those men back to prison, it put Hamas in an uneasy situation,” Sela said.

He observed that Israel “took advantage of the abduction [of the Israeli teens] to hit Hamas in a way that had nothing to do with the abduction. It is very clear that this was an opportunity to further weaken Hamas in the West Bank.”

“In my view, this is the most significant reason why Hamas became so much involved,” he added.

Other experts have suggested that Hamas made a calculated decision to provoke an attack from Israel that would cause civilian casualties in Gaza. The logic is that this would evoke empathy in and enhance the status of Hamas in the eyes of the Arab world, and perhaps beyond.

Hamas has been weakened of late by reduced support from Iran and the closing of the tunnels by Egypt that had been used to smuggle arms and goods. This financial crisis, it is believed, convinced Hamas to join a unity government with the Palestinian Authority.

Asked about Palestinian President Mahmoud Abbas — whose Fatah Party joined with Hamas in a unity government earlier this year — Sela said he is “sure he did not worry about” Israel’s crackdown on Hamas in the West Bank.

“He wants to see Hamas weaker,” he said.

But Sela said a major Israeli military operation against Hamas in the Gaza Strip would hurt Abbas, who is supposed to represent all of the Palestinian people.

Meital said he believes that no matter what Israeli forces do in the Gaza Strip, the idea that they can destroy the terrorist infrastructure there is a “goal that cannot be achieved. … It’s very dangerous and very simplistic.”

“My reading is that the security establishment – first and foremost the IDF but also the intelligence apparatus – advised the government not to rush into a land campaign unless they don’t have any other choice,” he said. “Use the air force, artillery and other methods, but don’t send troops into the Gaza Strip. If you do send them in … they do not launch a massive, comprehensive campaign. A majority in the cabinet has taken that advice and that is why they are taking very limited steps in terms of preparing the army for a major land operation within Gaza.”

Barring a terrorist missile striking a kindergarten or a school, Meital said he believes the current situation “could go on for days” with only a limited escalation.

Retired Israeli general Shlomo Brom, who is now a senior research fellow at Israel’s Institute for National Security Studies, said he is convinced that Israel “does not wish an escalation” of the conflict in the Gaza Strip.

Sela said he believes other terror groups in the Gaza Strip “egged” Hamas into this battle.