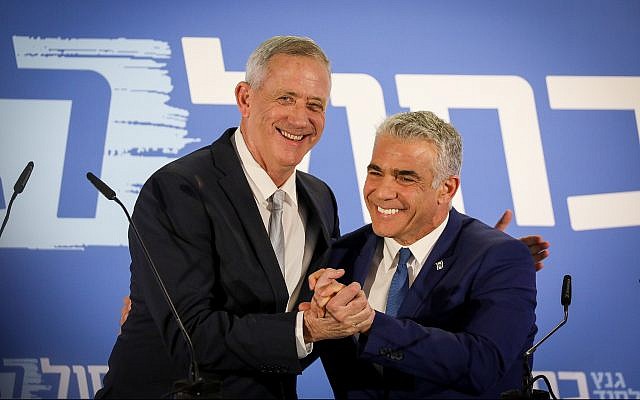 Benny Gantz and Yair Lapid of the newly formed Blue and White party give a joint a statement to the press in Tel Aviv on February 21, 2019. (Noam Revkin Fenton/Flash90/via Times of Israel)

“Today we are changing the face of Israel,” Gantz said in a speech carried live on national television.

“In the past decade something has gone wrong,” he said. “Israel has lost its way. The government has incited division [in Israeli society], it’s a government that divides and rules. We’re here to say, ‘enough.’ Instead of division, we want unity. Instead of extremism, we want dignity. Instead of fraction, we propose national reconciliation.”

Gantz added that he and those on stage with him, Lapid and senior partners Moshe Ya’alon and Gabi Ashkenazi, “each have an ego. We each have an agenda. But when we saw the country that is so dear to us being torn apart, we put our egos aside…none of us are above the people or above the country. 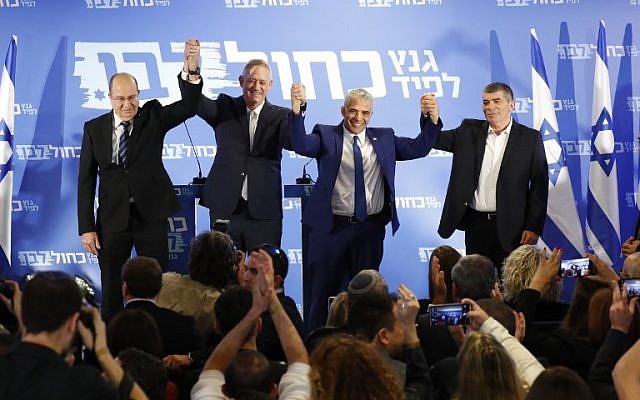 Lapid said: “We are creating a ruling party. The Israeli public will go to the polls on the 9th of April to choose what kind of country they want, what sort of country their children will live in: a country of investigations, corruption and incitement or a country of hope, resilience and a promise for the future. Netanyahu chose [racist rabbi Meir] Kahane’s people as his partners. We choose each other, and more than that, we choose the citizens of Israel.

“I wouldn’t be standing here today if I didn’t believe that Benny Gantz could lead us to victory and then lead the country. He’ll be an excellent Prime Minister. I believe in him.”

Gantz revealed he shares some poignant family history with his new political partner.

“I learned in recent days that 75 years ago Yair Lapid’s father, Tommy, and my mother Malka lived in a shared apartment building in the Jewish ghetto in Budapest,” Gantz said at the press event. “And here the son of Tommy and the son of Malka stand before you on one stage.” 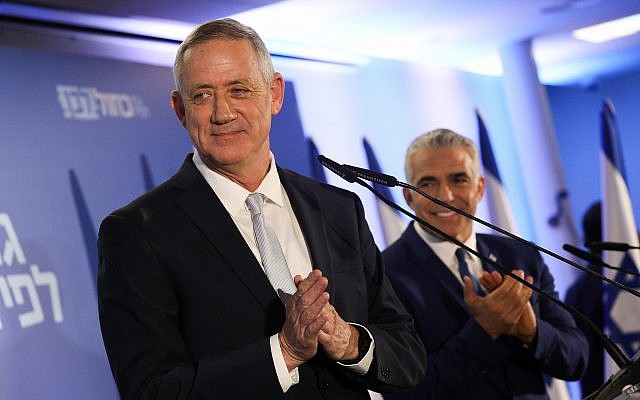 Both stressed the party was about inclusiveness. “Our doors are open to all: right-wingers, centrists, left-wingers…our hands are outreached to all Israelis: Mizrahi and Ashkenazi, religious and secular, Jews and non-Jews,” Gantz said.

Said Lapid: “We are here with a proposal for the Israeli public: To be together. To stand united against incitement and division. To take us back to the values of unity and shared goals.”

In an overture to the ultra-Orthodox community, whose leaders have vowed to shun Lapid for his perceived actions against them, Gantz said, “We view the haredi community as an inseparable part of Israeli society and we aim to cooperate with it on the basis of mutual respect.”

Ya’alon, a former IDF chief and ex-defense minister under Netanyahu, praised the new alliance, saying, “every Israeli should welcome the hope-filled coming together of all these forces in the effort to put the country back on track.” 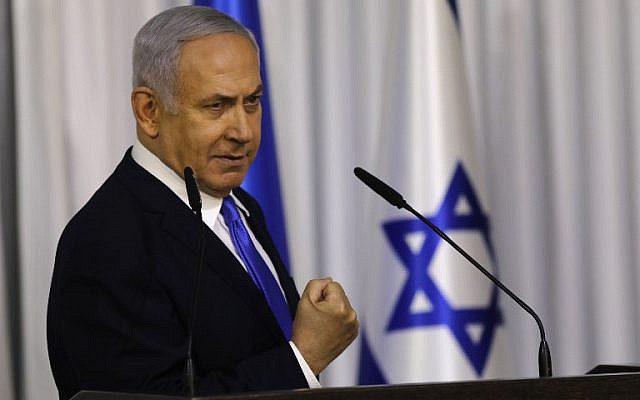 Prime Minister Benjamin Netanyahu gives a televised statement after a meeting of his ruling Likud party in Ramat Gan on February 21, 2019. (Menahem Kahana/AFP/via Times of Israel)

Ya’alon lashed Netanyahu for his push to get racist Kahanists into the Knesset.

“I was ashamed yesterday when I found out about the special effort Netanyahu was making to bring Kahanists into the Knesset,” he said. “He’s willing to erase the important and historic decision that former prime minister Yitzhak Shamir of Likud made to declare them illegal.”

Fellow former chief of staff and Blue and White number four Gabi Ashkenazi, who has rarely been heard in public since leaving the army in 2011, said in his first political speech that he had come forward “out of a sense of purpose, for my father and mother who made aliya to this country, dreamed, saw their dreams fulfilled and built a home steeped in Zionism.”

He said he believed “we have a winning team.”

Shortly before the press conference, Ashkenazi purportedly told fellow faction members that President Reuven Rivlin would prefer their party to Likud when deciding who will form the next coalition after the elections, Channel 12 news reported.

“I hope this train stops at the President’s Residence. I can only guess who the president wants to see there,” Ashkenazi reportedly said at the party’s first faction meeting in Tel Aviv.

Rivlin’s office issued a rebuke to the reported statements, saying the president would only make a decision on who he will ask to form the next government based on “the results of the election and following consultations [with the parties], as every single president has done through the years.”

Gantz and Lapid’s comments came hours after an early-morning announcement that the parties would merge their lists in order to boost their bid to replace Likud. The merger deal includes a rotation at the top between Gantz and Lapid.

The new alliance drew criticism from the right on Thursday.

“It’s not clear what they are,” said New Right party co-chair Justice Minister Ayelet Shaked. “For a Palestinian state or against? For the nation-state law or against?”

As part of the merger, Yesh Atid candidates fill 13 of the first 30 slots, Israel Resilience gets 12, and Moshe Ya’alon’s Telem party, which merged with Israel Resilience last month, has four slots. Ex-IDF chief of staff Gabi Ashkenazi, who joined the party Wednesday night, is in the fourth spot on the list. (Full list below.)

The first four first spots on the list are: Gantz, Lapid, Ya’alon and Ashkenazi. Of that quartet, only Lapid is not a former head of the army.

In fifth place is Avi Nissenkorn, the head of the Histadrut labor federation, followed by Yesh Atid MK Meir Cohen.

The top-ranked woman is former news anchor Miki Haimovich in the seventh spot, followed in 10th by Orna Barbivai, who was the Israeli military’s first female major general. Six other women were placed in the top thirty. 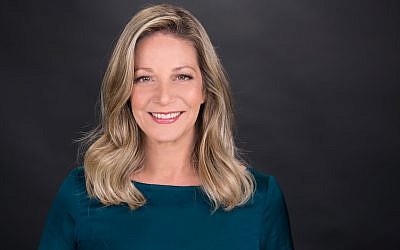 It was not clear from reports if Ya’alon would then be appointed foreign minister or receive another role.

The Ynet news site reported that the deal also includes a promise by Gantz that the joint faction will not join a government led by Prime Minister Benjamin Netanyahu if the attorney general announces he intends to indict the premier in any of three corruption cases — even if no pre-indictment hearings have yet been held. 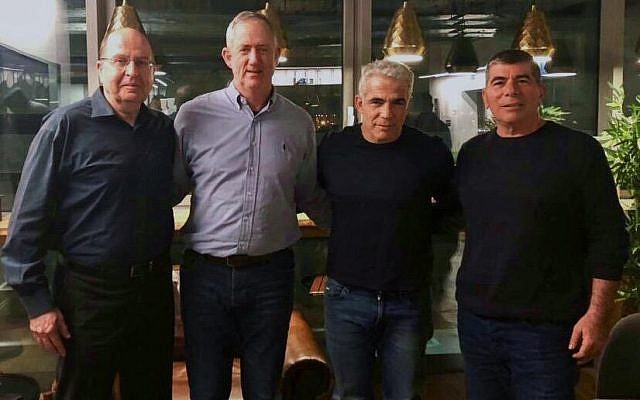 Attorney General Avichai Mandelblit is expected to announce in the coming weeks whether he plans to charge Netanyahu, who has denied wrongdoing and vowed not to step down even if indicted.

The announcement of the merger came just before dawn and led to calls during the day from both the right and the left for other alliances ahead of the 10 p.m. deadline when parties must submit their final lists of candidates to the Central Elections Committee.

The list of Blue and White faction’s top 30 candidates for Knesset elections on April 9, 2019: