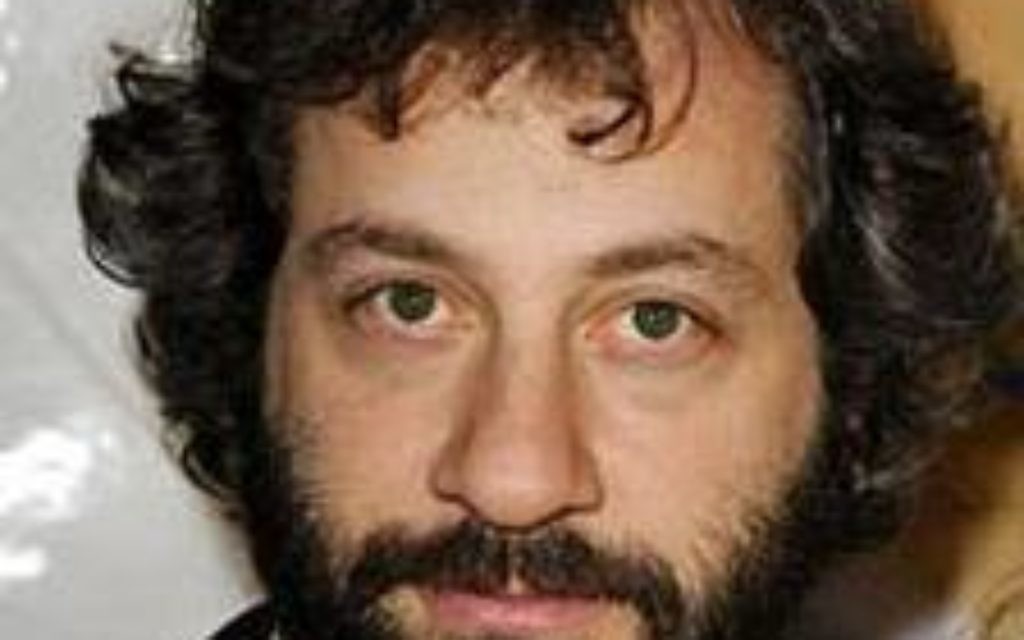 In watching and enjoying the oeuvre of Jewish Hollywood juggernaut Judd Apatow — the "40-Year-Old-Virgin," "Knocked Up," "Bridesmaids" — I have noticed that the romantic connection of a Jewish man to a woman who isn’t Jewish is a kind of recurring motif. Sometimes it’s implicit; sometimes it’s mined for its comic value.

The latter is the case in "The Five-Year Engagement," which recently opened, and contains a scene in which hero Jason Segel’s folks insist that at the ceremony all of the men will wear yarmulkes. Segel’s fiancée, Emily Blunt, finds it odd that he is open to this idea, since, she says, lowering her voice to be heard all the better, he has never said the word “yarmulke” to her before.

I will totally give Apatow the inherent funniness of “yarmulke." You do, too. Admit it. But Apatow’s interest in depicting the phenomenon of Jewish men marrying “out” – as he himself has, to this sharp comedienne – strikes me as awfully old-fashioned.

Sure, Barry Levinson’s "Liberty Heights" explored the lust of the Adam Brody character for a gorgeous, preppy blonde. That movie was set in 1954.Today, around half of Jews marry folks who aren’t Jewish, as but we still have this guy saying things like “shiksa goddess.”

Of course, you could argue – and many readers of this newspaper might – that the very frequency of intermarriage makes it a problem, and all the more noteworthy. I would argue that it isn’t a problem, although it can sometimes be a challenge in the sense that it’s the rare Jewish organization that sees intermarried families as a source of growth and inspiration.

But some amazing work is being done along these lines, as you know if you read my colleague Julie Wiener’s coverage of these issues and her In the Mix blog. Most inspiring, I feel, is the fact that oftentimes it’s congregants who weren’t born Jewish who are energizing their families, their communities and even the broader Jewish world. A prime example: Dru Greenwood, who directs Synergy, the New York Federation’s initiative to strengthen synagogues. I think of her as a modern-day Ruth.

The problem, of course, is that Apatow seems unaware or indifferent to the notion — at least on film — that one can marry someone who isn’t Jewish and still embrace Judaism.

Because in the end, the yarmulke scene is a big buzz kill. The Jason Segel character insists that he has said the word before, says it all the time in fact, and when Emily Blunt says, “Babe, you don’t have a yarmulke,” he gives up the ghost. Sure I do, he feints, gesturing vaguely. “It’s in my … Jewish drawer.”

Now that is sad. And babe, it really doesn’t have to be that way.