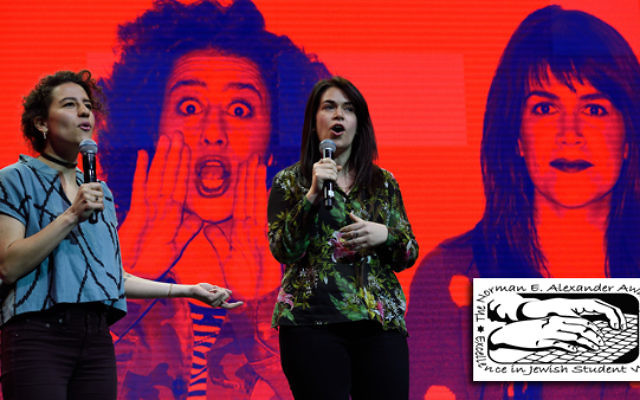 Editor’s Note: Sammy Stolzenbach was a finalist The Norman E. Alexander Award for Excellence in Jewish Student Writing. The national contest sought essays on a Jewish American who has made a significant impact in the field of television, film, music or theater. Writers were asked to identify the person’s lasting legacy on them or on American culture. The contest was sponsored by the Jewish-American Hall of Fame and The Jewish Week Media Group.

Growing up in a tight-knit, supportive Jewish community, I seldom felt like part of an endangered minority. Despite constant reminders and awareness of the plight of the Jewish people — increasing rates of conversion, conflicts in Israel and the general threat of anti-Semitism — my life as a Jew has been a comfortable one. But the blessing of a secure community has always come with a catch; an ominous warning whispered by adults that the “real world” would not be the same.

As my time to leave the community for college draws close, I’ve felt as if I was being prepared for battle. Years of sitting through advocacy seminars and guest speeches on anti-Semitism on college campuses have made it abundantly clear that our weapon of choice should be knowledge. We can shield ourselves with facts; we can pierce the fallacies thrown at us with statistics. Objective truth will be our Iron Dome.

Yet between all these preparations is when a new answer appeared to me across the television screen. On the Comedy Central show “Broad City,” two young, Jewish women, Ilana Glazer and Abbi Jacobson, are making it in the “real world” all the while defying the rules I had been prescribed to make it myself. Their characters retained their real names and their real faith, yet they never looked on guard or prepared for battle. The bustling streets of New York did not make them cringe in the spotlight — it made their smiles brighter. They never stopped to peek around the corner to check for anti-Semitism creeping up from the shadows of a dark alley. And all the while, you could catch Abbi wearing a shirt reading “Challah Back,” or Ilana leading her non-Jewish friends towards her mother’s house to sit shiva.

“Broad City” has taught me that while preparing for the worst and stocking up on knowledge is useful to defend yourself as a Jew, a much more effective weapon is available, and with it the possibility to disregard fear. Ilana and Abbi show that pride keeps their Jewish identity intact. But more importantly, the subtle nature of their pride proves that the best defense in war is to eradicate any desire for the war itself. Being Jewish is a non-issue to both the characters, and in turn, it is a non-issue to anyone else around them. Explicit mentions of their shared religion are interwoven with humorous dialogue about drugs and sexuality, and Judaism itself is never safe from being the butt of the joke. Judaism is simply one constituent of each girl’s identity, an equally integral part of a whole human being that deserves no special defense or overrepresentation.

My mom used to tell me that the best way to get my siblings to stop chasing me was to stop running. Ilana and Abbi prove this lesson to be true, and give me hope that I can leave my community without fear and enter the “real world” full of pride.