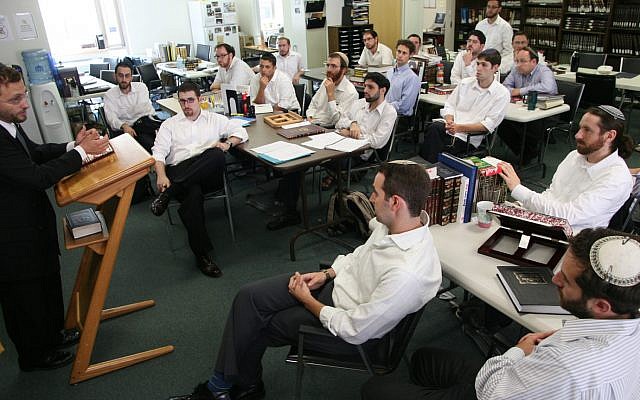 (JTA) — A fundraiser on behalf of Daniel Atwood, the gay rabbinical student who was denied ordination at a liberal Orthodox rabbinical seminary, has raised more than $8,000 within a day of its launch.

Atwood was denied ordination at Yeshivat Chovevei Torah, a liberal Orthodox rabbinical seminary in New York City. The school knew of his sexual orientation for much of his time there and came to the decision recently, months ahead of his expected completion of the program.

Rabbi Dov Linzer, the school’s president, told the Jewish Telegraphic Agency that the decision was due to something that happened roughly six months ago, but would not specify what. However, in October, Atwood and his partner got engaged on the stage of a concert in New York City.

Linzer said the process of denying Atwood ordination “was not handled well.” JTA has reached out to Atwood.

“He came out to us in the end of his first year and we were fully prepared to give him semicha until certain circumstances arose over a few months ago,” Linzer told the JTA, using the Hebrew term for rabbinic ordination. “Because this is such a sensitive issue it took us a few months to come to the decision that I came to. I was trying to figure out if there was a possible way forward. I came to the conclusin there was not.”

A fundraiser by Jewish Queer Youth, a Jewish LGBTQ group, sought to raise $5,000 so that Atwood can travel to Israel and receive ordination there. It was launched Thursday afternoon and had surpassed its goal by the end of the day.

“Daniel deserves a Semikha celebration, like the rest of his YCT classmates, to which he can invite his family and friends,” read the description of the fundraiser on Facebook. “Funds raised in this campaign will help pay for a dignified Semikha ceremony that reflects Daniel’s hard work, dedication, and commitment to our community.”

“I think we have the most amazing community of people who are just so supportive of each other,” said Rachael Fried, JQY’s deputy executive director. “We have this unconditional love from this chosen family, and even if people don’t know Daniel, there is this support system we have in this Jewish queer community that is unlike any I’ve seen anywhere else.”

In a statement earlier this week, Atwood wrote that he was committed to working with the school to receive ordination.

“I was always willing to navigate those challenges and work with YCT throughout this process,” he wrote. “And I have always been fully committed to living my life according to Orthodox halacha [Jewish law]. At the same time, I refuse to live anything but a dignified life, something I was always transparent about, including not being closeted or secret about my Torah, my identity, my beliefs, or my relationship.”