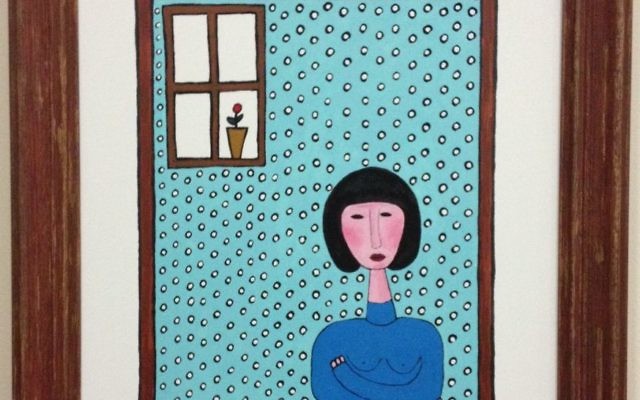 At a close look, what appears to be a tear on the cheek of one of Sara Erenthal’s painted portraits is actually a hole in the wooden board the piece is painted on. The painting is one in a series called “Out of the Drawer” — the boards were pulled from a drawer she found on the street.

The brightly colored painting is a representation of a girl with two tight braids. This, like much of Erenthal’s work is autobiographical, recalling a childhood in which she always wore her hair that way. Her father usually braided it, insisting that she wear them until she was 10 when she began wearing one braid down her back instead, as in a companion painting. As her story unfolds in a recent interview, the tear seems as though it was meant to be there.

Erenthal’s family was Neturei Karta, ardent ultra-Orthodox anti-Zionists. At age 17, she ran away, rather than face an arranged marriage. She never returned. She’s now a 32-year-old artist in New York City and is zealous about making art.

Several other paintings, including the “Out of the Drawer” series, are on view in the Manhattan offices of Footsteps, an organization that assists fervently Orthodox men and women interested in exploring life in the secular world. Her painting, “Undecided,” which appears on the invitation and cover of the exhibition catalog, has been sold. In addition, a new series of paintings called “A Window Into My Life,” iare on view in Bushwick, Brooklyn.

Erenthal, who is entirely self-taught, works with acrylics on canvas and often on found objects; she also uses coffee to color her work, and has created pieces with cut paper and safety pins. She did a series of work using the fringes of tzitzit along with black leather straps once part of a pair of tefillin (given to her by a friend who found them). About a year ago, she started painting on canvas, and before that did a lot of drawing, doodling and assemblages.

Her work is self-reflective, bold, inventive and lately in bright colors. She’s spontaneous; many paintings are started and completed quickly. When asked to describe her style she says, “I just work, I don’t think I have a style. It’s explorative.” She adds, “There’s so much going on within me when I paint.”

When we meet at the Footsteps office, she’s dressed in a short polka-dot sundress with work boots, and her short dark hair is tinted teal blue. One of the first things she did when she ran away from home was to cut off her braid. She still has some of the turquoise paint in her new work on her arm, where she also has words penned in henna, including, “Life is art. My body is my diary.”

Erenthal was born in the Mea Shearim section of Jerusalem. The family moved to New York when she was 4; they lived in Borough Park, Monsey, Kiryas Joel and, for a year, France. As she explains, they didn’t quite fit in anywhere, so they moved a lot. When she was 17 her parents returned to Israel, and she joined them a few months later after finishing Beikvei Hatzon School for Girls in Williamsburg. When her parents tried to introduce her to a potential husband, she ran away the night before she was to meet him.

She tried to enlist in the Israel Defense Forces, even though she spoke no Hebrew. The person who was translating for her became a friend, introducing her to people who helped her and found her an apartment on Kibbutz Palmachim. She inspired headlines in Israel about the first Neturei Karta soldier, and her father sat shiva for her. Now, her parents are divorced and she is not in touch with them. Her siblings remain religious.

“Since I can remember,” she says, “I always felt like I was born into the wrong place, the wrong family. I always knew I wanted to be different. I wasn’t sure I could do it. It was my dream.”

Frequently, she thought about running away, but didn’t think it was possible.

“If you leave, you have to give up so much: your family, your community. It’s really scary; you’re born again. But you’re not a baby, and no one is taking care of you.”

Asked what she misses, she says, “Kugel, food. A sense of community is nice. Other than that, I don’t miss anything. Nothing about that part of my life was good.”

Upon completing her army service, she came to New York and worked in various jobs. Although she dreamed about painting, she mostly focused on trying to fit into the secular world. After nine years, she went to Israel for a month. When she met with the old friend, an artist, who had helped her leave home, he encouraged her to go to India. She spent 10 months there, the last five in the Pravati Valley, which she found breathtaking.

“There’s no way you can be there and not want to create,” she says. Daily, she would grab her sketchbook upon waking up. Recalling those days, she signs her paintings in Sanskrit.

Now Erenthal works wherever she can, sometimes in friends’ studios or homes, sometimes in the Footsteps office, where they have helped pay for art supplies. She’ll spend this summer living and working in Crown Heights. The recipient of a fellowship from Footsteps, she’ll work as an apprentice to the Haitian artist Engels, and will be working on her own art in a studio in the home of a collector.

Lani Santo, executive director of Footsteps, which has served more than 750 individuals since its founding in 2003, says that the organization’s biannual art shows “bring the voices of our members’ experience to our walls.”

“I think that we see people who are out-of-the box thinkers. They are brought up in highly structured environments, emphasizing the collective over the individual. It takes a creative person to imagine a world beyond what they’re facing.”

Erenthal says, “I realize now that I have always been an artist. I didn’t know it when I was younger.”

While her parents were both involved with art — her mother is a painter and poet, her father a graphic designer — she was never encouraged to pursue it.

To support herself, Erenthal has worked with children in art workshops and taken on random jobs. Last summer, she worked as a drawing model at the Art Students League but was very uncomfortable. Lately, she has been selling hand-painted canvas bags on etsy.com, with some featuring the poised, enigmatic figures and fresh compositions of her new series.

I see a bit of Modigliani, an artist she admires, in her long-necked women.

“You have to understand,” Erenthal says, “I had no idea about art history until I started going to museums.” And she’s never been to certain museums that charge admission.

Erenthal may be best described as an outsider artist, referring to art created outside the boundaries of official culture.

Selig Sacks, a partner with the law firm Foley & Lardner, who has collected outsider art for more than 20 years, explains that outsider art encompasses many things. “It’s a very large category,” he says. “These artists are outside of the mainstream.

One unifying characteristic is that they are not academically trained as artists — they don’t come out of art schools, some have attended or graduated from Harvard or other universities but they didn’t study art as a discipline. They can be reclusive or very much part of their community, they take inspiration from the experience they observe or universes they have created from within.”

Erenthal does think about art school, if she could find the money, but admits, “I like where I’m going on my own. My process of learning comes with exploring myself. I don’t know if I would have the same sort of process in the classroom, whether I would be so free.”

Her dream as an artist: “I would love to do work that is accessible to the public, like street work and murals. I feel like part of my mission is sharing my story, not just with people who can buy a painting.”

“Un-Arranged,” an art exhibit by Sara Erenthal, which was part of last weekend’s Bushwick Open Studios, is on view for additional hours, Wednesday, June 5-Friday June 7, 2 p.m.-5:45 p.m.at Loom Yoga Studio, 1087 Flushing Ave., Brooklyn. Her work is also on view in “The Pursuit…: A Group Exhibit of Footsteps Artists,” though October 2013. Viewing by appointment only, for hours and address, contact info@footstepsorg.org