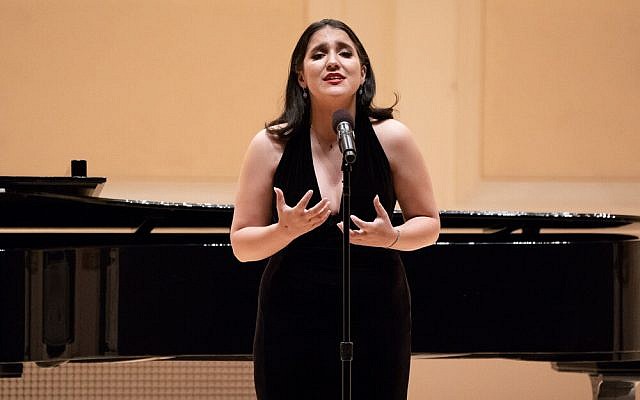 When I was younger, I never considered myself a singer. I attended weekly lessons in Shotokan at Karate Kids and would often crack open my art suitcase to doodle on colored construction paper with scented Mr. Sketch markers. It was not until my parents joined the congregation at Wilshire Boulevard Temple and enrolled me in religious school that I truly fell in love with the art of singing.

Every Sunday morning at religious school, in between Hebrew and Tanakh class, we would break from studying to sing Jewish music in the sanctuary at Irmas Campus. I did not know any of the melodies that they sang, but I frequently found myself tapping my foot to the sound of Robby’s guitar, the young cantor-in-training, and would often try to sing along with Rabbi Eshel. These sessions were always the highlight of my week; in the sanctuary, I never felt ashamed of the little Hebrew I knew, or how limited my knowledge of Torah was. The music moved me, and that was my first taste of not only music but also of Judaism and spirituality.

My love for sacred music grew when my older brother, Daniel, joined the temple youth choir, and we began to attend Shabbat services on Friday nights more regularly. At this point, I was very familiar with the music and would sing along confidently. One evening, as I was singing one of the verses of Lecha Dodi, a mother from the congregation turned to me and encouraged me to join the choir. Both my parents urged me to do so as well, and I soon enough, I joined. I had bad stage fright, but Cantor Gurney helped acquaint me with the experience of singing in front of other people and helped me learn the higher-level music. Under his guidance, my voice developed into a much larger, operatic instrument. It was soon time for me to begin my bat mitzvah training with the other cantor at our temple, Cantor Ettinger.

That year, I had auditioned for my first middle school show, and upon the release of the cast list, I was dismayed that I had been placed in the ensemble. When I questioned the decision, I was told that I could not sing and should give up my interest in performing arts. Disheartened, I nearly abandoned my love for singing; I didn’t think I had a chance. I confided in Cantor Ettinger, who refused to let me give up. He told me, “That’s not right. You’re not giving up. I’m going to send you to my vocal coach. He doesn’t take on kids, but I think he’ll take you on as an exception. I promise you, you’ll be a singer.” A week or so later, I started with my vocal coach, Joel, who I have now studied with for five years.

In these past couple of years, my studies in vocal repertoire and pedagogy have intensified. In 2018, I decided, after having studied a great deal of Broadway and opera repertoire with Joel, that I was ready to enter into a competition. After years filled with self-doubt, I was worried about my submission, and convinced myself, much like the times before, that it was not going to happen for me. However, early on a Sunday morning in February, as I was leaving my Los Angeles Museum of the Holocaust Teen Board meeting, I received an email notifying me that I had won the international competition for musicians and would be performing in Stern Auditorium at Carnegie Hall on June 6th. The email left me in shock, but that surprise soon transformed into high-pitched squeals of utter joy.

That summer, I did indeed perform solo at Carnegie Hall. During the sound check preceding the performance, I walked onto the stage with my pianist and stood gazing at the magnificent layers of gold-rimmed, plush red seats that seemed to go on forever. As I, a dainty, 16-year-old girl, stood on that large, shiny stage, I realized that music was my calling. It was not the recognition that came with winning the competition that brought me to this realization. It was not even my deep love for the repertoire. It was the feeling that I could bring something meaningful into the world. Standing in that huge auditorium, listening to my voice bounce off of the walls, I realized that I had power. My voice mattered. I believed that the music I created could be more than just a creative outlet but could be a soundtrack for someone else’s life.

That night, as I sang my song, “When I Look At You,” I looked into the audience. It was a sea of people who I knew nothing about, and who knew nothing about me. Nerves bubbled up and sat in my throat, but as I started to sing, I saw wide, beautiful smiles appear on people’s faces, and I realized that the song that meant so much to me could also mean something to other people who had no connection to me or my journey.

On that ornate stage, as I looked out at the smiling strangers and my proud parents and brother, I thought of the little girl who had stage fright. I thought of all the times I had sat with my community in the Wilshire Boulevard Temple sanctuaries and listened to the young women from the choir sing Jewish music. They felt every word of the music they sang, and I felt it too. It was those women, the cantors, my vocal coach and my family who showed me just how powerful singing could be. Listening to someone sing or perform can be transformative because every song is a story waiting to be unraveled. I no longer sing just to express myself. I sing because one day, I hope to be part of someone else’s journey, and have as much impact on someone as my cantors and vocal coach did on me.