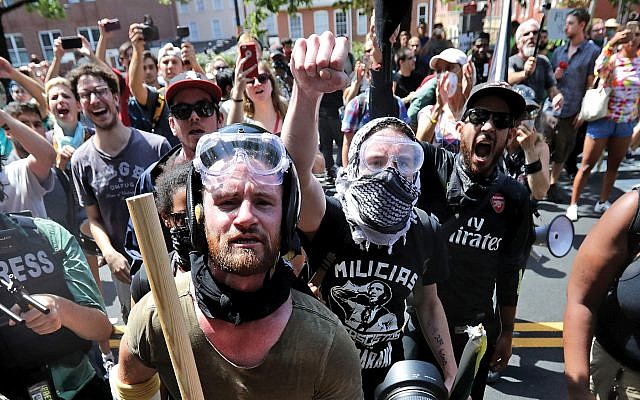 The scene in August 2017 as neo-Nazis and white nationalists marched in Charlottesville, Va. Getty Images

The Anti-Defamation League is hailing the Dec. 8 conviction and last week’s sentencing of James Alex Fields, Jr., the 21-year-old white supremacist tried in the death of Heather Heyer in Charlottesville, Va., more than a year ago. The Virginia jury sentenced Fields to life in prison for the murder of Heyer, who was 32 when Fields rammed his car into a group of counterprotesters at the “Unite the Right” rally Aug. 12, 2017.

But the case isn’t the only legal action filed against white supremacists and neo-Nazis involved in the rally, which was nominally organized to protest the removal of Charlottesville’s statue of Confederate Gen. Robert E. Lee. Fields and 24 other defendants face the possibility of heavy punitive and compensatory damages as the result of a lawsuit filed by Roberta Kaplan, the New York attorney who famously won the landmark Supreme Court case that ordered federal recognition of same-sex marriage, and Karen Dunn, a Washington attorney and former federal prosecutor. A third lawyer involved in the case is Alan Levine, who had worked with Kaplan in the past and is also the board chair of the Jewish Theological Seminary of America, the Conservative movement’s seminary.

Described as the broadest lawsuit to date against white supremacists, the lawsuit is aimed at individuals and organizations that organized and led the Aug. 11-12 protest. In addition to Fields, individuals named in the suit include such well-known white nationalists as Jason Kessler, Richard Spencer and Matthew Heimbach, along with hate groups like Identity Evropa and the League of the South. The plaintiffs are 10 members of the Charlottesville community, including two women whose legs were crushed by Fields’ car; Melissa Blair, a paralegal whose life was saved when her then-fiancé and now husband, Marcus Martin, pushed her out of the car’s path; Martin, who, like Blair, suffered physical and emotional injuries; University of Virginia students; and members of the area’s faith community. 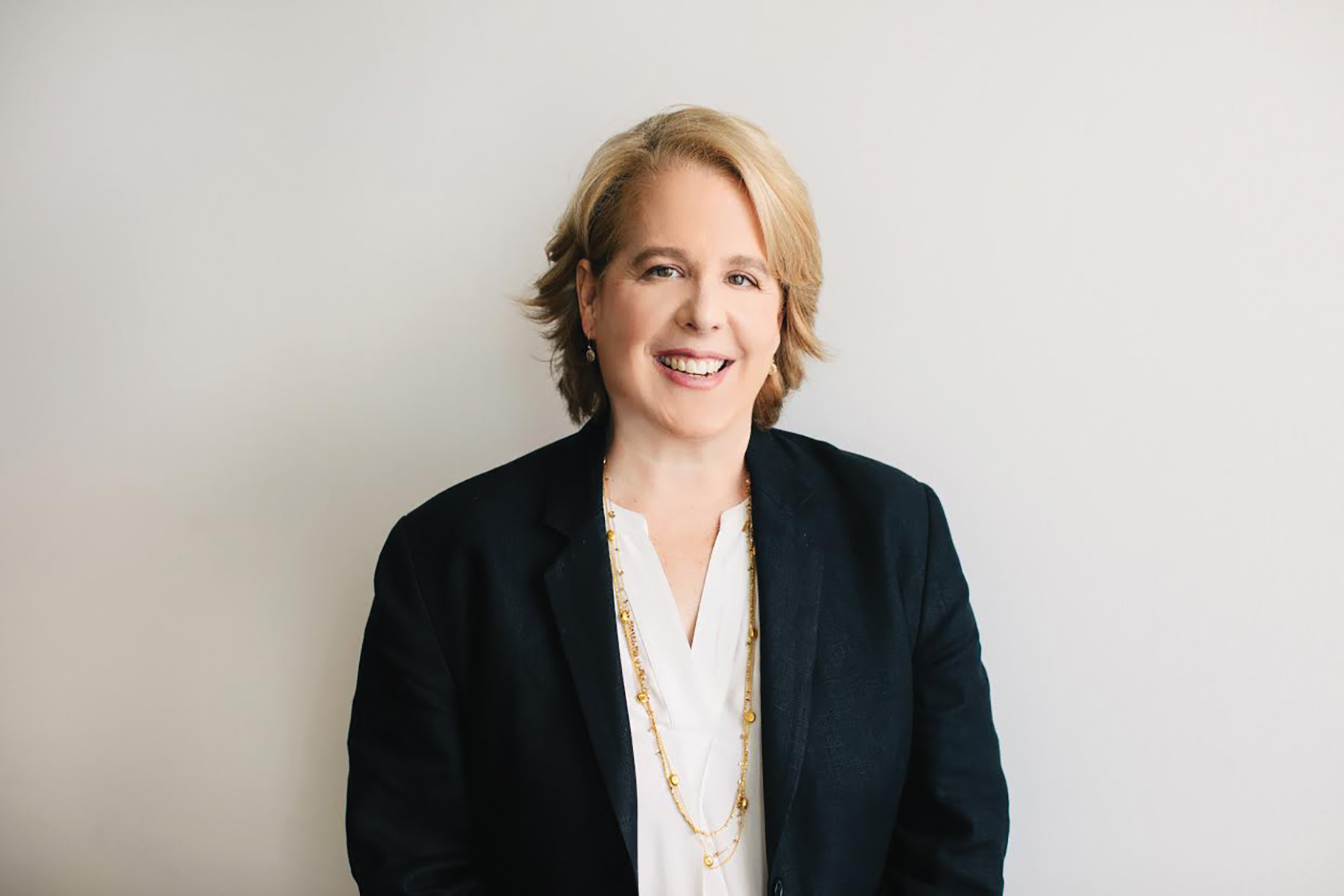 In preparing her case, Roberta Kaplan reached back to two Reconstruction era laws created to fight the Ku Klux Klan’s reign of terror in the South. Kaplanhecker.com

The lawsuit contends that the violence in Charlottesville was “planned, plotted and premeditated,” Dunn told a roomful of listeners recently at New York’s Museum of Jewish Heritage-A Living Memorial to the Holocaust. “We’ve put together a case that’s very large in scope for a communal or a civil case, and the reason we’ve done that is because we want to explain how these people coordinated and worked together in order to create these very non-spontaneous events that happened and did harm to real people in Charlottesville.”

Appearing at the same gathering, Kaplan said researchers preparing the lawsuit have unearthed an extensive record of communications among the defendants on a secret internet discussion board known as Discord in which they discussed, promoted and encouraged precisely what they would do in Charlottesville. Different chatrooms addressed different subjects, she said, with some of the defendants even discussing the logistics and legal ramifications of plowing into groups of protesters with a car.

One example is a discussion found by researchers focusing on whether it was illegal under North Carolina law or Virginia law to do what Fields eventually did and which type of car would be most effective, Kaplan said. The complaint, she added, even includes a picture of a John Deere harvester posted in one of the chat rooms and retitled “the John Deere multi-lane protester digester.”

In preparing their case, the lawyers are relying on two statutes dating back to the Reconstruction era, just after the Civil War: the Civil Rights Act of 1866 and the Ku Klux Klan Act of 1871. Both were created to fight the KKK’s reign of terror during that period in the South, Kaplan said. 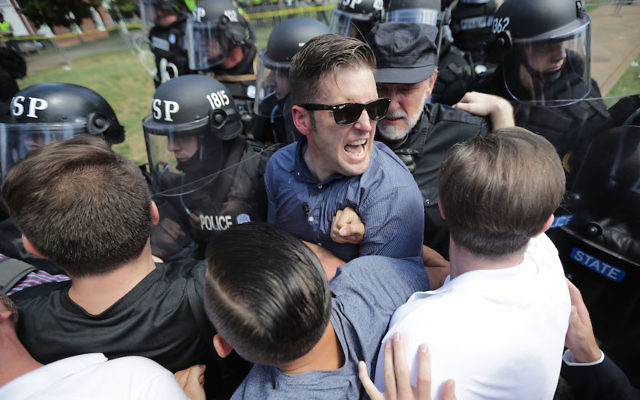 In an interview with The Jewish Week, Kaplan said the synagogue in downtown Charlottesville, Congregation Beth El, “is a big part of the story. Members of the synagogue will say they were terrified that weekend” — so much so that they removed Torah scrolls from the building in case it was attacked. One scroll that couldn’t be removed from the building is behind a glass display case, had been buried during World War II to hide it from the Nazis, and was dug up only after the Holocaust — a history that prompted one congregant to point out the irony of the scroll being endangered by Nazis once again.

Nazi websites at the time featured calls to burn down the synagogue, and neo-Nazis who marched through town shouted slogans like “Blood and Soil!” and “Jews will not replace us!” Some of those passing the synagogue wore battle fatigues and carried semiautomatic rifles. The synagogue’s president, meanwhile, thought it would be prudent to urge members to leave through the back door after services and to travel in groups.

Despite the threat to the synagogue that weekend, the plaintiffs don’t include any members of the Charlottesville Jewish community, Kaplan said. One woman who was originally a plaintiff, Hannah Pearce, a local dermatologist, was removed from the case because it was felt by the judge that the emotional trauma she experienced didn’t rise to the level suffered by other plaintiffs. Neither do the plaintiffs include Heather Heyer’s mother, Susan Bro, who, according to Dunn, may be planning a separate action. 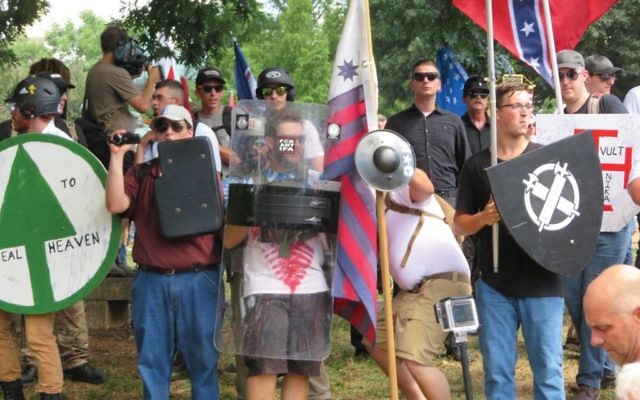 Confederate flags and other symbols of white supremacy were plentiful over the weekend in Charlottesville. Ron Kampeas/JTA

The case took shape shortly after the horror in Charlottesville, Kaplan said, recalling that she had launched her own law firm only days before the events in that city. Formerly a partner at Paul, Weiss, Rifkind, Wharton & Garrison, she said the legal team at her new firm, Kaplan Hecker & Fink, LLP, was still working at folding chairs and card tables as news of the weekend’s events hit them and brought their work to a standstill.

Kaplan immediately picked up the phone to talk with colleagues, proposing that something needed to be done, and, “within 48 hours, we were on a plane to Charlottesville,” where they met with local residents, some of whom are now plaintiffs. Dunn and Levine joined the case shortly afterward at Kaplan’s behest.

Levine expects the case to go to trial sometime in mid-July, he told The Jewish Week, although he cautioned that delays in legal matters are often par for the course. Kaplan, meanwhile, is confident that her team will win the case.

Whatever the outcome, passion is certainly on Kaplan’s side. At the Museum of Jewish Heritage event, Kaplan recalled that she used to wonder a lot as a child what she would have done had she grown up in Europe during the Holocaust.

“If I had lived in Europe during those years, would I have had the courage to do what Hannah Senesh and others did?” she remembered asking herself, referring to Jews who fought the Nazis.

The attorney is also astonished at the level of hatred among the defendants toward Jews, she said at the museum. Although these people certainly hate a lot of groups, “their animating hatred appears to be anti-Semitism. … I have to assume that most of these guys live in places in this country, rural areas, where there are no Jews or very few Jews. They’re not living on the Upper West Side. It’s just astonishing to me how much of their motivation seems to be not only anti-Semitism, but a very, very potent admiration and look back at Nazi Germany and  the Holocaust. There’s no getting around that.”

Appearing recent on “Cape Up,” a podcast from the Washington Post’s Jonathan Capehart, Kaplan said that while she hopes plaintiffs injured in Charlottesville are awarded compensatory damages in the case, the “larger point” is “to make it so that anyone in the future in this country who tries to do anything like this again knows that they’ll be hit by a lawsuit like this, they will be hit by damages, and they won’t be able to do it because they’ll have this huge albatross hanging over their head of what will happen if they do.”