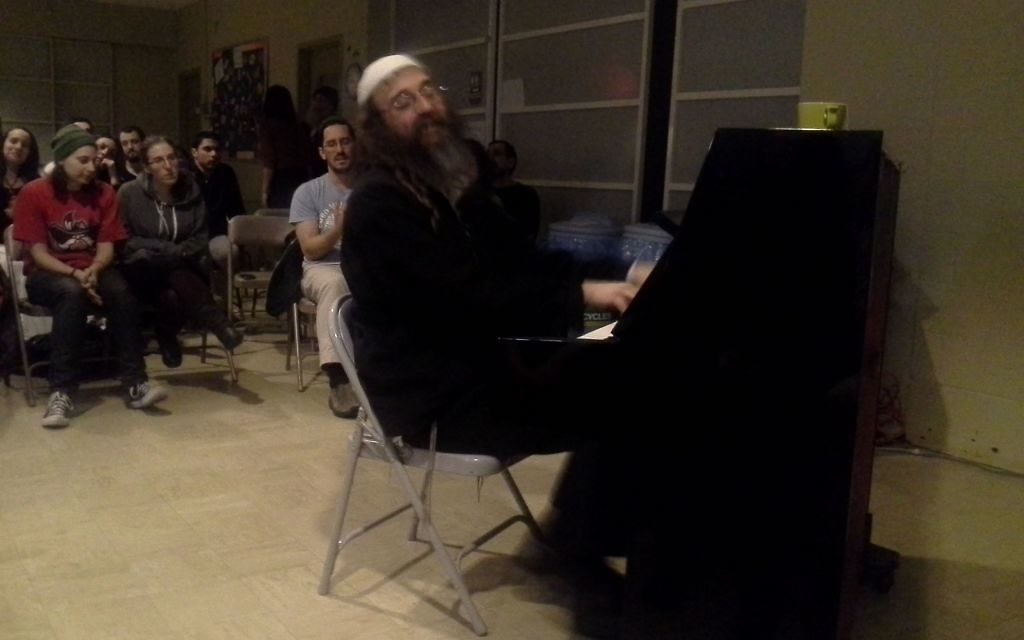 Rav Raz Hartman is usually found in a crowded shul in Jerusalem’s Nachlaot neighborhood, reached by a steep staircase. His shul fuses music and mysticism, attracting Jews across the denominational and sartorial spectrum. A Jerusalem hipster may be swaying next to someone dressed in a flowing white robe.

This month, Rav Raz, as he is known, is traveling internationally to promote his third solo album, "Hamakom Sheli" (My Place), He visited New York City this week.

Dozens of people gathered in the Chabad of Washington Heights this past Thursday night to hear the Israeli-born singer, pianist, and teacher who leads the prayer community V’ani Tefillah. His new album features his own original music as well as reinterpretations of the songs of Shlomo Carlebach and Breslov Hasidim. Hartman is in the process of bringing his new, inspired music and mystical thoughts and teachings to communities all over the world. He performed at Mechon Hadar in Manhattan this past Monday night.

In a darkened room at the Chabad House, peppered with candles along the walls that threw long shadows across the corner from which he performed, Rav Raz sat behind his keyboard, singing his original, haunting compositions and cajoling the crowd to join in. When, at a certain point, he felt that the audience was lagging in its participation duties, he offered a semi-serious thought about the numerical value of the word caf, which means palm, and encouraged the audience to put their palms together and clap along. And once they got going, it was difficult to stop, such was the power of his melodies, which straddled the line between poignant classical pieces and accessible, memorable pop niggunim.

Hartman was raised in a non-religious household, and, as a young man, had every intention to pursue a career as a professional pianist. This plan was derailed when his college Hillel rabbi introduced him to Shlomo Carlebach, who encouraged the young musician to tether his melodic longings to his budding spirituality. At V’Ani Tefillah, Hartman follows in much of his great teacher’s footsteps.

Barry Lichtenberg, who visits Rav Raz’s Nachlaot shul once a year, says, “Davenning with Rav Raz echoes what early Hasidic prayer must have felt like, at once intimate and strange, passionate and ecstatic. The music goes straight from your heart to heaven."