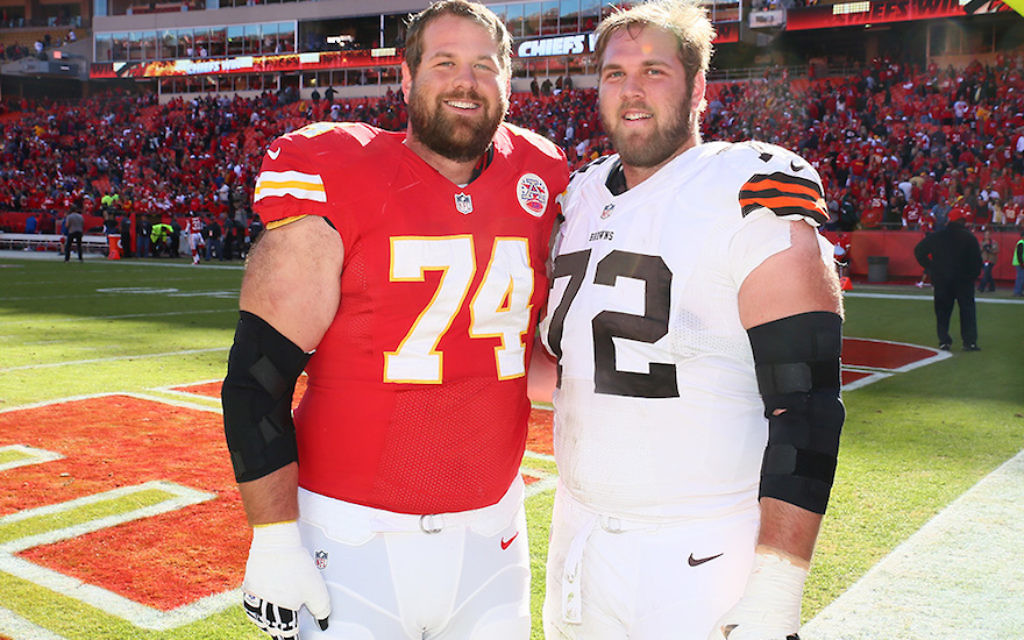 “My size comes from a childhood that included an excess of matzo ball soup, latkes, and tons of white rice,” the 30-year-old jokes. “But of course my brother’s similar physique suggests that genetics had plenty to do with it.”

That would be his (only relatively) little brother, Mitch, 27, the Kansas City Chiefs’ newest starting right tackle, who stands 6-foot-5 and weighs in at 320 pounds.

As it happens, Geoff and Mitch Schwartz aren’t the first pair of Jewish brothers to play in the National Football League — they’re just the first to do so since 1923.

“Once we heard the stat, we realized just how rare this really is,” said Mitch, standing at the edge of the Chief’s indoor practice field after morning drills. “So we both thought it was important to share our story — for Jewish kids, and in general, about how we both wound up where we are.”

Indeed, the story of how two nice Jewish boys grew up to be a couple of “hogs” (an endearing and decidedly non-kosher nickname for offensive linemen) could fill a book. The cover of “Eat My Schwartz,” by Geoff and Mitch Schwartz. (Courtesy St. Martin’s Press)

“Eat My Schwartz: Our Story of NFL Football, Food, Family, and Faith” lands in stores and online September 6. Co-written by the brothers, with novelist and humorist Seth Kaufman, it’s a lighthearted memoir about all the topics in the subtitle and how often they intersect. Sports fans will find plenty of insider info on the NFL and major-college football (Geoff and Mitch played for Pac-12 contenders Oregon and Cal, respectively). But from the opening pages — a scene of the brothers frying up latkes on the first night of Hanukkah, following their bubbe’s recipe — their Jewishness is front and center.

“The people who know us know that’s a big part of our identity, but I think it was important to share as much as possible in the book,” Geoff Schwartz told JTA from Detroit, where he spent the preseason as a member of the Lions. “I mean, my whole family — we’re proud to be Jewish and to be raised in the tradition and going to temple.”

Growing up in West Los Angeles — and attending Adat Shalom, a Conservative congregation — the brothers were always involved in sports. But neither started playing football until high school, in part because their parents didn’t want practices and games to interfere too much with Hebrew school.

In the book, the brothers quote their mother, attorney Olivia Goodkin, on her eventual acceptance of her sons’ football fate, given that each stood well over six feet tall at his bar mitzvah.“‘I started out worrying that they were going to get hurt — but then I realized it was the other players I should be worrying about,” she said. “‘They were like trucks hitting small cars. And I started to kind of feel like maybe this was their destiny.’”

As for their father, Lee Schwartz, a business consultant: “I just kvell,” he told Los Angeles’s Jewish Journal in 2012, on the eve of that year’s NFL Draft, in which Mitch would join his brother in the league when the Cleveland Browns took him early in the second round. “It’s a surreal experience to see my kids on the field, on TV.”

Mitch credits his (slightly) bigger brother for paving his way on the field, in the kitchen and in life. Geoff was a seventh-round pick in 2008, and he’s a study of resilience: He’s endured multiple injuries and various ups and downs, from getting relegated to a practice squad, to getting cut, to getting signed to a big contract, to getting released again just before this season starts.

Meanwhile, after the Browns selected him with the 37th overall pick, Mitch started every game over four seasons in Cleveland. This spring, free agency landed him a five-year, $33-million deal with the Chiefs, making him one of the highest-paid right tackles in the league.

Whether tackling football, their faith or food, the Schwartzes write with the interested but uninitiated in mind — readers will learn the finer points of proper blocking in one chapter, find a primer on the lunar Hebrew calendar in the next. And if you’re hungry, just refer to the appendix of family recipes for step-by-step instructions on applying the perfect schmear (“Don’t overdo it; too much cream cheese will melt and run on a just-toasted bagel”).

The conversational memoir flows from one milestone to the next — personal, professional or often both. There’s October 27, 2013: “The Schwartz Bowl,” the brothers’ first and so far only on-field meeting when Geoff, then with the Chiefs, faced Mitch and the Browns in Kansas City. Then there is the weekend in 2014 when two life-changing moments coincided: Geoff’s wedding — a traditional Jewish affair on the beach at Santa Monica — happened at the height of NFL free agency frenzy.

Only hours after signing his ketubah, Geoff would sign the largest contract of his career.

The brothers also grapple with some of the compromises they’ve had to make in pursuit of their careers. “I’m very clear that when I have to, I choose football over the [high] holidays,” Geoff said. “Some people have a hard time with that concept. I don’t.”

But he does fast on Yom Kippur whenever possible, an act of atonement to which he devotes several paragraphs in the book. “Toward the end of a fast I usually feel great, like I’ve achieved something,” he writes. “I feel lighter, not physically, but mentally. I’ve endured, and I feel energized and clear.”

In the book, Mitch recalls a visit he made in the first weeks of his rookie year to the Pro Football Hall of Fame in Canton, Ohio. He encountered a group of Orthodox teens who, upon learning he was a Jewish football player, started peppering him with questions and begging for autographs. “I think it takes experiences like that to make you realize just how much bigger it is than you think it is,” he said of being one of a handful of Jewish players in the NFL.

Of course, the brothers understand the special appeal they have to Jewish fans — after all, they’re Jewish fans themselves. The book traces their own family’s fascination with Jews in sports, from Hank Greenberg and Sandy Koufax to Mark Spitz and Dolph Schayes.

Mitch delves into the lesser-known history of brothers Ralph and Arnold Horween, the Harvard All-Americans and stars of the Chicago Cardinals backfield, in whose NFL footsteps the Schwartzes eventually followed. He learned that the Horweens actually played under an assumed name — McMahon — which raises questions as to whether they were guarding against anti-Semitism in football, or perhaps feared disapproval from other Jews for playing football.

Though Geoff recounts a few blatantly anti-Semitic comments, many players they meet simply don’t understand, or misunderstand, what it means to be Jewish, he said. “People think it’s more complicated than it really is,” Geoff explained. “So we let them know how not-complicated it is.” When trying to explain their traditions to teammates who might have “never been around a Jew before,” they find that food — like latkes and matzo balls — can be a good access point, Mitch said, “especially for linemen.”

Part of the motivation for the writing the book, according to Geoff, is for the brothers to, well, start writing their own next chapters. “You don’t know how long you’re going to play — certainly not forever,” he said shortly before the latest cut. “And there’s a lot we want to do after football.”

For Geoff, that could be a career in media or writing — this book is only his latest foray in communications. He co-hosts his own podcast, “Block ’Em Up,” and this summer guest-wrote the popular “Monday Morning Quarterback” column on SI.com that’s usually penned by National Sportswriter of the Year Peter King.

Yet, the ultimate ambition is for the Schwartz brothers is to finally team up — as co-hosts of their own cooking show.

“Cooking has become a creative outlet for both of us, something we enjoy exploring and experimenting with. We love the improvisational element of cooking, and the social element, too,” Geoff writes. “Food, which is so important to us as athletes — it fuels our work — provides the forum for us to create meals that look good and taste fantastic.”
The brothers already prepped a “sizzle reel” of them interviewing a Beverly Hills chef and then whipping up some saffron seafood risotto at home. The book details early talks with TV execs — it’s unclear whether the Food Network or the NFL Network were more interested — but “we’re definitely still working on it,” Geoff confirmed.