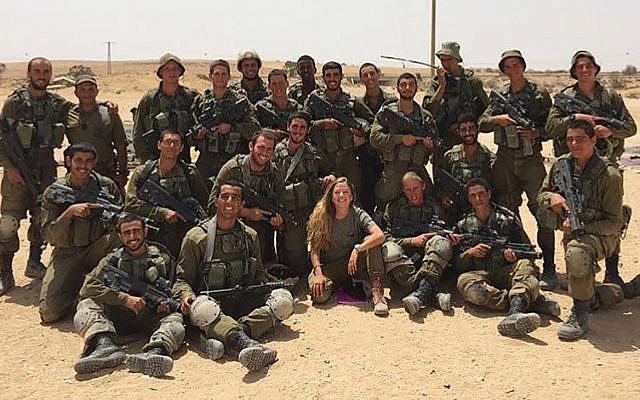 The author, center, with a group of soldiers she trained in the IDF.

As I sat on my bed, laptop open in front of me, email drafted and ready to go, I held my breath and just clicked Send. I was hesitantly deferring Brown University for another year, widening the gap even further between myself and my future classmates at college. The thought that I would be a 20-year-old freshman kept coming to mind. I knew, however, that I had made the right decision, as I was deferring to finish my service in the Israeli Defense Forces.

When I was in the eighth grade, my older sister drafted into the IDF as a Lone Soldier (a volunteer with no family in Israel), planting a seed in my head that one day I would join the Israeli army as well. I saw what she had gained through the army — camaraderie, challenges, independence — and it seemed like an opportunity I could not miss. We are not Israeli and have never lived there (until our service), but each year of my childhood, we took family trips to Israel, allowing us to fall in love with a country over 3,000 miles away from our home in New Rochelle.

Now, having completed my first semester of college, I know I had the experience of a lifetime. My service began during the summer of 2016 in a base in the middle of the Negev with intensive basic training. The day I enlisted, our company commander yelled at me for saluting with the wrong hand, walking on the gravel and scratching my nose. I thought that the ground was being pulled out from under me, and the only thoughts that kept looping through my mind were, Why did I do this? What am I trying to prove? I continued on through the next two months, being terrified of my 19-year-old commander, but learning the basics of how to be an instructor and establishing the beginnings of relationships that would last throughout my entire service.

Following basic training, I completed another two-month course for shooting and marksmanship instructors. Finishing the course, I moved on to instruct shooting and marksmanship and then was promoted to be a commander to other instructors. I have traveled all over the tiny country from the border with Lebanon to the border with Egypt, visiting more than 15 different bases, teaching mostly — but not only — Israeli infantry soldiers how to properly use their personal guns. I also taught soldiers in the Air Force and in the Navy, soldiers in the most elite units of the IDF and even American soldiers who came to Israel to learn our techniques. I am qualified on five different types of guns, including the M4, Micro-Tavor, Negev, Mag and sharp-shooting guns.

I never could have imagined myself writing a sentence like that two years ago.

During my time in the army, I was always the youngest. All the Israelis in my draft class had done their own gap years before enlisting, while I was just out of high school. So, when I arrived on Brown’s campus last fall, it was very strange for me to be suddenly the oldest. All my peers were experiencing that first, really big transition in life — living away from your parents’ house for an extended period. But my transition has been a little bit different.

Brown has been a long time coming for me. Finally, this past summer, after pushing off my matriculation for two full years, the time had come. As I started to pack, finish up the summer reading assignment and select classes, I had the same butterflies that everyone has before starting their college experience, with an additional one: What if I’m ostracized for having spent time serving in a military, and the Israeli military, no less? I was nervous for how people would react, even questioning if I should keep it a secret. I asked myself how I would answer the unavoidable question: Why did you do that?

But the reactions I got from students were ones of interest and excitement to learn more. The fact that I spent time in the IDF comes up quite a bit, as people are confused as to how I am a 20-year-old first year. When they ask about my job there, I answer, “shooting instructor,” which leads to questions about whether that was hard. I explain that basic training was, but after that I loved every minute. I know from the two other girls here at Brown who served in the IDF that this has generally been their experience as well.

Before arriving, I wondered if my peers at Brown would be able to understand how I could have both proudly volunteered for the Israeli Defense Forces and be a strong supporter of peace and nonviolence. Often, I struggle reconciling those two aspects of myself, so I can only imagine what it might be like for someone else. Brown has allowed me to ask those questions, to probe the issue, and to try to continue to develop answers to these questions. This happens through casual conversations with my peers, through Friday night dinners at Chabad and through serious class discussions.

Additionally, there is a thriving Jewish community at the Brown Chabad and Hillel, and a community of students who regularly engage with the reality of the conflict between Israel and Palestine and are always working towards building a deeper understanding of it. I’m on the executive board of Chabad, but have chosen not to join any of the Israel groups on campus this year. I wanted to try and expand my horizons as much as I could, and not just stick to engaging with issues that I have spent the large majority of my life engaging with. Many of the students in various groups on campus, including Brown Students for Israel, J Street and Jewish Voices for Peace, consider themselves supporters of Israel and have created a special space on our campus to talk about the divisive questions and also to do fun activities.

Today, I feel as though I’m on a different planet. I’ve traded in my green uniform for big jackets and thick sweaters to survive the New England winter. I’ve switched roles, from being the instructor to becoming the student. I spend my time in the library, rather than in the field. I’ve been privileged enough to have been granted the opportunity to serve in the IDF and I’m thankful for everything it taught me. I developed attributes of problem solving, leadership, patience and adaptability.

I was honored to serve, and I am eternally grateful to Brown for allowing me to have that experience and for including me in this special community that I have already been able to grow in and learn from. I am excited to continue developing my thoughts on many different issues, Israel included, to learn more about why people do what they do, and to continue asking myself every day how I can continue to serve the Jewish people and a movement towards peace and nonviolence.

Olivia Tulkoff is a first-year at Brown University. She is a 2016 Write On For Israel graduate.