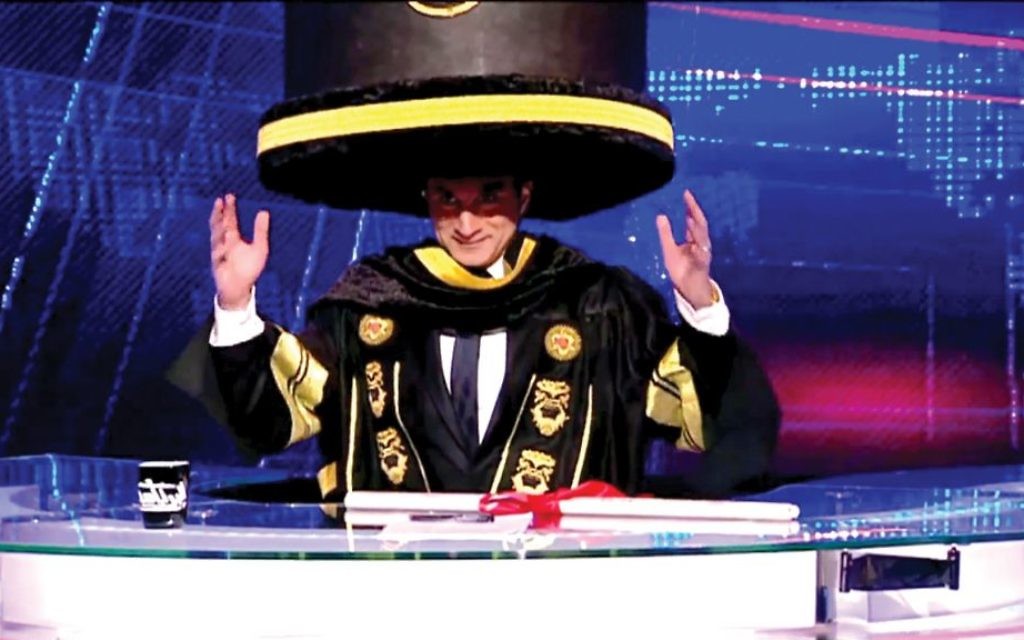 While working as a producer on “The Daily Show,” Sara Taksle, produced a documentary on Bassem Youssef, “Egypt’s Jon Stewart,” above.

In 2013, when “The Daily Show” producer Sara Taksler set out to document the work of high-wire-act comedian Bassem Youssef — known as the Egyptian Jon Stewart — she didn’t dream she would end up charting the birth and death of a revolution. Nor could she have imagined that in the U.S. of 2017, the film’s quips about free speech under thin-skinned dictators would acquire a whole new layer of meaning. “The people at Bassem’s show inspired me because they do what I do at ‘The Daily Show,’ but with incredibly high stakes,” she wrote in a press release. “Now that I live in a country where the president is offended by ‘Saturday Night Live,’ I’m realizing stakes are getting high here, too.”

“Tickling Giants,” Taksler’s second feature-length documentary (her first was 2007’s “Twisted: A Balloonamentary,” about the making of balloon animals), follows Dr. Bassem Youssef through the ups and downs of Egypt’s Arab Spring. A heart surgeon-turned-comedian, Youssef is the creator of the television show “The Show” (“Al Bernameg” in Arabic), the country’s first uncensored political satire. The documentary opens with Youssef being celebrated as “a voice for the people,” someone who stands up to authority and tells it like it is; but as the country careens from autocracy to free elections and back to autocracy, he turns from being democracy’s champion to its canary in a coal mine. By the end of the film, in a flip reminiscent of George Orwell’s “Animal Farm,” “the people” call for him to be silenced.

Combining original footage, news clips and snippets from both “Al Bernameg” and “The Daily Show,” “Tickling Giants” had its premiere at the 2016 Tribeca Film Festival, where it was nominated for Best Documentary Feature. It opened at the IFC Center here in March. Skipping a broad theatrical release in favor of direct viewing, the film hit iTunes this week, with subsequent releases on Amazon, Google and other online streaming services set for next week. Since its premiere the documentary has screened privately at 350-some venues around the world; considering its focus on Arab politics and culture, it has had a surprising success with general audiences, Jewish ones in particular. A large slice of its viewings so far, Taksler told The Jewish Week in a phone interview, has been in Hillels, synagogues, JCCs and other Jewish institutions.

You can say whatever you want, unless it pisses off Mubarak.

On June 15, “Tickling Giants” will screen at Temple Beth El of Northern Westchester in Chappaqua. “[We] knew immediately that this film had a valuable, timely and relevant message for us,” Liz Schonfeld, co-chair of the American Jewish Committee’s Westchester/Fairfield Film Festival Committee, told The Jewish Week in an email. She noted that the documentary corresponds with the organization’s goal of “advancing human rights and democratic values” and furthering Jewish understanding of other communities. The screening will be followed by a Q&A with Jewish and Egyptian human rights activists. 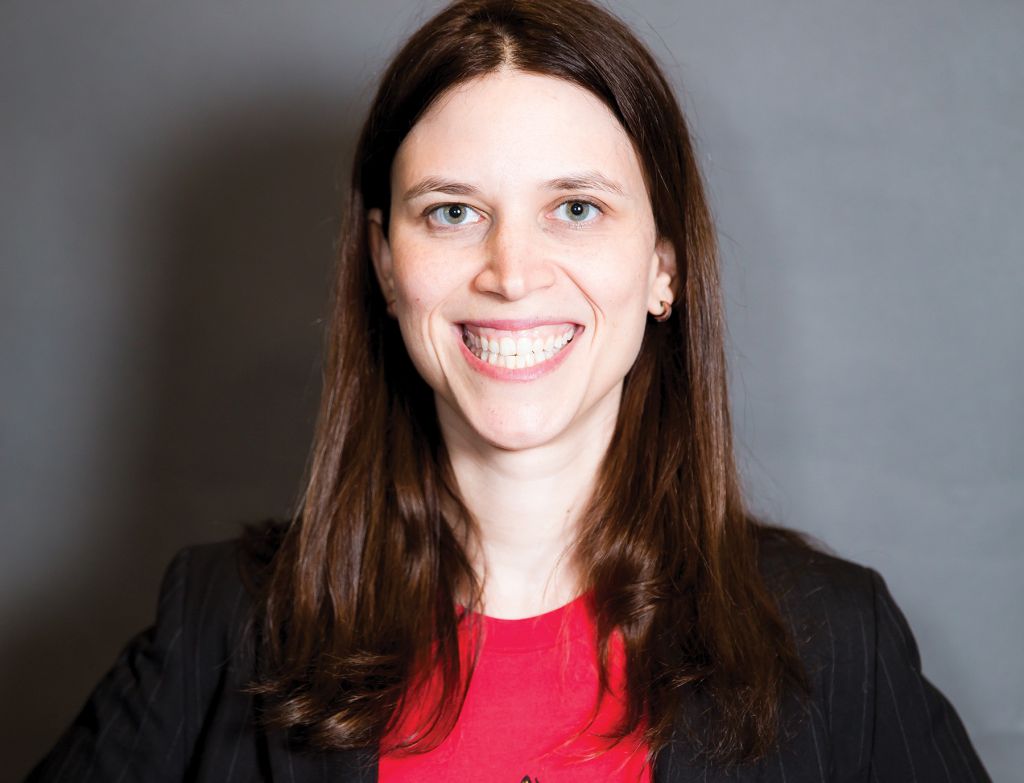 There is no recent precedent for political satire in Egypt. Under President Hosni Mubarak, the rule of thumb had always been “you can say whatever you want, unless it pisses off Mubarak,” as Youssef explains in the film. Yet in 2011, after a sweeping 18-day protest ended with Mubarak’s stunning resignation, Youssef quit his job as a heart surgeon in Cairo to create Egypt’s first news satire. Modeled closely after “The Daily Show,” Youssef’s version offered a comic but clear-eyed alternative to the largely fabricated coverage of the state-controlled media. It started out as a series of five-minute skits, recorded in Youssef’s laundry room and posted to his YouTube channel; within a year it evolved into the most popular daily TV show in Egyptian history, drawing roughly 30 million nightly viewers — more than 40 percent of Egypt’s population — at its peak.

It was a joke about the president’s hat, not his politics, that did the comedian in.

Taksler met Youssef in June of 2012, when, in preparation for “Al Bernameg’s” second season, he and several crew members came to observe the making of the Daily Show. At the time, “neither of us could imagine that he would become an international celebrity,” she recalled. She had already been mulling the idea of a documentary about the production of “The Daily Show,” she said, and “Bassem and his crew were doing a show very much like ours, with all the same ingredients, but with stakes that were so much higher.”

Youssef happily agreed to the idea of filming a documentary about the making of “Al Bernameg.” Taksler, anxious about traveling to a region in the midst of a violent eruption, ended up “sitting on the idea for a year.” She was prodded into action in March 2013, when Youssef was charged with “contempt of Islam” over his skits lampooning the newly elected president, Mohamed Morsi. Several months into his first term, Morsi amended the freshly inked democratic constitution to grant himself unchecked legislative powers; but it was a joke about the president’s hat, not his politics, that did the comedian in. 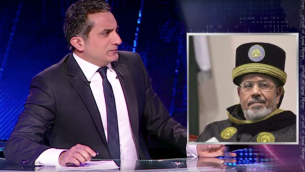 Youssef’s arrest lasted only six hours, but the incident, along with the global outcry it provoked, illustrated the need for urgent action. “I felt this was a really important story that I had access to tell,” said Taksler.

Taksler worked on the documentary alongside her job as a senior producer of “The Daily Show,” which meant putting in “nights, weekends and vacations. … I haven’t had a day off for years now.” The bulk of the filming onsite was done by a local hired crew that hung around the production office of ‘Al Bernameg’ in Cairo, following the sketch writers and film editors and fleshing out storylines. Interviews with Youssef were done mostly via Skype, but Taksler did make several trips to Egypt. Inside the show’s production offices, it felt just like “The Daily Show”; outside, things were tense. “It’s not easy to travel to Egypt, particularly as a woman, and I am clearly not an Egyptian woman. I stood out,” Taksler remarked. “I never knew if it was a good idea to let people around me know that I was Jewish, and that was unsettling. Most people would be fine with it … some would not.” In mid-2013, after one of the cameramen was beaten by a street crowd that mistook him for a foreign spy, the crew took to filming demonstrations from inside a moving car.

“I never knew if it was a good idea to let people around me know that I was Jewish, and that was unsettling.” – Taksler

More than a year into the making, with over a hundred hours of footage at her disposal, “I had no story yet, no beginning, middle or end — just a series of quick start-stops,” said Taksler. But the Arab Spring had plenty more plot twists in store. On June 30, 2013, the one-year anniversary of President Morsi’s inauguration, the Egyptian people once again flared into protest mode, demanding the new president’s resignation. By July 3, they got their wish, and Morsi was unseated in a military coup led by Gen. Abdel Fatah al-Sisi, who instituted a temporary military rule. In an echo of Mubarak’s tactics, protests of the coup were silenced, leaving at least 817 civilians dead, according to Human Rights Watch. In 2014, contrary to his prior statements, al-Sisi announced he would run for president, and the crackdown on critics and journalists intensified. Through it all, like a tiny life-boat riding a tsunami, Youssef kept on telling jokes. 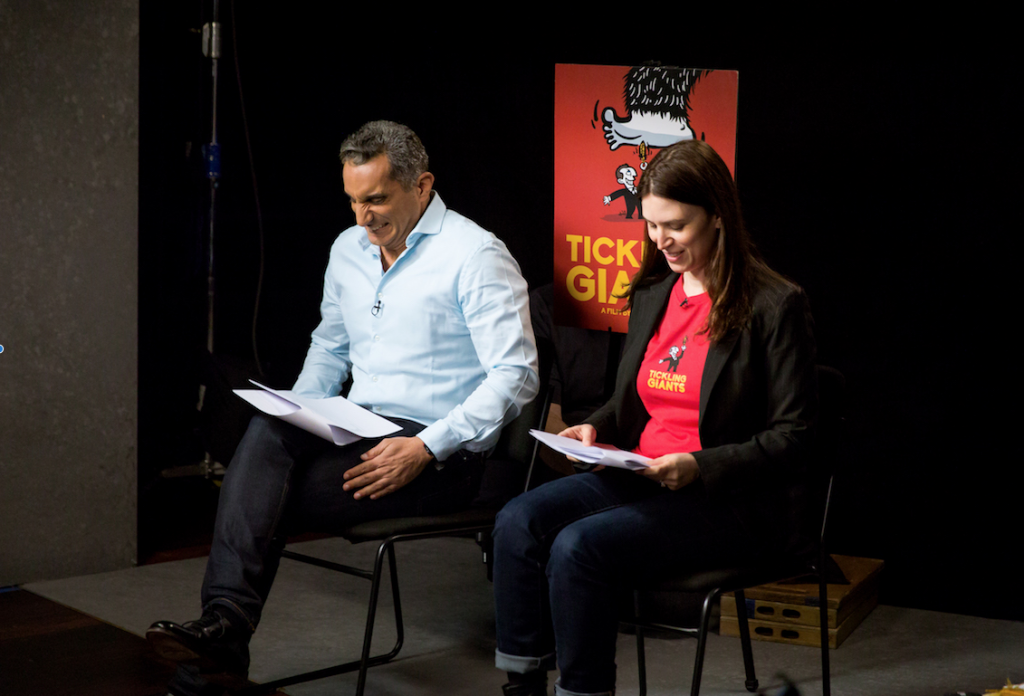 Al-Sisi and the military were hugely popular, and Youssef’s persistent quips about the general’s undemocratic ways were turning fortunes against him. In one of the documentary’s most chilling scenes, angry protesters amass outside the studios of “Al Bernameg” — at the same spot where only a few scenes earlier a cheering crowd had stood — and call for Youssef’s execution for “insulting the army and the people.” “That’s so funny,” Youssef smiles, his face ashen. Soon after Al-Sisi is elected president and”Al Bernameg” is terminated. Youssef left Egypt shortly after, and today lives with his family in Los Angeles.

Filmed in the crisp newsy style of “The Daily Show” and suffused with the show’s distinct humor, the movie’s appeal to Stewart fans and liberals in general is pretty much a given. The real surprise, said Taksler, was the interest it generated among conservatives and libertarians. Some of the film’s prominent champions include advisers to former Republican candidate Ted Cruz and representatives of the Koch Brothers network, who have been promoting the film among their constituents. “What I’m realizing is that both sides care deeply for freedom of speech, and both sides think the other doesn’t,” Taksler said. Post-screening discussions revealed that while conservatives and liberals have very different talking points about free speech, “both sides are now becoming keenly aware of the issue. … I met people from all backgrounds who supported free speech and were worried about politicians abusing their power.”