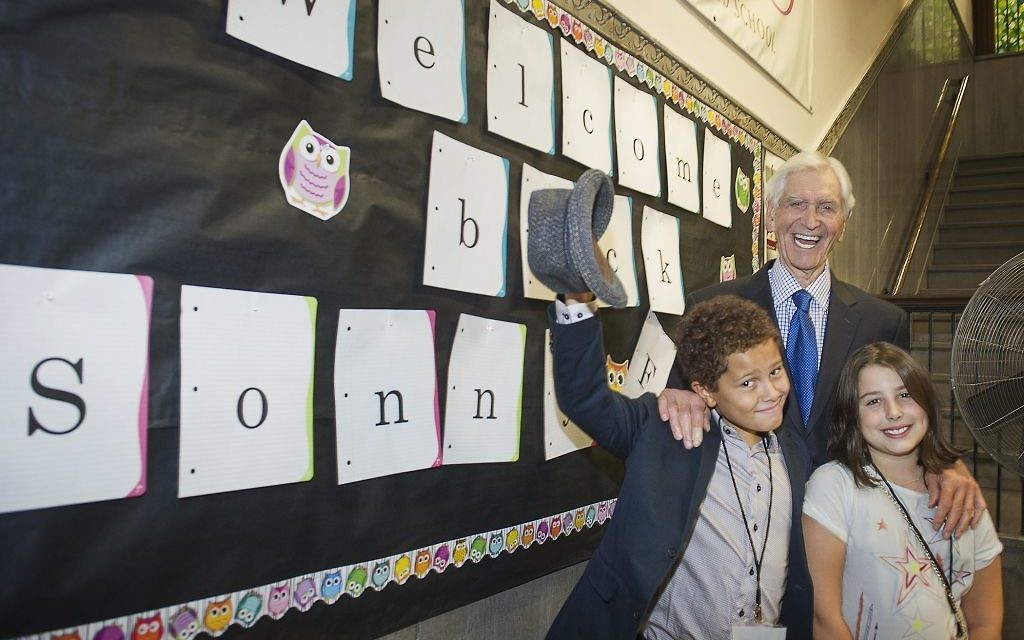 During my interview with Sonny Fox, he broke out into song. While reminiscing about his Brooklyn childhood, he described Friday night dinners, which he remembers as frenzied and warm.

“Grandpa would come home late from the synagogue with other old men with nicotine stained teeth. We would sing and the tables would bounce — we would pound on the table. This is what the young Jews grew up with,” Fox said, and proceeded to break into a traditional Jewish niggun, a wordless melody.

On Oct. 24, the former “Wonderama” host, war correspondent and German prisoner of war, returns to his old neighborhood to headline an evening celebrating the songwriters and lyricists of 20th-century Broadway.

“From Broadway to Brooklyn,” to be held at his alma mater, P.S. 217, will raise money for arts programs at the school. During the evening Fox will share personal stories from his work on Broadway and show excerpts from The Songwriters, the series he produced for CBS Cable. Featuring such Broadway icons as Alan J. Lerner, John Kander, Fred Ebb, Charles Strouse, Sheldon Harnick, Burton Lane and Yip Harburg, Fox will offer a window into the lives and minds of the people who pioneered the uniquely American art form of musical theater.

Irwin “Sonny” Fox is best known for the award-winning children’s program “Wonderama,” which he hosted from 1959-1967. Last year, after the publication of his book “But You Made the Front Page: Wonderama, War, and a Whole Bunch of Life,” the 90-year-old Los Angeles grandpa made what he called “His Farewell Tour,” visiting childhood haunts.

It was during that trip that he hopped the Q-train to Flatbush and stopped by P.S. 217, where he hadn’t stepped foot since 1938. But some teachers remembered him from their own “Wonderama” years, and soon they were introducing him to students and showing him around the school. Not long after the visit, Fox offered to do a performance to help the school raise money.

In a wide-ranging interview with The Jewish Week, Fox reminisced about his Depression-era childhood, his professional life and highlights of Saturday’s show. He also explained why the show focuses on Broadway songwriters, rather than his “Wonderama” years.

“I want to make people appreciate the potent power the creative people had,” Fox said.

Writing lyrics for a musical is harder than it may seem, he said. “When you write a score every song has to have a purpose. It has to introduce you to a character, deepen the emotional impact of what’s going on. It has to fit in context of the developing plot,” he said. Shows also have to be true to the time period in which it is set, a songwriter has to become experts in multiple historical eras. Take for example, Alan Lerner and Frederick Loewe, who shifted from the American Gold Rush ("Paint Your Wagon") to 19th-century London ("My Fair Lady") to Medieval Europe ("Camelot").

“If you want to write "Gigi" in turn-of-the-century France, you have to write anew,” he said.

Through storytelling, Fox said he hopes to impart to the audience “a deeper sense of what opera is to the Italians” — a feeling of pride in America’s homegrown theatrical form, and through hearing about what the composers and lyricists have done, he hopes audience members will “not only be enthralled, but have a deeper sense of appreciation” for the people behind some of Broadway’s most iconic shows.

Fox spent his childhood on East 9th Street between Foster Avenue and Avenue H. He celebrated his bar mitzvah at Young Israel of Flatbush and graduated from P.S. 217 in 1938.

He fondly recalls his “Farewell Tour’ from last year, where he returned to places from his childhood. Getting off at Newkirk Plaza, Fox recounts the experience of seeing his old house as a parking lot. In his mind, the street still echoes with memories of playing hockey and stickball, pausing for cars and — and horse-drawn wagons — to pass through.

A lot has changed in the eight decades since. “The most striking difference is that when I went to P.S. 217 the neighborhood was half Irish and half Jewish,” he said. Fox’s old neighborhood, now called Kensington, hosts large populations of immigrants from Uzbekistan, Tajikistan, Bangladesh and Pakistan as well as a growing contingent of black-hat and chasidic Jews moving over from nearby Borough Park. The student body also includes children of Caribbean, Latino and East Asian immigrants from nearby Ditmas Park. School notices are printed in English, Spanish, Urdu, Bengali, Tajiki and Uzbek; more than 30 languages are spoken in the students’ homes.

“That’s what’s so wonderful about New York. I was a child of immigrants, these are new children of immigrants in the same situation. I think of schools as Laundromats taking them through the cycles of education and making them American. It keeps regenerating,” he said.

In “Broadway Comes to Brooklyn,” every one of the lyricists and composers featured is Jewish. What’s the connection between Jews and musicals? Fox says that the musical inclinations of so many children of Ashkenazi immigrants is due to “the religious fervor of that time — the fervent music that was part of the joy of Eastern Europe.”

Fox’s own family is in that mold: His grandparents continued the traditions — and recipes — of the Old World in Brooklyn.

“I can remember going to my grandma’s house for Friday night dinner. She was one of the worst cooks in the world,” he said, noting that "everything was fried." But, he fondly remembers the challah and the Sabbath candles.

“Zeyde [grandpa] always wanted to be the president of the synagogue. If they didn’t make him president he would make a new storefront synagogue,” he said. Fox remembers carrying the Torah around the synagogues with his grandfather.

Fox explained that music was one sector not closed to Jews, unlike many professions and Ivy League schools, which had caps on how many Jews they would take. “This was a time where Harvard had a Jewish admissions quota. This brought us Richard Rodgers, Hammerstein, and Alan Jay Lerner, all those wondrous people were Jews,” he said.

When asked if Fox had any hopes for the future of P.S. 217, he said, “my hopes are getting up in the morning,” he quipped.

“It’s a far better school than when I was there, much more interesting and exciting,” he said, referring to the new arts programs at the school.

Fox was asked to join the board of Friends of P.S. 217, a nonprofit formed to raise money to support the school's academic and enrichment efforts. But he turned the position down. “I’m 90. I’m not joining any board any more,” he said. Fox hopes this fundraiser can help raise P.S. 217’s profile.

Fox said that the experience of writing a memoir changed the way he perceives his whole life. “When I started writing, I didn’t think I would write so much about my life in Brooklyn. Brooklyn was so bloody vivid, I wanted to recreate what it was like to grow up there, lower middle class, in that part of the world,” he said.

Fox said that nothing that happened in his professional life was anything he planned. “It was as if there was a hand that said, 'You’re not going there, you’re going here,'” he said, referring to how fate had led him down certain educational and professional paths. After graduating from Madison High School (Midwood High School hadn’t existed yet, Fox joked), Fox said he had no ambition or self-confidence. He matriculated at North Carolina State University, “the big textile college in the country.”

“Because I had a pushy Jewish mother, when the teachers said I wasn’t doing the work I was capable of, she said I was bored.” Fox said that he skipped three grades, not, perhaps, the best move, to be several years younger than his high school peers. “I knew nothing about long division — or girls,” he said.

After graduating high school in January instead of June, North Carolina State told Fox he had to wait for the fall to matriculate. Fox didn’t want to wait for six months “doing nothing,” and decided to go to NYU and get transferrable credits. “Fate picked me up and said this is what you’re going to do. The phone would ring and my life would change,” he said. Fox ended up getting his career start from that one semester of radio classes at NYU. Fox said, “My feeling about life is don’t make any plans about life.”

Fox described "Wonderama" as “a four-hour show with no real production budget.” The show had a four-hour block on Sundays. While he felt that other people on the channel were good performers who “did characters and threw pies,” Fox does not consider himself a performer.

“It took me a while to discover what my asset was. I realized the kids were my asset,” he said. Fox began to engage with children. “I understood what a fascinating prospect it was. If you could get them to trust you, if you could listen to them, they have so much to offer,” he said.

“They have a great interior life you don’t know anything about,” he said. “If you ask kids about God (Fox noted that it would make a great column for this writer), kids don’t speak in abstracts,” he said. Fox remembers asking one child, “How tall is God?” “One kid said 5'8, one said 5'11. I remember saying to a 10 year-old boy: “You keep saying he, what if god is a girl?”

“You can see something flicker over his face as he deals with that question,” he said. Fox said that the thing he learned from kids is you have to be able to get them to feel you respect them. He said, “You have to let the silences hang in the air. If you stop and stay with him or her and let the silence go for [a while] they will go again and give you more great stuff.” Fox said these were conversations he “bets they don’t have with their parents,” and noted that by talking to children, “you will discover how fervent their lives are.”

As for “From Brooklyn to Broadway,” he makes a passionate pitch:

“Come and see the show you’ll have a lot of fun,” he said. “The audiences end up laughing, cheering and crying. These people can do that to you. When Sheldon Harnick talks about his song “Do You Love Me” from “Fiddler on the Roof”, it’s emotionally rousing and funny,” he said.

Then, like any good Jewish parent he adds a touch of guilt, “Don’t miss this, I’m not going to be around much longer,” he said. “It could be my farewell performance."

For more information about Friends of P.S. 217 or to make a donation, visit www.fo217.org.