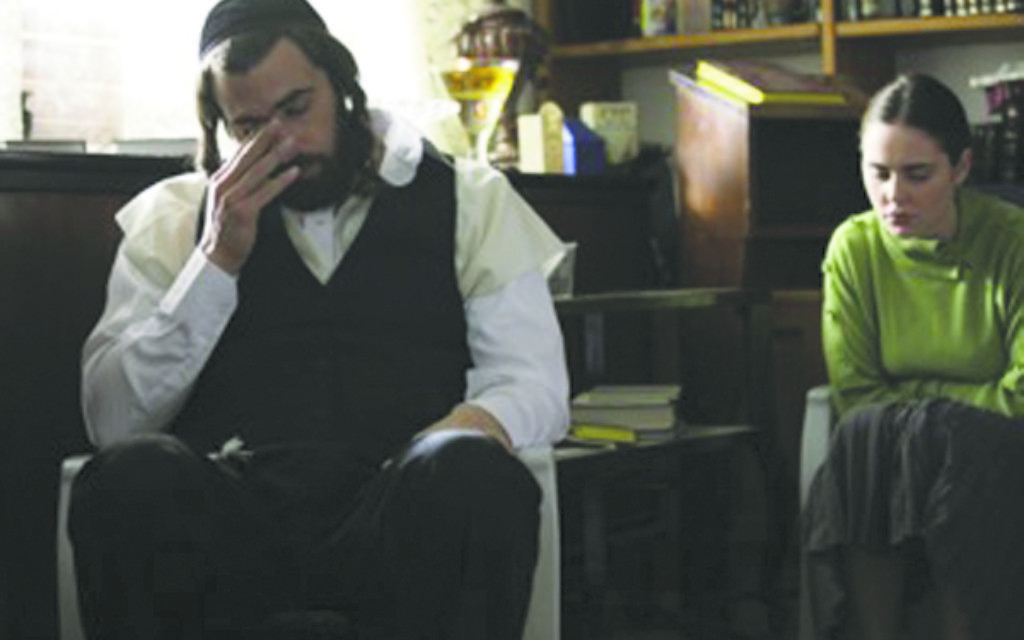 In a recent interview in these pages, Richard Peña, the retiring director of the New York Film Festival, remarked on the explosive growth of the Israeli film industry during his quarter-century in that post. Appropriately enough, this year’s festival, celebrating its 50th anniversary, offers three examples of how the industry has matured.

Nowhere is this process more apparent than in Rama Burshtein’s ravishingly beautiful first feature film “Fill the Void.” Burshtein, a native New Yorker, is also product of the haredi world of Tel Aviv, which this film intelligently and warmly depicts. It’s the kind of community in which a panicky old woman can ask her rebbe for advice on what kind of stove she should buy (and she gets a deliciously funny answer, worthy of any discount appliance store commercial), but the rebbe will not exert pressure on a young woman in the matter of whom she should marry. I’m hardly capable of judging the real-world truth of this depiction, but as cinema it is sterling in the creation of a supportive extended family of like-minded Orthodox Jews, uneasily confronting modernity from a self-imposed remove. (And as some filmmakers would say, “If that’s not how it is, it is how it should be.”)

The plot of “Fill the Void” is downright biblical. When her sister dies in childbirth, 18-year-old Shira (Hadas Yaron) considers the possibility of putting aside her own dreams of marriage to an eligible bachelor in order to marry her brother-in-law Yochay (Yiftach Klein, best known here for his work in “Policeman”). The internal dynamics of family and friends are complicated. Her mother Rivka (Irit Seleg) is fearful that Yochay will marry a Belgian woman and disappear with her grandson. Aunt Hanna (Razia Israely, in a performance that combines dignity with deeply hidden malice) is concerned that her matchmaking efforts will have been fruitless. Shira seems to be balancing her concern for Yochay and the child against her attachment to the unmarried Frieda (Hila Feldman). Everyone has secrets, many of which Burshtein reveals slowly in a cunningly orchestrated series of communal events. Others are only implied, which makes their potential power to shape the future all the more unnerving.

Burshtein’s script is clever, moody and thoughtful, but her direction is even more than that. As she slowly connects a series of carefully off-center compositions, the film moves unobtrusively towards the remarkable final movement in which the characters seem to have gotten what they want, but to no avail. The image of Shira, wearing her glistening white wedding dress almost like a shroud, squarely in the middle of the frame for one of the few times in the film, rocking back and forth in what seems to be a mixture of prayer and near-hysteria, is indelible. It is a stunning consummation of the film’s formal and thematic concerns, combining the visual progression towards this moment with the emotional ambiguity at the heart of its profoundly nuanced performances. Like Otto Preminger, Burshtein uses long takes and close-ups to underline the emotional opacity of her characters, even to themselves. In that respect she has been blessed in her choice of Yaron (who reminds me of Lindsay Lohan before her rap sheet became longer than her filmography). Yaron has a remarkably mobile face, capable of suggesting a veritable fever-chart of emotions in a single glance.

Meanwhile, back in the more familiar world of Middle East politics, two other Israeli films in this year’s event make an interesting pairing, as they reflect on one another from the three decades between their creation. “The Gatekeepers,” directed by Dror Moreh, is a highly unusual, endlessly fascinating documentary that consists mainly of interviews with six former heads of Shin Bet, the Israeli security bureau; their tenures to back to 1980. None of these men have been interviewed for the public before. The secrecy with which the organization conducts its work, answering directly to the prime minister, is legendary. This film is not the Israeli equivalent of an interview with heads of the CIA; the director of Central Intelligence is frequently interviewed and gives open-door testimony before Congress, and several former CIA directors have written autobiographies (of unsurpassed tediousness, it should be noted). A nearer American equivalent might be a series of interviews with former heads of the National Security Agency. Those guys don’t talk to anybody.

The half-dozen men who are the subject of “The Gatekeepers” (in chronological order of their directorships, Avraham Shalom, Yaakov Peri, Carmi Gilon, Ami Ayalon, Avi Dichter and Yuval Diskin) are smart, witty and shockingly frank. Tracing the work of the agency from the Six-Day War through the various peace initiatives, intifadas, terrorist waves and lulls, they reach some surprising conclusions. Shalom, a foxy grandpa type who resembles a clean-shaven Wilford Brimley, says bluntly, “I loved the idea of a Palestinian state, but we received no direction from the politicians.” Diskin, who looks like a movie cop, explains that you have to give the pols “binary options,” that when they are faced with three or four possibilities the nuances and gray areas leave them stumped.

All six are disturbed by the amount of power they were given. “There was no such thing as an illegal order,” Ayalon says grimly. Most disturbing of all, though, is the sheer pessimism with which all view the immediate future. As the present has been shaped by terrorism and escalating responses to it, the job of Shin Bet chief has become ever more trying. Shalom could be speaking for all of them when he says, “The future is bleak. … We have become more cruel.”

None of this would come as a shock to Amos Gitai. Israel’s most-garlanded filmmaker was a peace advocate even before his own near-death experience in the Yom Kippur War. One of his most important early documentaries, “Field Diary” (1982), is included in the Masterworks sidebar that is part of this year’s celebration of the festival’s half-century. Taken alongside “The Gatekeepers,” the older film becomes more revelatory thanks to hindsight. An encounter with Bassam Shaka’a, filmed two years after the car bombing that cost him his legs, seems more poignant when contrasted with one of the Shin Bet sextet saying that they had been investigating the activities of the infamous Jewish Underground, including their attack on Shaka’a, and analyzing newsreel footage from “The Gatekeepers” of one of the perpetrators congratulating himself on the bombing. Regrettably, “Field Diary” is a film that, while important in its time, has subsequently been surpassed by later, similar efforts, including those of Gitai himself. The opportunity to see it on a big screen is valuable, but its impact has been dulled a bit by the passage of history.

The 50th annual New York Film Festival will run though Oct. 14 at the many venues of the Film Society of Lincoln Center. For information on the Festival and it many other film programs, go to www.filmlinc.com.