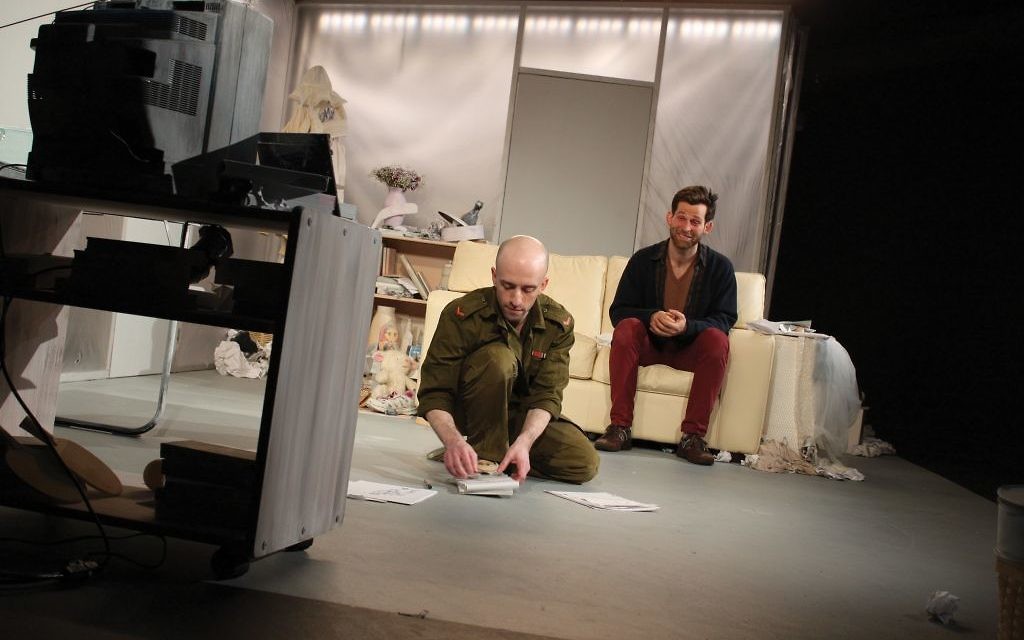 With fresh terror attacks occurring on an almost daily basis, the world seems like an ever more dangerous place. At this month’s 20th Anniversary Fringe Festival in New York, a trio of plays by female Jewish playwrights depict anxious young people grappling with violence and its aftermath. While the Fringe Festival has become known over the last two decades for zany sex comedies and light musicals, this year’s festival is notable for the solemnity of its fare, including its Jewish plays.

In Cassie Seinuk’s “From the Deep,” which premiered last year in Boston, an imaginary space of the mind becomes the meeting ground for a pair of abducted men, an Israeli Jew, Ilan (Charles Linshaw) who has been taken by Palestinians as a POW, and an American college student, Andrew (Jeff Marcus), who disappeared in Boston. In Elena Zucker’s one-woman show, “Thread,” a Jewish woman faces opprobrium from her friends after mistakenly “liking” a Facebook post by a Palestinian. And in Zoe Kamil’s “#Blessed,” a high school student sees herself as having re-enacted the biblical story of the rape of Dinah after she is sexually assaulted by a male classmate.

“From the Deep,” directed by Lindsay Eagle, is based on the case of Gilad Shalit, the Israeli soldier who was captured by Hamas in 2006 and held for more than five years. At around the time of the first anniversary of the kidnapping, Seinuk noticed that there was a rash of abductions of college students in the Boston area, where she lives. She decided to write a play that brought together two different victims and gave them the opportunity to help each other, through their dialogue, to survive the mental and physical torment of captivity. Seinuk has a family history of oppression, given that her own parents are Cuban Jews; her grandparents, on both sides, fled Cuba in the 1960s.

Seinuk’s play is set in the “Room of the Missing,” an imaginary space that is reminiscent of virtual reality, although time passes at a different rate for each captive. There are three doors on the set, one for each of the characters to make his entrance and exit, and a third which leads to a place from which the prisoner will never be found.

“You can only go through your own door,” Seinuk explained. “From the Deep,” she said, is about “facing who you are and whatever keeps you trapped in a struggle over your sexuality, gender, or past traumas.” The play’s title comes from a song by Israeli musician Idan Raichel, “From the Depths,” which is itself based on the first line of Psalm 130, “Out of the depths, I have cried to You, O Lord.”

By contrast to the confined space of “From the Deep,” Elena Zucker’s “Thread” takes place amid the travels of its protagonist, Mimi (Australian actress Mischa Ipp), who is an attorney in New York, to London and back. Written in 2014, at the time of the Israel-Gaza conflict, the crisis in the play is triggered by Mimi’s accidentally liking a Facebook post that calls for a third intifada.

When her Jewish friends react in disbelief, Mimi is reminded of the sexual encounter that she had in London with an Arab man, Firas, the person whose post she had inadvertently endorsed. In a succeeding scene, Mimi imagines herself running through the Catacombs in Jerusalem at the time of the Roman conquest of the city; in another, she imagines herself to be underwater. Mimi’s internal turmoil stems in part from an unplanned pregnancy that resulted from her night with Firas, which causes what Zucker calls “the potential for immense grief in her life.”

Zucker told The Jewish Week that she sees Facebook as “our modern-day version of a collective unconscious.” Similarly, she said that Jewish identity is “driven and animated by mysterious forces and voices at work throughout history,” by conceptions, stories, and allegiances that are often dimly understood. She asks herself, she said, what it means to be Jewish and what her obligations are regarding the Arab-Israeli conflict. “How am I implicated as an American, a Jew, and as an artist?” The play ran last year in Perth, Australia, where one critic, David Zampatti of The West Australian, called it a “taut, intense cyber-thriller.”

Finally, Zoe Kamil’s “#Blessed,” directed by Miranda Cornell (a rising sophomore at Vassar College), shows a naïve but pious Christian girl, Liana (Anna Dale Robinson), falling into the clutches of a predatory classmate, Michael (Thaddeus Kolwicz), who, unbeknownst to her, has already raped her best friend. As Liana sorts out who her real friends are, her situation is contrasted to that of another boy named Michael (Tyler Crozier), the drug-dealing son of a rabbi.

The play culminates in a mind-bending scene between Liana and Jesus, who describes himself as a “brown Jew” (and is played by an actor of color, Ian Fields Stewart), and encourages her to speak out against her attacker — “Silence,” he insists, “is the ultimate sin” — even as he refuses to tell her what exactly happened to Dinah in the Bible. The play’s title, with its Twitter hashtag, comes from a popular tweet, often used ironically, in which people “celebrate” events in their lives that may be quite mundane. (#BH, for “Baruch Hashem,” is the Orthodox Jewish equivalent.)

Kamil, who is 20 and attends Marymount Manhattan College, grew up in a secular Jewish family in San Francisco. She first started learning about Judaism while attending the Jewish Community High School of the Bay. When her Torah class got to the section in the Bible about the rape of Dinah, her teacher treated it, she recalled, as a “taboo, dirty subject.”

That memory stayed with her when she attended the Young Playwrights, Inc. summer retreat in New York (the program founded in 1980 by Stephen Sondheim), which is where she and the director first met. She researched the play by watching videos of Christian teenagers attempting to reconcile their faith with the sexually charged world of dating.

By the conclusion of the play, Kamil said, all of the characters have had to sort out their relationships with their respective faiths. The play asks, she said, “what it means to be blessed. Liana thinks that she’s blessed at the beginning of the play, but doesn’t understand what it means. By the end, she’s not sure that it’s even possible.”

Sad to say, this may be the lesson of all three plays: in a world riven by violence, the sense of being blessed, or even that of living in safety and security, may be more fragile and elusive than most of us hope and wish it would be.

The 20th New York Fringe Festival kicks off this weekend and runs through Sunday, Aug. 28, at different venues in the East Village (including the Lower East Side), Soho and West Village. General admission tickets are $18. Plays run on an irregular schedule; for locations and performance times, as well as ticket orders, visit fringenyc.org.