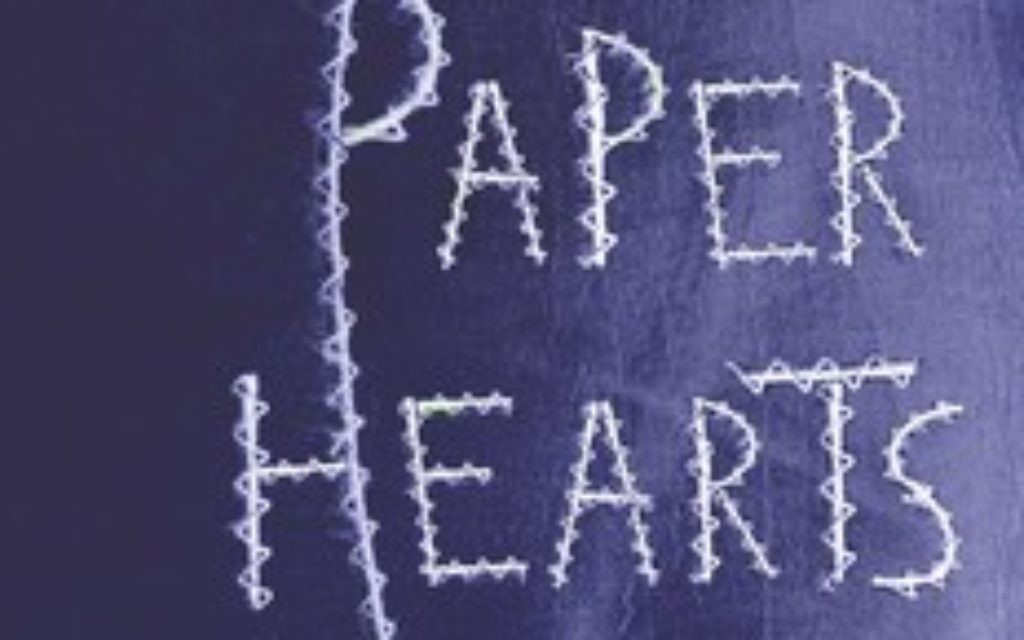 A birthday card made in the Third Reich’s most notorious concentration camp? Seems impossible, doesn’t it?

Yet that’s how a group of daring girls at Auschwitz celebrated a friend’s birthday on December 12, 1944, in an act that could have cost them their lives.

Zlatka and Fania, Jewish teenagers from Poland, are spared the gas chambers because they are able to work. Held captive in the same overcrowded barracks, they form a sisterly bond.

Told in free verse in the girls’ alternating voices, “Paper Hearts” by Meg Wiviott (Margaret K. McElderry Books/Simon & Schuster), the winner of a 2016 Christopher Award for Young Readers’ Books, is based on meticulously researched actual events.

Succinct, staccato language aptly conveys the brutality surrounding Zlatkas and Fania’s work in the Union Kommando, a group of female slave laborers inspecting bullets at a munitions factory in the Auschwitz complex:

Inventive formatting reflects the girls’ words and thoughts. The shape of a triangle is used to list the different categories of prisoners, denoted by colored triangles sewn on to their uniforms. At the top, “black” is for social undesirables, a level below, “green” for criminals, lower down, “pink” for homosexuals, and lower yet, brown for gypsies. The yellow star for the Jews is at the triangle’s base.

Zlatka and Fania’s friendship deepens as they bear witness to events of life at Auschwitz: the daily roll calls with an orchestra playing while new arrivals are either sentenced to death or to hard labor, Mengele’s recruitment of twins for his deadly experiments, the Muselmanns or walking skeletons, “Kanada,” the warehouse filled with prisoners’ confiscated belongings, an ill-fated uprising of the Sonderkommandos, Jews in charge of dragging the dead from the gas chambers, and their destruction of a crematorium.

At first, Fania scorns the Sonderkommandos, calling them “monsters,” who do “the Nazis’ dirty work.” Later she decides that she and the other Kommando girls are “no better,” making weapons for the Germans.

Survival is a balance

As news of the Soviets’ arrival in 1944 sparks hope, Zlatka learns that Fania’s birthday is imminent. She steals a pair of scissors and barters her starvation-level bread rations for other materials needed to make a greeting card.

With signatures and messages from all the girls, the heart-shaped origami birthday card, which is on display at the Montreal Holocaust Memorial Centre, is pictured in this remarkable book.

“Freedom, Freedom, Freedom/Wishing on the day of your birthday,” writes one of the girls. Not surprisingly, several messages contain the word “freedom.”