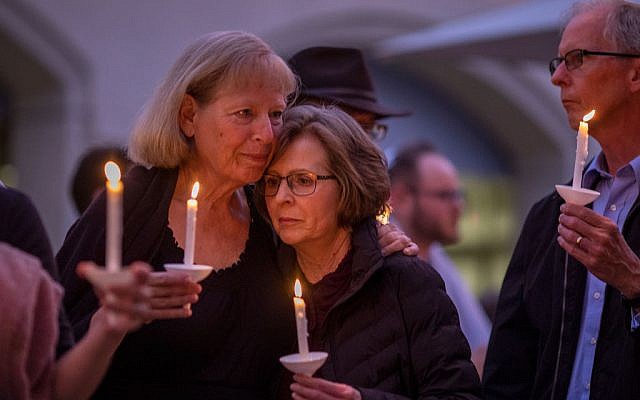 WASHINGTON — On the very last day of Passover — and six months to the day of the Tree of Life synagogue shooting — another gunman went to a Jewish house of worship and opened fire.

The assault, which has resulted in one death and three injuries, is the latest in a series of attacks that underline what authorities say is a disturbing rise in anti-Semitic violence and attitudes in the US. And experts warn that high profile attacks like that on Saturday not only kill and maim, but work to spread messages of hate that can spawn more violence.

“We’re living in a very difficult moment, but times like this only amplify what we know to be true,” said Jonathan Greenblatt, the head of the Anti-Defamation League. “Anti-Semitism is real. It’s like a disease, and it’s a disease that is spreading.”

On Saturday morning, one person began shooting inside a Chabad synagogue in Poway, California, just outside San Diego, authorities said.

A manifesto posted online hours earlier has been widely attributed to the suspected shooter, who lists as an inspiration Robert Bowers, who exactly six months earlier opened fire on a Pittsburgh synagogue, killing 11 people in the deadliest attack against Jews in American history.

Greenblatt said numbers compiled by the ADL continued to show anti-Semitism on the rise.

Anti-Defamation League CEO Jonathan Greenblatt speaking at the organization’s Never is Now conference in New York City, November 17, 2016. (Courtesy of the ADL)
“We have seen an increase in harassment, in vandalism, in violence. We have another report with new numbers coming out this week: They’re not good,” he said.

Little is known about the suspect, named by police as John Earnest and detained shortly after the attack, but the “manifesto” he is said to have written before the shooting has been spreading throughout the internet.

In the open letter, a self-identifying John Earnest sought to explain the motivation behind his assault by citing a hodgepodge of white nationalist theory. He lists Adolf Hitler, Ludwig van Beethoven, Bowers and Christchurch mosque attacker Brenton Tarrant as inspirations.

Eric Ward, an expert on extremism and the executive director of the Western States Center, said the letter was designed to propagandize the white nationalist cause.

“The manifesto reads like textbook white nationalist ideology: the idea of replacement theory, the false idea that white people are facing extinction,” Ward told the Times of Israel. “It’s a call for individual lone wolf attacks on Jews. It’s a call to arms. What we should understand, for this shooter, is that it’s an act of political theater.”

Authorities have not confirmed that the manifesto was written by Earnest. The San Diego Sheriff said that authorities are”looking into digital evidence and checking the authenticity of an online manifesto.”

If it was penned by the shooter, it would leave little doubt as that the synagogue attack was a direct outgrowth of another hateful massacre a world away, highlighting the transnational nature of the white nationalist movement.

Parts of the manifesto, supposedly written by Earnest, is in a question and answer format, mimicking one left by Tarrant, who killed 50 people last month in shooting attacks on two mosques in New Zealand.

In the manifesto, Earnest repeatedly cites Tarrant as an inspiration, admits to trying to burn down a mosque in the days after the Christchurch attacks, and says he started planning the synagogue shooting four weeks ago, right after Tarrant carried out his deadly rampage.

There are also indications that the shooter intended to livestream the attack, as Tarrant did.

The manifesto was posted online around 9 a.m. PST to 8chan, a social media platform frequently used by members of the far-right, along with a link to a Facebook page saying “a livestream will begin shortly” — suggesting that he meant to broadcast his attack for the world to witness.

Facebook pulled down a page linked to in his letter, but only after the shooting, according to NBC News. The social media giant was criticized after being slow to remove the videos.

Bowers too posted to social media shortly before he drove to shoot up a Pittsburgh synagogue, and had frequently used the social media site Gab to spread anti-Semitic messages.

Ward said the dissemination of white nationalist ideology is creating the environment for the next outbreak of violence, and he warned that media outlets dissecting the document were fulfilling the shooter’s wishes.

“The goal is to generate free publicity. Some folks refer to it as the art of terror,” Ward said. “You commit an act of terror not because of the actual violence, but for the larger theater built around it for propaganda value.”

Facebook, Twitter and other social media sites say they are taking steps to keep their platforms from being used as tools for violent far-right incitement, but critics say more needs to be done.

“CEOs and the heads of these companies need to make sure that their platforms have no place for hate,” Greenblatt said. “That should be pretty simple and straightforward.”