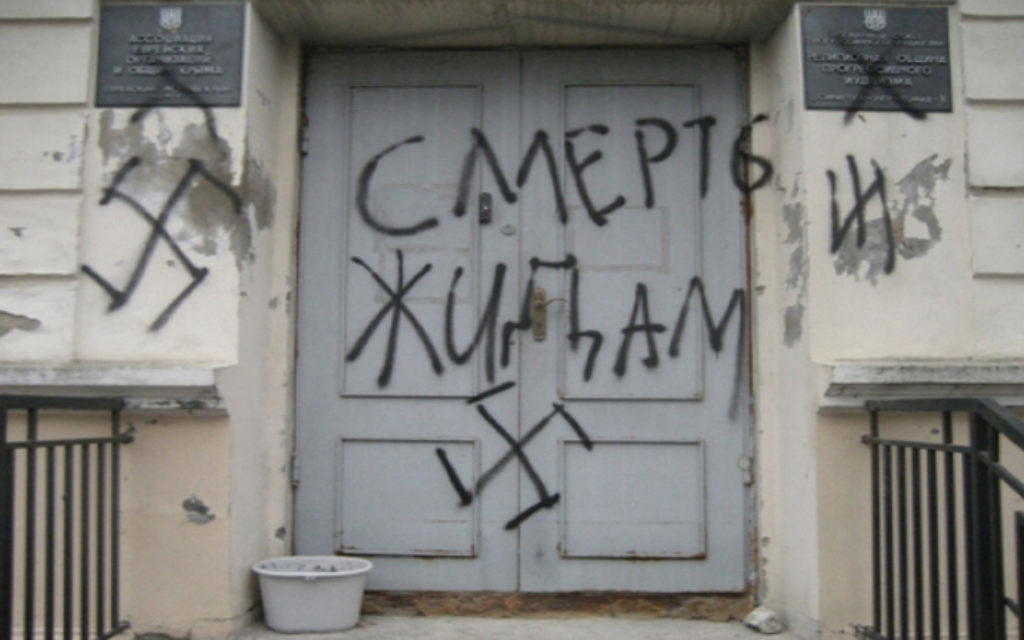 As Russia’s grip over the Crimean Peninsula tightened this week, the deteriorating political situation in Ukraine could threaten the security of the country’s Jewish community, leaders of Ukrainian Jewry warn.

Some say the recent street fighting in Kiev, the Ukrainian capital, and the prospect of a nationwide civil war, could unleash latent Ukrainian anti-Semites. Others say the danger comes mainly from Russians who may assume a growing degree of control over Ukrainian society.

Rabbi Yaakov Dov Bleich, the Brooklyn native who has served as Ukraine’s chief rabbi since 1989, declared at a press conference in Manhattan Monday that native Ukrainians pose little threat to the country’s 350,000 to 400,000 Jews, despite reports of several anti-Semitic incidents during social unrest in recent months.

But, he added, “Today everyone is afraid of [an expanding] Russian attack.”

Synagogues in two Crimean cities, Simferopol and Sevastopol, were closed last weekend because of security concerns.

Rabbi Bleich hinted, during the media event at the headquarters of the United Jewish Communities of Eastern Europe & Asia organization, that Russians, possibly dressed in Ukrainian nationalist garb, are responsible for the latest attacks on Jewish sites.

He accused unnamed Russians of committing well-documented acts of anti-Semitic vandalism — most notably the painting of swastikas and “Death to the Jews” on a Reform synagogue in Simferopol — in recent days as orchestrated “provocations” and “propaganda” to help justify Russia’s growing military occupation of Ukraine and to gain sympathy for their cause, as Nazi Germany did before the 1938 annexation of Austria.

“The Russians are blowing this way out of proportion,” he said, referring to the threat of Ukrainian anti-Semitism and the recent vandalism.

“Ukraine was successful in rebuilding a beautiful society” since it was established as an independent republic in 1991, after the breakup of the Soviet Union, Rabbi Bleich told reporters here. He said good relations between Jews and other Ukrainians were established over the last 23 years. “Jews fought alongside Ukrainians” in the recent demonstrations that forced President Viktor Yanukovych to leave the country.

“The Jews in Crimea are not choosing any side in this conflict, so I do not think they are threatened,” Yosef Zissels, president of the Association of Jewish Organizations and Communities of Ukraine (popularly known as the Vaad), told The Jerusalem Post. But less conciliatory, more concerned voices, fearing a return of the organized pogrom attacks on Jews that cost thousands of Jewish lives and forced many to flee from Ukraine and bordering countries for hundreds of years, are coming out of the region, according to stories in the Israeli press.

Alexander Boroda, president of the Federation of Russia, said leaders of Ukrainian Jewry should avoid commenting on the current political situation, according to The Jerusalem Post. Boroda called Rabbi Bleich’s recent comments, including his participation in a group letter that urged Russia to pull out its troops and “stop its aggression” against Ukraine, counter-productive. “Jews and rabbis should stay away from politics,” he said.

Some Ukrainian Jews see the Russian military incursion into Crimea as restoring order in the wake of a violent revolution, JTA reported this week. A JTA story described Leah Cyrilkova, who lives in Sevastopol, chatting with a group of soldiers in a city park. “I feel safer with them around,” she said. “These are crazy times, and now I know that if something bad happens, they will stop it.”

Rabbi Misha Kapustin, whose synagogue in Simferopol was recently vandalized, acknowledged that some Jews support Russian involvement in the crisis. “In this area there is considerable support for the Russian invasion, and the local [Crimean Jewish] community is very assimilated here. You should take into account the effect of Russian propaganda: the television they watch, what papers they read.”

“Many here are against the Russians but are afraid to talk,” Rabbi Kapustin, told Haaretz. “The Russians have invaded illegally and that must be opposed. So far, people have encouraged me and I don’t believe my petition will cause any harm to the Jews.”

In a similar vein, the worldpolicy.org website warned this week, that, “Anti-Semitism has always existed alongside the Ukrainian independence movement.”

Ukraine’s Jewish population faces no special threat, Rabbi Bleich said at the press conference, the day before he was to meet with U.S. Secretary of State John Kerry back in Kiev.

He conceded that the nationalistic Svoboda (Freedom) party has made statements that many see as anti-Semitic, including remarks by Svoboda leader Oleh Tyahnybok that “organized Jewry” dominates the country’s media and government, and several attacks on synagogues and individual Jews have taken place in recent months, but he called those isolated instances.

“The revolution brought out a measure of anarchy,” offering cover for individuals with anti-Semitic leanings, the rabbi said. “When there is a breakdown, minorities suffer. Jews are a good [target].”

Rabbi Pinchas Goldschmidt, president of the Conference of European Rabbis, said in a public statement in January that government and opposition tolerance of anti-Semitic statements gave anti-Semites “free reign” to attack Jews.

But most Ukrainian Jews do not fear a widespread outbreak of anti-Semitism, Rabbi Bleich told reporters here. “No one has run away. My community does not feel in danger. The community doesn’t feel threatened.” He said he warns all Ukrainians now to avoid known danger spots and “isolated areas.”

Rabbi Bleich said Ukrainian Jewry has not faced a major problem of anti-Semitism since it became an independent republic in 1991, following decades of state-sponsored anti-Semitism in the Soviet Union.

“There is not a danger to Jews today in Ukraine [from Ukrainians]. We are more afraid of the Russians,” in case Russia re-establishes control over Ukraine.

The rabbi was here to raise funds for two humanitarian organizations he has established, one focusing on the Jewish community (jewishkiev.org), and one non-sectarian (kievrelief.org), which will provide security for institutions of various minority communities and provide food for isolated elderly people.

Meanwhile, the Jewish Agency has announced that it is prepared to increase emergency assistance to Ukraine’s Jewish communities, and the Joint Distribution Committee activated emergency plans to assist Crimea’s estimated 17,000 Jews. These plans include stepped-up delivery of food and medicine to the elderly, increased security at three Hesed social welfare community centers and an emergency phone chain to determine the needs of clients.

Rabbi Bleich was among the leaders of several Ukrainian religious communities who signed a letter that criticized Russian aggression and urged the international community to “stop foreign invasion into Ukraine and brutal interference into our internal affairs.” Other signees of the letter, under the auspices of the Institute for Religious Freedom, included leaders of the Ukrainian Orthodox Church, the Ukrainian Greek Orthodox Church, the Evangelical Baptist Union, the Seventh-day Adventist Church, and the Ukrainian Lutheran Church.

The opposition leaders who now head Ukraine’s interim government have pledged to protect the interests of Jews and other minority groups, Rabbi Bleich said; the country’s minorities include Tatars, Poles, Romanians and Germans.

“We have a very good working relationship with the government,” he said.

“Nothing will better guarantee a future for Ukrainian Jewry than the end of violent confrontations and the restoration of future democratic rule,” Rabbi Abraham Cooper, associate dean of the Simon Wiesenthal Center said in a statement.

Rabbi Bleich said he would urge Kerry on Tuesday to move this year’s G8 Summit on industrialized countries to Kiev as a sign of solidarity with Ukraine, and to take a string stand against Russian President Vladimir Putin,

The rabbi said a U.S. military presence in Ukraine may be required. Ukraine, he said, need “boots on the ground” to protect “the Cold War from getting hot.”