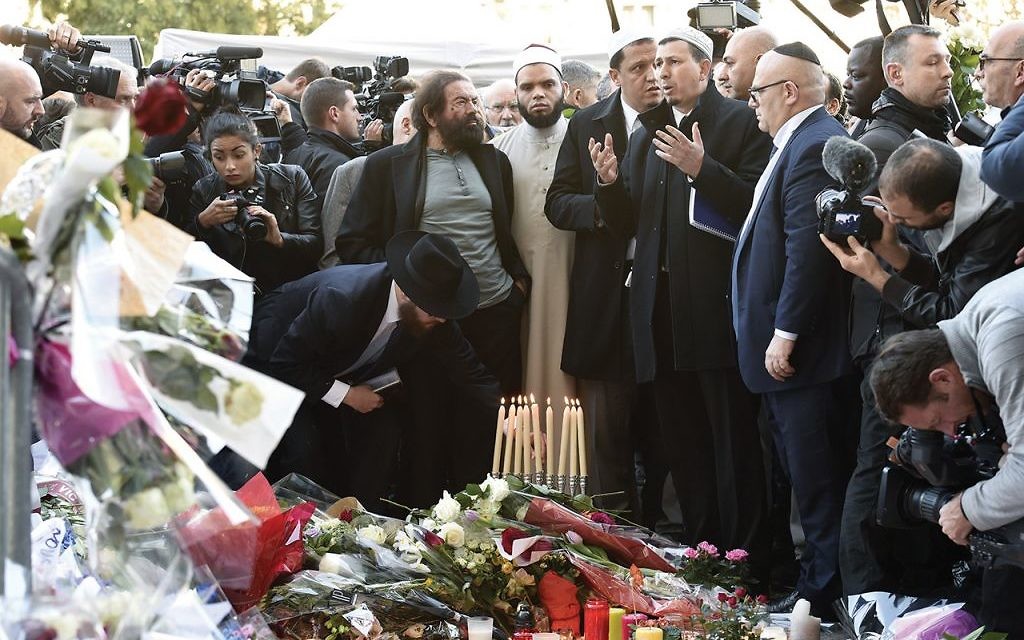 They, perhaps more than others, saw it coming.

When the 60 or so French Jews who attend services at the West Side Sephardic Synagogue gathered to pray last Friday night, the scope of the carnage in Paris was still unfolding.

Rabbi Eitan Bendavid, spiritual leader of the congregation, said he noticed “a pervasive sense of fear” among his French-born congregants, most of whom still have relatives back in France, and often go home for family visits.

But, he said, he did not hear a sense of surprise among his congregants. “People in my community have been saying for a long time that they saw stuff like this coming.”

By “stuff like this,” he meant the wide-scale terrorist attacks against French targets.

In Paris itself, where word of the suspected ISIS-coordinated attacks at six venues quickly spread in the French capital, Simone Rodan-Benzaquen, director of the American Jewish Committee’s office in the capital, heard similar sentiments in the Jewish community. Last week’s attacks in Paris “were confirmation of everything we feared,” she said.

In the 10 months since the terrorist attacks on the Hyper Cacher kosher supermarket and the offices of the Charlie Hebdo satirical magazine, which took a total of 19 lives, French Jews foresaw that while the Jewish community was an early target of fatal Islamist terror attacks, French society in general would be next, Rodan-Benzaquen said in a telephone interview. “It was not a question of if, it was a question of when and where.”

The Bataclan concert hall, where 89 people were killed on Friday night, was Jewish-owned for some four decades until earlier this year, and frequently hosted Jewish events. Like the restaurant and sports stadium where attacks also took place last Friday, it was not a specifically Jewish target in what French President Francois Hollande called “an act of war by ISIS.”

Rodan-Benzaquen and Rabbi Bendavid and other Jews with roots in France reacted in like ways this week, even as France mourned its losses — some 130 people killed and more than 300 injured — and pledged more security protection for Jewish institutions, and declared war on the ISIS terrorists who took responsibility for Friday’s attacks.

People familiar with the French Jewish community said French Jews saw the latest acts of terrorism coming, expect the next terrorism there to be aimed at specifically Jewish targets, are concerned but are not rushing to make aliyah or to move immediately to the United States or other Western countries, and feel that non-Jewish French citizens finally share their worries about the threat of Islamist terrorism. Now, said Rodan-Benzaquen, more people in France have “the knowledge that the cancer is spreading. There is the perception that the entire nation understands … what the Jewish community is going through. We feel less solitude.”

“French citizens now understand that they, and not just Jews, are terror targets,” the Times of Israel website quoted David Khalfa, a political consultant in Paris, as saying this week. “It was an illusion [of safety for most people in France]; we lived in this illusion and now we are waking up — and it’s a nightmare.

“Now everyone is a target,” Khalfa said. “This time it’s not only about symbolic targets … it has changed the whole perspective of fighting terror.”

“Whether attacks are against policemen or soldiers, against freedom of expression, or against Jews, what is being systematically, violently attacked are French democratic and republican values,” Rodan-Benzaquen wrote in an op-ed essay this week. “The goal of Islamic fundamentalism is to divide society, create a clash of civilizations, strengthen extremists that pretend to fight against them, and turn Muslims of every democratic country that they target against the rest of the population.”

“The Jewish community feels that France is under attack; it’s no longer a uniquely Jewish problem,” said Brigitte Dayan, a journalist with Jewish-Moroccan roots who moved to Manhattan from Chicago a dozen years ago and is knowledgeable about the French Jewish community. She added, “One friend [in France] said she is thankful to have bought an apartment in Tel Aviv last year.

“There have been so many attacks, so many threats [on French Jews] over the past months and years, that … the only ones not surprised” that ISIS has painted a bigger bull’s-eye over France “were the French Jewish community. I don’t think this is the end of it,” Rodan-Benzaquen continued.

She believes that while “the fear very much remains” among French Jews, “the next attacks may be [against] another Jewish target” outside France. She said she did not hear the increased level of discussion about leaving France as she did in the aftermath of the Hyper Cacher attack. “It’s a constant talk for the past year; people ask themselves if they should be leaving.”

Rabbi Bendavid said his congregants told him that it’s too early for their relatives in France to immediately reassess their aliyah or emigration options.

Avi Mayer, a spokesman for the Jewish Agency, which coordinates Israel’s aliyah activities, agreed that a spike in French aliyah following the latest attacks in Paris is not likely.

“In the immediate aftermath of the Charlie Hebdo and Hyper Cacher attacks in January, we saw a surge in the number of calls and inquiries from French Jews, and the number of new aliyah files opened in France tripled. We have not seen a similarly dramatic increase in aliyah-related inquiries in the wake of Friday’s attacks,” Mayer said.

The number of French Jews who made aliyah has steadily increased over the last few years, Mayer said, from 1,917 in 2012, to 3,293 in 2013, and 7,238 in 2014. “Aliyah numbers for this year are up by approximately 11 percent compared to this point last year,” indicating a 2015 figure of about 8,000, “and we expect the numbers to continue growing steadily for the foreseeable future,” he said. (Mayer’s figures, however, are contradicted by aliyah totals reported earlier this year, which indicated that French aliyah had slowed after an immediate increase in the months after the January terrorism in Paris, and that a decrease of nearly 20 percent this year was likely.)

The International Fellowship of Christians and Jews, an independent organization that promotes aliyah and supports Jewish life in many countries, announced this week that it is stepping up its work in France, is providing “emergency security aid to French-Jewish communal institutions,” and will bring “a special flight” of French Jews to Israel at the end of November.

“The first French Jews to move to Israel since Friday’s ISIS terrorist attacks arrived today [Monday]” with the support of IFCJ, the organization stated in a press release. “Two families landed at Tel Aviv’s Ben-Gurion Airport … met by IFCJ representatives.”

On Shabbat, Rabbi Bendavid led his West Side congregation in reciting two chapters of Psalms, one “to pray for the healing of all the people who have been affected by this devastating attack,” and one “to pray that our leaders will see the current situation with absolute clarity.” He said his congregation also said a prayer in French for the protection of France.

Many congregants, he said, added the French flag to their Facebook pages as a sign of solidarity.

In Paris, a Chabad-Lubavitch synagogue near the Bataclan theater said Psalms “for the departed and for the safety of all French citizens,” the chabad.org website reported.

The Grand Synagogue of Paris held a prayer service-rally Sunday night, sponsored by the country’s chief rabbi and the Conference of European Rabbis that included political officials and rabbis. “We pray for all the injured to recover quickly. Our hearts are with them and their families,” the Grand Synagogue’s Rabbi Moshe Sebbag said.

Members of the Jewish and Islamic clergy took part Sunday in a memorial service outside the Bataclan concert hall, many of them laying bouquets of white roses at the site.

“Anyone who uses hate speech has no place in France and those places that preach hate are not places of prayer but are those of a sect,” Hassen Chalghoumi, president of Imams of France, said at the memorial service. “1.5 million people are hostages of Daesh [an Arabic acronym for ISIS], 1.5 million people are hostages of these barbarians who are sullying the name of Islam and Muslims. It’s time to say no to this barbarity.”

The memorial was the idea of Polish-Jewish author Marek Halter, who writes frequently about his family, which escaped the Warsaw Ghetto during World War II.

Representatives of prominent U.S. Jewish organizations also condemned Friday’s terrorism. “One of the most sickening forms of human violence one can imagine,” said Ronald Lauder, president of the World Jewish Congress. “An outrageous, cowardly and premeditated assault not just on the people of France, but on all freedom loving people around the world,” said Jonathan Greenblatt, CEO of the Anti-Defamation League.

“It’s high time to drop the evasive language too often used to describe the perpetrators of these heinous crimes and get specific,” David Harris, executive director of the American Jewish Committee, said in a statement. “They are not just ‘violent extremists,’ though of course they are. They are not just ‘terrorists,’ though, of course, they are that as well. They are radical Islamists inspired by their interpretation of religion, however perverted it may be.

“Hoping the problem will one day go away is not a strategy, nor is tying the hands of, or eviscerating the budgets of, law enforcement, intelligence, and the military, nor is defending privacy rights at all costs, as some policy purists would do, even if it means endangering national security and personal safety,” Harris said. “Some judicious accommodations must be made in today’s democratic societies, or else the consequences could be profound. It won’t be easy, nor will it be quick. Yesterday’s tragic events in Paris should be another urgent wake-up call that, whether we live in France or elsewhere, our world needs, and is worth, defending.”