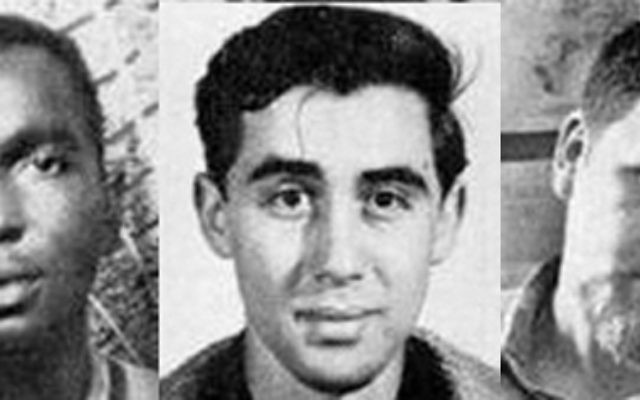 The naked light bulb was more harsh than bright. It was 3 a.m. on a sleepless, sweltering Florida night, June 19, 1964, in the St. Augustine jail. In a cell with two bunks were 17 Northern Jews, imprisoned for civil rights activities down South. Just 48 hours earlier they were relaxing at a convention for Reform rabbis in an Atlantic City hotel.

Now, on what felt like Passover’s leil shemurim (the Night of Watching), the men wanted to write something, a letter if only to themselves, a page for a future American seder explaining how and why they got from there to here. Someone had a piece of paper, the back of a report on the Ku Klux Klan. The night had hours to go but someone suggested the morning blessing, Matir Asurim, “Blessed are You, O God, who frees the captives.”

In civil rights history it has become legend, the “Freedom Summer,” and among Jews the legend may even be stronger. It has been frequently estimated that Jews comprised at least half of the nearly 1,000 whites who went South that summer, particularly to help with voter registration. Julian Bond, the civil rights leader was then with the Student Non-Violent Coordinating Committee (SNCC), a major organizer of Freedom Summer. Bond tells The Jewish Week that there had been no specific outreach to Jews, but “there was a great [spirit of] volunteerism in Jewish America, people who thought, ‘This is important, I need to be involved in this.’ Rather than us specifically appealing to Jews, this was something that appealed to Jews. It was an observable phenomenon, out of all proportion to the percentage of Jews in the general population.”

On June 21, Andrew Goodman, 20, Michael Schwerner, 24 (both Jews from New York) and James Chaney, 21, (from Mississippi) went off to investigate the recently burnt Mount Zion church in Longdale, Miss. This was the summer that volunteers were instructed to pack their duffels with bandages and antiseptics for first aid; $500, if they had to post bail; and four “head shot” photographs and the address of a hometown newspaper in case, well, in case something happens.

Earlier that day, Goodman mailed a postcard with a four-cent Abraham Lincoln stamp from the Deep South to the Upper West Side: “Dear Mom and Dad, I have arrived safely in Meridian, Miss. This is a wonderful town and the weather is fine. I wish you were here. The people in this city are wonderful, and our reception was very good. All my love, Andy.”

The bodies of Goodman, Schwerner and Chaney were found six weeks later. Goodman, a secular Jew, was never given a Hebrew name, but 50 years later, in Israel, Goodman’s brother Jonathan, now a Chabad chasid, recited Kaddish and lit a candle on his brother’s yahrzeit, all of their yahrzeits, 12 Tammuz (this year on July 10).

Bond recalls, “I was in Oxford, Ohio, at the training session for the summer volunteers. We had around 500 in the first [group], 500 in the second. Schwerner and Chaney, with the first group, actually left early because a church had been bombed [outside] Philadelphia, Mississippi, and that was their territory. Andy Goodman had the bad luck of just having been assigned to that section of Mississippi, so he went with them. I was in Oxford when Bob Moses, who was the head of Freedom Summer, told [the second group] that some of our people have been arrested and we haven’t heard from them since. For most of us that meant they were dead. I don’t think the volunteers understood that you could be killed for trying to register people to vote,” said Bond. “But what was interesting to me is that no one left. It was impressive to me that no one left.”

The previous week, on Jan. 17, the 17 rabbis had flown down to St. Augustine. In a black church Rev. Martin Luther King Jr. introduced the rabbis, “Here come Moses’ people,” and with the cheers in their ears they went out to march through what the Florida Times-Union years later described as a crowd with “broken bottles in their hands. Others had bricks. Red-faced and spitting, they screamed obscenities and racial slurs; the Jews who joined the march on this night provided new, poisonous opportunities for their insults.”

In the jail, the 17 rabbis gathered around Rabbi Eugene Borowitz who held the pen, listened to each of them, and he wrote: “We could not say no to Martin Luther King. … We came because we realized that injustice in St. Augustine, as anywhere else, diminishes the humanity is each of us.”

Al Vorspan, now 90, told The Jewish Week, “I fought in World War II, fought in a lot of battles, but the scariest thing I ever saw were the police and the mobs in St. Augustine, greeting us with chains and billy clubs. When they arrested us, they turned us over to a guy whose name I remember after all these years, [Halstead] Hoss Manucy.” Vorspan, one of the founders of the Reform movement’s Religious Action Center, and later senior vice president of the Union of American Hebrew Congregations, recalls, “We were taunted by this vicious anti-Semite. We were threatened with electric prods. We asked to be in the same cell as the black ministers who were arrested with us, and we were laughed at, and they pulled out the guns.”

Vorspan had been going down South from the time of the Montgomery bus boycott (1955-56). “The Jewish community that now hails us; the Jewish community back then wanted us to get the hell out of town. They were scared. Now they all have civil rights museums, and most of them are quite nice and genuine, and the Jewish communities plays a very large role in maintaining them.”

In 1964, Bond recalls that he and Dotty [Dorothy] Zellner, a Jewish woman from a (communist) “red diaper family” in New York, “were the communications department for SNCC.” Zellner, now 76, says, “I first went down South as a volunteer with SNCC [popularly pronounced ‘snick’] in the fall of ’61. I became a staff member in ’62. Jewish participation began to grow, particularly after the (1963) March on Washington. By 1964 maybe 10-15 percent of the SNCC staff was Jewish, but no one really knows how many volunteers were Jewish because we never asked on the application forms.”

That summer is often recalled as the glory days of the black-Jewish alliance, and yet the alliance was unraveling before Labor Day. At the Democratic National Convention (Aug. 24-27), there was political brawling between Freedom Summer’s Mississippi integrated delegation and the state’s “official” segregationist delegation. Zellner says, when the attempt to seat the Freedom Democrats essentially failed, as President Lyndon Johnson and important Democrats (including some Jews) opposed it, so as not to lose the South in November, some black leaders “felt they had been betrayed by their white allies and that it would be very difficult to sit and plan strategy with people they couldn’t trust anymore.” Two years later, in 1966, SNCC voted to ask all white workers to leave the organization.

Did that hurt Jews more because they were most of the whites? “Yes, I suppose,” says Zellner. “It was a very painful loss for me, not to be in SNCC after five years, but I do understand where they were coming from. I never heard an anti-Semitic word,” she says, but sometimes “goodbye” is the most hurtful word of all.

Vorspan heard things differently. “They didn’t have to disparage Jews with anti-Semitic canards.”

The convention fight was hardly the only fissure that Freedom Summer. Despite the passage of the landmark Civil Rights Act in July, and the martyrdom of Goodman, Schwerner and Chaney, there was a surge of black anti-Semitism, that some said was really anti-white. A survey in August by the New York World Telegram and Sun found that “there is a rising tide of resentment in Harlem and in other New York Negro areas, but it is more anti-white than anti-Jewish.” That Freedom Summer saw these headlines in the JTA news service: “500 Stores, Mostly Jewish, Looted and Damaged in Riots in Brooklyn” (July 23); “100 Jewish Stores Smashed, Looted, As Negroes Riot in Rochester, N.Y.” (July 27); and “Jewish Storekeepers in Philadelphia Lose Millions in Rioting” (Aug. 31).

By 1967, James Baldwin wrote in The New York Times, “Negroes Are Anti-Semitic Because They’re Anti-White.” Even when Jews donate money to civil rights, the novelist wrote, “this money can be looked on as conscience money merely, as money given to keep the Negro happy in his place, and out of white neighborhoods.” Rabbi Robert Gordis countered in the Times with an article headlined, “Negroes Are Anti-Semitic Because They Want A Scapegoat.”

When it came to black anti-Semitism, says Vorspan, “I didn’t minimize it all. I think they were sick and tired of Jewish participation, if not leadership.”

Looking back, says Vorspan, “I thought the black-Jewish coalition was a God-send. We were like brothers. We achieved immense change. The civil rights legislation, all the amendments, were drafted by black and Jewish lawyers at our [Reform] conference room table.” And then, like summer itself, the nights turned cool.