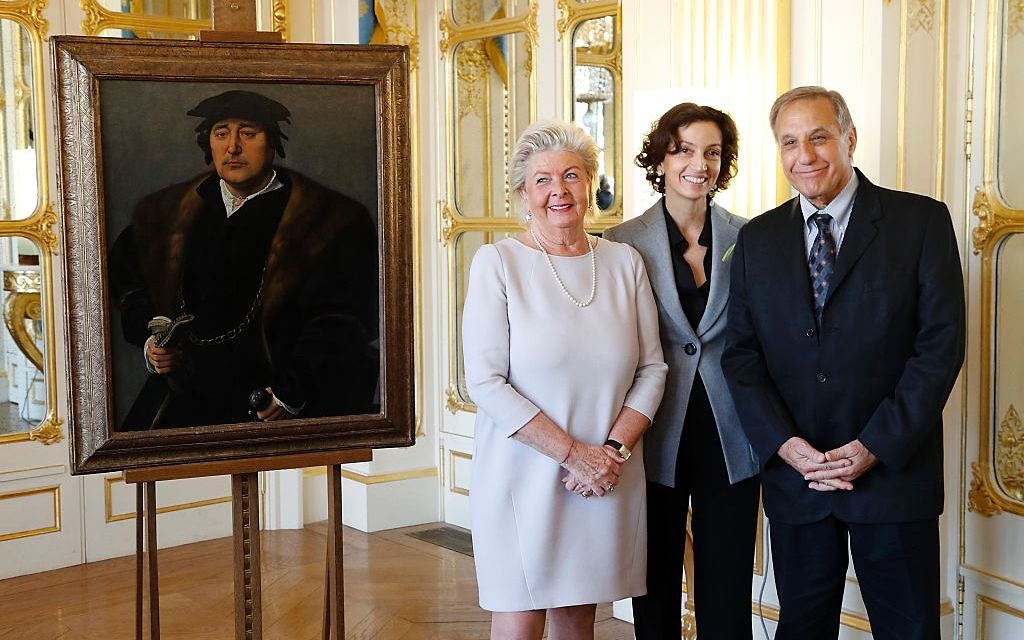 In a ceremony at the French Ministry of Culture in Paris last week, the French government returned a 16th-century Flemish painting to Henrietta Schubert and Christopher Bromberg, descendents of the painting’s original Jewish owners, the New York Times reported.

When German Jews Hertha and Henry Bromberg were fleeing Germany before World War II, they were forced to sell the 16th-century “Portrait of a Man,” in Paris. Though the exact artist isn’t known, it has been attributed to Joos van Cleve, or to his son, Cornelis van Cleve.

Since it was sold in 1938, the Flemish painting changed hands a number of times. Until recently it was held in a French museum while French authorities sought out its rightful owner.

Henrietta Schubert and Christopher Bromberg, the grandchildren of Hertha and Henry Bromberg, did not know about the painting’s existence until lawyers informed Schubert that they had found a painting that belonged to their family.

“You never expect something like this,” Schubert, 67, told the Washington Post. “The Nazis are dead, and this can help our wounds heal.”

While in the past, claimants had to come forward themselves, the French government has stepped up efforts in recent years to locate people like Schubert and Bromberg, actively seeking out the rightful owners of art that had been looted by the Nazis. This heightened effort has led to the return of many more works of art over the last few years, including the 19th-century drawing "Trois danseuses en buste" by Edgar Degas, which the Nazis looted in 1940. Earlier this year, it was returned to Viviane Dreyfus, the original owner’s daughter.

These efforts have been made possible by genealogists searching through archives to attempt to locate people who were persecuted by the Nazis. Reports show that of approximately 2,000 works of art that were deemed orphaned after initial post-World War II efforts and distributed among French museums, an estimated 107 have been returned in the last 65 years, with another 27 whose owners have been recently identified.

One such case was made famous in “Woman In Gold,” the 2015 movie starring Helen Mirren and Ryan Reynolds, which told the story of Maria Altmann's quest to reclaim five family-owned paintings stolen by the Nazis and in the hands of the Austrian Government. After a lengthy legal battle, Altmann was successful and one of the paintings, "Adele Bloch-Bauer I" is now on display at the Neue Galerie in New York City.