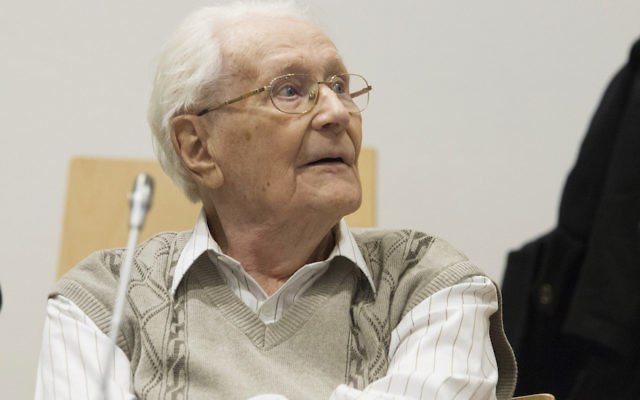 Oskar Groening, 93, arrives for the first day of his trial in Lueneburg, Germany, to face charges of being accomplice to the murder of 300,000 people at Auschwitz, April 21, 2015. (Andreas Tamme/Getty Images)

A 96-year-old former Auschwitz guard is fit to serve a prison sentence, according to prosecutors in the German state of Hanover.

Oskar Groening was convicted and sentenced in July 2015 to four years in jail for his role in the murder of 300,000 Hungarian Jews at the concentration camp in Poland. A federal appeals court rejected his appeal in November.

A date for Groening to enter prison has not yet been set. He has remained free for the appeal and the decision on his fitness for prison.

Groening had admitted to being tasked with gathering the money and valuables found in the baggage of murdered Jews and handing it over to his superiors for transfer to Berlin. He said he had guarded luggage on the Auschwitz arrival and selection ramp two or three times in the summer of 1944.

During the trial, Groening asked for forgiveness while acknowledging that only the courts could decide when it came to criminal guilt.

Groening was held in a British prison until 1948. He eventually found work as a payroll clerk in a factory.

The first investigations of Groening took place in 1977, but it was only after the conviction of Sobibor guard John Demjanjuk in 2011 that the courts were emboldened to try camp guards on charges of complicity in murder.