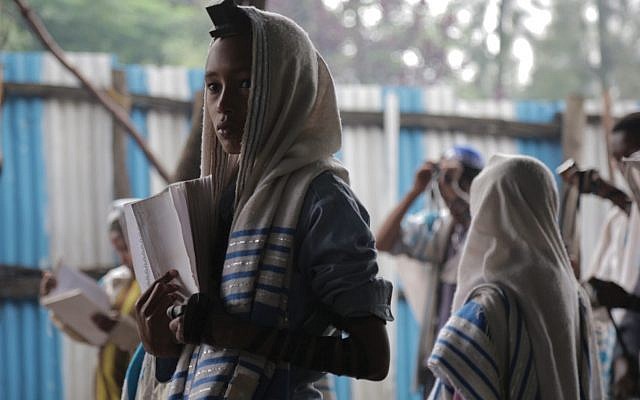 Those left behind: A scene from “The Passengers” shows Falash Mura in Ethiopia. Thepassengersfilm.com

In 2013, David Elcott and his wife Rabbi Shira Milgram flew to Ethiopia to witness the final aliyah of Ethiopian Jews. What they found instead was that not all of the Jews were able to leave. About 9,000 were left behind — they are believed to be the last Jews in the world awaiting aliyah.

The new documentary “The Passengers” depicts their struggle to immigrate to Israel. As one member of the community says, “Always, I dream of Israel.” The film focuses on the efforts of two young men in their 20s, best friends who are like brothers — who have never been out of Ethiopia. On a tour organized by Elcott, they travel around America to meet with Jewish communal leaders to bring attention to and advance the cause of their people — “and bring them home.”

Before they leave, the community elders tell them, “Please be our voice,” a command they don’t take lightly.

According to the film, there are now more than 140,000 Ethiopians living in Israel. Those who remain in Ethiopia are mostly part of the Falash Mura community, a group that largely converted to Christianity a few generations ago, and has since returned to Judaism. Among the Ethiopians in Israel now, some 50,000, according to activists, are Falash Mura. As is pointed out in the film, the Israeli government has been reaching out to Spanish citizens who are descendants of Marranos, or forced converts, to make aliyah, so there is precedent. All of the Ethiopian Jews have had to undergo a formal conversion in Israel.

In 2015, the Israeli government approved their admission to Israel, but reneged four months later, citing budgetary constraints. Since then, only a few have been allowed to make aliyah.

The visually stunning film opens in the compound in Gondar, where Jews live. They are first encountered in prayer, with men wearing prayer shawls, some in white robes, their prayer books in facing pages of Amharic and Hebrew. One of the young men, Gezahegn Derebe, known as Gezi, says about living in Ethiopia, “The place is temporary for us. We are just living as guests or as a passenger.”

His response inspires the title, as filmmaker Ryan Porush points out. “It’s a layered metaphor of Jews being in exodus, journeying, with a destination that’s hard to reach.”

Porush, who served as the film’s director, producer and the main cinematographer, went to Ethiopia in 2016 and flew to the U.S. with Derebe and Demoz Deboch. He says that the film raises issues about what it means to be Jewish.

A professor at NYU’s Wagner School of Public Service and longtime activist who formerly held leadership roles at Clal, the AJC and the Israel Policy, Elcott called on his contacts throughout the Jewish community. In the film, they meet with heads of Jewish organizations, federations, Hillel groups and others. When asked if he was disappointed that although the boys found sympathetic ears, no one stepped up to move their cause ahead in a significant way, he says, “I’m perplexed. Because the mantra of the Jewish community is ‘Never again.’”

Some in the film, including Knesset member Avraham Neguise, the Israeli parliament’s only Ethiopian member, accuse the Israeli government of racism. Elcott says that the problem is more a matter of “bureaucratic indolence” and points out that Israel has a progressive history of immigration, and that it has gone to great lengths to bring large numbers of Ethiopians to Israel. He says that he wants to hold Israel to commitments it has made.

At a time when there are protests in this country about families seeking asylum being separated at the border, the images of Ethiopians now in Israel holding up photos of family members left behind are striking.

Gezi says, “We have different skin color, but we have the same blood.”

By film’s end, Deboch is able to leave for Israel, and Porush films his homecoming with much emotion. Heartbreakingly, Derebe is left behind.

Elcott and Porush arranged a private screening of “The Passengers” for communal leaders this week at the Marlene Meyerson JCC Manhattan and plan to show it at film festivals and other venues. They see it as a call to action.