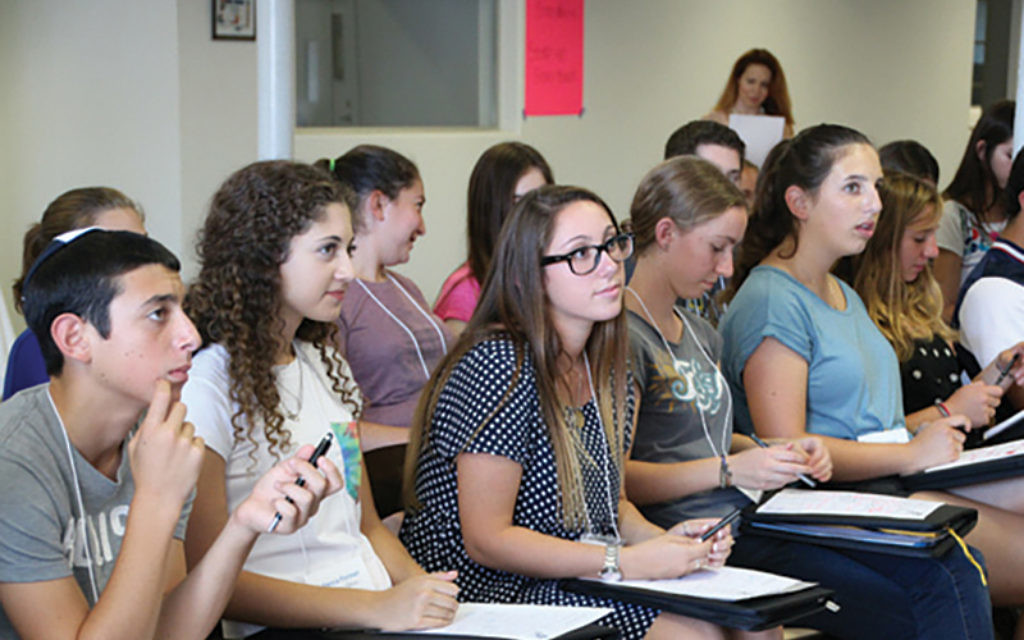 At age 18, Alec Waxman, an Orthodox Jewish teen from Riverdale, knows more about philanthropy than many adults.

A four-year participant in UJA-Federation of New York’s Teen Philanthropic Leadership Council (TPLC), an initiative to engage teens in the philanthropic process, giving has become one of his primary ways to connect with the community. As a TPLC senior fellow this past year, Waxman worked with a 20-member teen council to draft a mission statement, fundraise, pore over grant proposals and allocate over $10,000 to two different initiatives. (Collectively, the 141 teens participating in the program allocated $236,000 to 15 different charities during the 2015-2016 academic year.)

“UJA definitely tries to instill the value that if we don’t give to our own Jewish organizations, no one else will,” said Waxman. “I definitely see that as a priority.”

But among his fellow teen philanthropists, Waxman was often the odd one out when it came to giving “Jewishly” — donating to organizations that specifically serve Jews. Most of his peers advocated for giving to broader causes, he said. The teen council he advised ended up awarding its largest grant (nearly $17,000) to the Agahozo-Shalom Youth Village in Rwanda, a home for children who lost their parents during the Rwandan genocide.

Teens hold check for projects they funded. Courtesy of JTFN.

“A lot of teens think it’s not right, or even discriminatory, to give only to Jews,” said Waxman. While he personally feels this is a “misguided opinion” — “I was raised to feel a personal obligation as a Jew to help out other Jews first,” he said — he’s grown accustomed to being in the minority.

Michael Sharivker, a 16-year-old from Toronto, is more representative of the majority. As a Jewish teen philanthropist, he described “feeling the weight of global responsibility.” A member of the recently piloted Jewish Teen Board in Toronto, a project of the Jewish Teen Funders Network (JTFN), he has pushed for grants that give money to “people who are different than me.”

“Social media makes you hyper-aware of everything going on around you,” said Sharivker, who grew up in a Reform family with a strong ethic of tikkun olam.

“The mission was to help people who are different from ourselves,” said Sharivker. “That often means helping organizations with Jewish values, but our focus wasn’t necessarily the Jewish community.”

The changing perception of Jewishness among Gen-Z — those born in 1995 or after — and its ramifications for the growing world of teen philanthropy was a touchstone at the recent national Jewish Teen Philanthropy Summit hosted by JTFN, a nonprofit supporting Jewish teen philanthropy in North America. Teen councils usually get the money they donate either through fundraising, their sponsoring organization or a combination of the two.

Nearly 100 registrants from around the country, as well as a handful of international participants, joined in the two-day conference in Manhattan to discuss the field’s shifting challenges and strategies.

Many teens think giving only to Jewish organizations is 'descriminatory.' Courtesty of JTFN.

“What is attractive to teens today is to be countercultural,” said Sharon Schoenfeld, director of U.S. programs for Young Judaea, one of the oldest Zionist youth movements in America, which engages over 3,000 young people through Israel programs, summer camps and year-round programming. During her work in the teen philanthropy division, Schoenfeld noticed a pronounced trend towards giving to “universalist,” rather than “particularist,” causes.

“These teens are tapped into world events 24/7 through social media,” she said. “They’re globally minded. They want their giving to reach the broadest audience possible.” Even when giving to charities in Israel, teens have favored initiatives that cater to the country’s diverse population; this past year, teens awarded a grant to a charity that helps Sudanese refugees seeking asylum in Israel.

“There’s a sense that other things take priority over what’s going on in your own backyard,” said Waxman, who will be entering Duke University as a freshman in the fall. “As a New York Jew, Jewish infrastructure is so easily accessible that it’s something we take for granted.” (In the five years since UJA-Federation’s TPLC began, no teen council has included Jewish identity and renewal — defined by UJA-Federation as the commitment to Jewish education and identity development — in its mission statement, said Waxman. Instead, fighting global hunger, poverty and unemployment as well as aiding at-risk youth consistently take precedence.)

Brianna Holtzman, director of JTFN, said the summit this year was tailored to “enable teens as global change-makers.” A keynote panel on the first day featured Michaela Bethune, head of campaigns at DoSomething.org, one of the largest global organizations for young people interested in creating social change. With 5.3 million members in 130 countries, the organization encourages teens to mobilize quickly online to support causes they care about. The other panel member was Kaley Leshem, head of training at Crisis Text Line, a free texting hotline geared to help teens struggling with suicide and depression. Both panelists coached attendees on how to reach teens in “their own language” — mainly text and an array of the newest social media platforms (for teens, Facebook is out — Vine, Yik Yak and Snapchat are in).

“Teens are asking different questions today,” said Holtzman, who said the field of Jewish teen philanthropy has expanded rapidly in the past two years. Now with an international footprint, JTFN has teen councils operating in Australia and Israel. “‘What does universal giving mean? What does it mean to give to Jewish organizations, and how do I give Jewishly to secular organizations?’— these are the conversations we see happening.”

“Now more than ever, teens are viewing themselves as global citizens,” said Andrew Paull, senior regional director of BBYO Manhattan, a new and rapidly expanding branch of the national pluralistic youth movement (BBYO Manhattan, which opened two years ago, today engages 350 teens across eight chapters.) Even supporting Israel is “One piece of a larger global commitment,” he said.

Paull described how the teenagers he works with express a specific interest in the global refugee crisis. Recently, he helped a group of 20 teens Skype with a 19-year-old Iraqi refugee who had gone from Iraq to Syria, crossed into Turkey and now lives in Vienna.

“There’s a deep desire to connect to teens from different backgrounds,” said Paull.

Observations of field professionals are bolstered by the findings of a recent major report on Jewish teens conducted by the New York-based Jewish Education Project. The study, based on the views of 139 teens between the ages of 12 ½ and 17 from four cities — Atlanta, Boston, Denver and Los Angeles — found that while Jewish teenagers take deep pride in their Jewish identity, they refuse to view themselves as “special.”

“Teens are adamant that being Jewish does not mean they are superior in any way,” said David Bryfman, chief innovation officer at Jewish Education Project, a nonprofit that works with Jewish educators and clergy. “They largely resist the concept of Jews as the ‘chosen people.’”

This “unique-but-not-special” phenomenon, as described in the study, makes the question of “To whom am I responsible?” especially tricky for Jewish educators, said Bryfman during a conference session. The argument to support Jews, to the exclusion of non-Jews, is an increasingly difficult one to make, he said, a problem that poses serious challenges for the larger future of Jewish philanthropy.

“If a tragedy occurs, the tendency to point out Jewish victims is viewed by young people as borderline racist,” said Bryfman.

Samantha Hea, initiatives assistant at the Rose Youth Foundation in Denver, described how her cohort of 23 teen philanthropists took a dogged interest this past year in funding teen pregnancy prevention programs at local public schools that lacked resources; of the $60,000 the teen board was given by the foundation to allocate, they chose to award $45,000 to the Planned Parenthood of the Rocky Mountains. Her group was particularly interested in making sure sex-ed programs presented an inclusive message to students by acknowledging LGBT youth.

According to Hea, it was the first time the group chose to fund a project addressing this issue.

“Teen pregnancy, contraceptives, inclusive sex education — these are pressing issues for teens today,” said Hea, who said members of the group discussed the issue of rape culture on college campuses, a recently trending topic in the news. “They are attuned to conversations and concerns affecting their generation — they want to help other teens like them.

In recent years, high profile Jewish philanthropists, including Facebook founder Mark Zuckerberg and “Lean-In” author Sheryl Sandberg, have faced some criticism for not giving back to their “own,” but rather making major multimillion- (and billion-) dollar giving pledges to address larger global issues, including poverty, disease and lack of education.

Sharivker said it is role models like Zuckerberg who are making an imprint on the teenage psyche. “Taking care of the world means moving beyond just ourselves and our community — it’s about thinking big, even if we start small.”