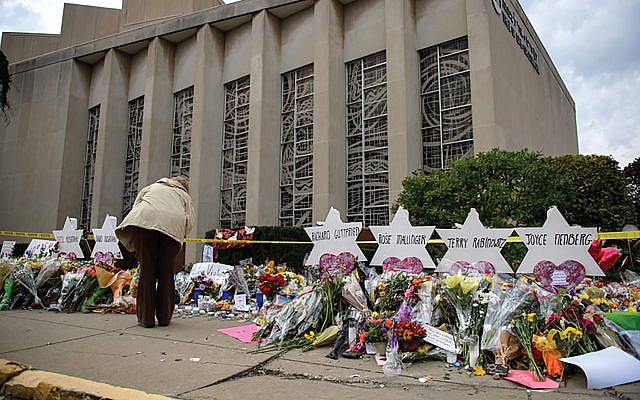 The synagogue I go to, a historic building in Brooklyn, is beautiful but a bit dilapidated. The paint is peeling, the pews are cracked, there’s patches of mold on the ceiling and broken tiles in the social hall. The doors, though — they’re in excellent shape. Somebody donated them a few years back, and they’re strong, metal, fire-rated doors. And every Saturday morning, someone unlocks them, flings them open and props a weight to keep them that way for the rest of Shabbat services. They’re like open wings on the building’s façade — welcoming, encompassing, protective.

A synagogue is a refuge — historically it has been, anyway. It’s also, of course, a target, and has been for as long as it’s been a refuge. What happened at the Tree of Life synagogue in Pittsburgh is nothing new to Jews. But it is new to Jews in America, and it’s certainly new to me. In my community last week, we engaged in a debate that’s been wrenching and that’s going to change the essential experience of entering our synagogue, and that might change the essential experience of prayer. And it’s all about the doors.

Abraham, our biblical forefather, is identified with his hospitality. The chuppah, the Jewish wedding canopy, is compared to his house, because it was a structure open on all four sides. Abraham not only didn’t close his doors; he didn’t have any.

In Europe, most synagogues have layers of doors protecting their buildings, and armed guards vetting everyone who walks in. If you’re not a regular, you can’t just come to shul — you won’t get in if you don’t submit your passport ahead of time. You show up as a threat, and you’re downgraded from there. By the time you get in, it can be hard to feel welcome, regardless of how good the intentions are.

In Israel, the situation is different. The security consultant for our synagogue who is helping us put together an alarm system is Israeli, and he’s been telling me the biggest security problem we have is that we don’t keep our doors shut and locked. To him, none of what I’m talking about here is worth discussing. To him, screening strangers and locking doors is the most basic of basic steps. When I finally told him this week that we’re ready to implement his recommendations and lock the doors, his response was, “Good, and next we have to talk about guns.”

In discussing security in my community, the dividing line seems to be between those who have lived in Israel and those who haven’t. Those who have react to my ambivalence with incredulity, even anger. To them, the danger is present and clear, and it’s no time to be waffling about how a synagogue “feels.” Our security consultant has taken an air of detached bemusement with me. He’s content to wait until events shift things around and I’m forced to face the new facts on the ground. Today, we’re finally closing our doors. Later, if and when another horrific news cycle hits, I’ll be back on the phone to him, saying “OK, now we’re ready for your next recommendation.” To him, the change is inevitable.

So the question of us keeping our doors open or closed isn’t just about how welcoming we are as a sacred space. It’s also a question of what sort of society we live in here in America, and what sort of society we’re becoming. Years ago, I believed America would never devolve into the jagged hostility that Israelis live with every day, that the people who wanted to lock our doors were laughably paranoid, that our doors would never be closed on Shabbat. Now I’m helping to implement the change I thought would never happen.

I still have convictions. Not only do I not want a gun in my synagogue, I wouldn’t walk into it if there was. That’s not the shul I want to go to, and not the America I want to live in. That’s my conviction. Today.

Both forms of prayer are valid, and crucial, and depend on where we are in our life. Jews through the ages have turned to God in desperation — whether they’ve huddled terrified in a deli in Paris, a ghetto in Warsaw or an anonymous pit in the land of Canaan. In our lifetimes, American Jews of a certain generation have been privileged to come to prayer from a place of confidence and security. That could be changing. Of course the reality is that most of this is more about perception than reality. The reality is that the danger of walking into a shul is far lower than the danger of getting into a car.

The difference is, of course, that the Jews who died in Pittsburgh didn’t just die; they were murdered, out of hate, and now people in our community are terrified, as am I. And locking our doors has a very real impact on our security — it makes us safer from the unlikely event of an attack by orders of magnitude. So we’re doing it. Security is necessary. But it doesn’t need to oppress us.

Or so I hope. To our security consultant, this is but the first step. For me, I continue to pray from a place of optimism — though the wings of our synagogue are folded shut — that our society can heal from the rifts that divide it, that this coming Sabbath, and all that follow, may be a Shabbat shalom, a Sabbath of peace.

Lawrence Horwitz is a trustee of Congregation Kol Israel in Brooklyn. The views expressed here are his own and not those of the synagogue.