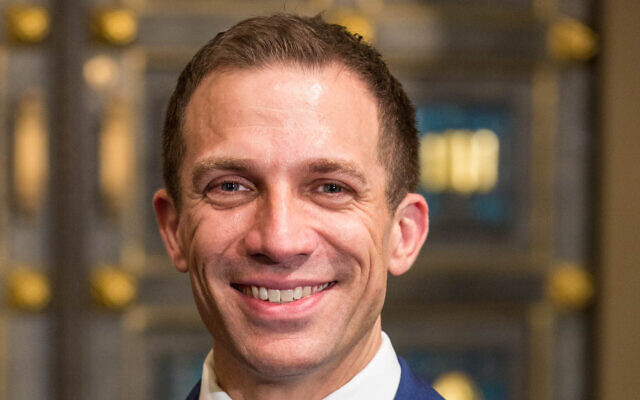 Congregation Rodeph Sholom is a symbol of continuity and change. One of the oldest Jewish congregations in New York City, it started out Orthodox,  switched to a Conservative service, and for over a century has been Reform.

“I have always been searching for my place of belonging. I do feel I have found it here,” Rabbi Spratt told The Jewish Week in an interview in his synagogue office. “I have found people who look at the world similarly for me to know that I am not alone and people who look at things differently and challenge me to grow. Holding those two things in the same breath is where the real magic happens.”

Rabbi Spratt, 42, has served at the Reform synagogue in various capacities since 2001, when he was a Hebrew school teacher before entering rabbinical school, and most recently as senior associate rabbi.

He succeeds Rabbi Robert Levine, who recently retired and was named rabbi emeritus.

The synagogue, now on West 83rd Street off of Central Park West, was founded in 1842 on the Lower East Side as an Orthodox congregation. Their charter emphasized “the immediate need to organize to worship, to visit the sick, to help new immigrants and educate the young.” In 1844, Rabbi Leo Merzbacher, the founding rabbi, left the congregation, insisting women shouldn’t have to wear sheitels, or traditional wigs.

The congregation moved physically three times, from Attorney Street to Clinton Street on the Lower East Side (1850) and then Lexington and 63rd Street in 1891 and to their present location in 1930; they also moved spiritually, from Orthodoxy to a Conservative service (1875) to Reform (1901). In 1970, they made history, establishing the first Reform day school in the United States. 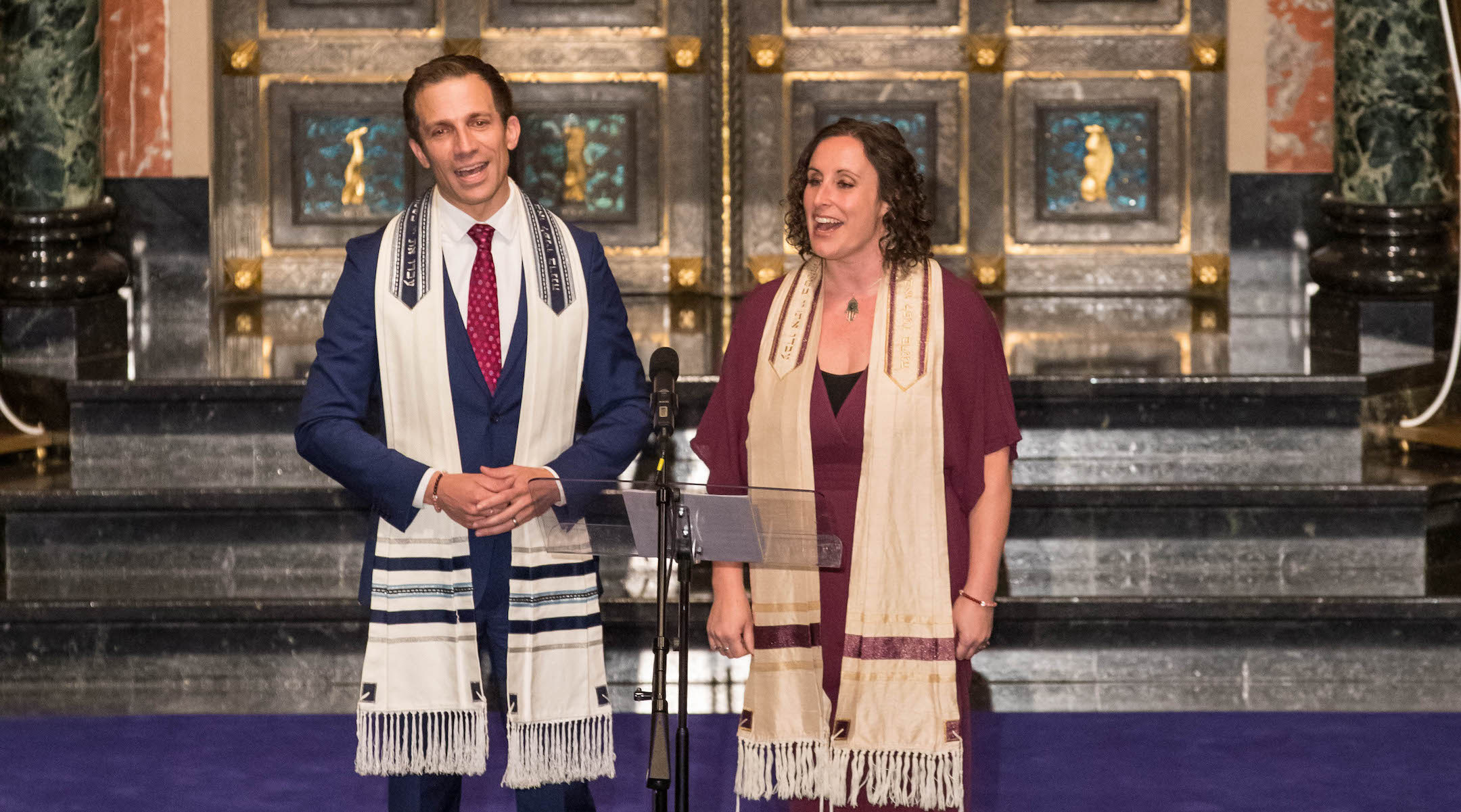 While teaching in Utah, his Canadian-born Jewish mother met his father, who was raised in the Church of Jesus Christ of Latter-day Saints but who had already left the Mormon fold. Upon their marriage, his mother’s parents, who had become Orthodox and moved to Israel, disowned her. His family moved to Eugene, Oregon, where they were involved with a Renewal synagogue, which later affiliated with the Reconstructionist movement. They were embraced by the Mormon relatives, who respected their different religious path.

He had no contact with the Jewish side of his family until he was about seven and met his maternal grandmother. When he was 12 and studying for his bar mitzvah — after his father had converted to Judaism — he traveled to Israel and was then embraced by his family there. His grandfather set him up with tutors, and Spratt fell in love with the community, began praying three times a day and decided he wanted to return to Israel.

For the next few summers, Spratt studied in Efrat at a kollel, or full-time Jewish study program, connected to Yeshivat Hamivtar and run by Rabbi Shlomo Riskin.

“I was completely immersed in Israel and the Orthodox world. I decided that I would be baal teshuva [newly Orthodox] and started wearing a black hat and black suit – I was the only one dressed like that in Eugene, Oregon. It was an interesting collision of worlds,” he said.

He would walk five miles to their Reconstructionist synagogue on Shabbat, before joining others who had founded an Orthodox minyan. He remembers living in two worlds, supported in his choices by his family.

From a young age, however, he had an aptitude for science and started to feel that not all of his questions on Jewish topics were answered by his teachers with equal rigor and expansiveness.

“It unraveled a bit for me, as I wanted a Judaism that helped me integrate with the larger world, not one that set me further apart. So much of my Jewish identity was about embracing otherness and I wanted to find a different approach.”

He didn’t fall out of love with Judaism, just discovered new layers and deeper meanings.

At the University of Oregon, he studied psychology and religion. While he was drawn to a career in genetic engineering or biochemistry – “I wanted to unlock what is at the essence of humanity” – he sought something less solitary than working in a lab. He drove cross country to New York City in a used car, sold it to pay a few months’ rent and looked for a job while he would figure out his next steps. Always, he was seeking to belong. 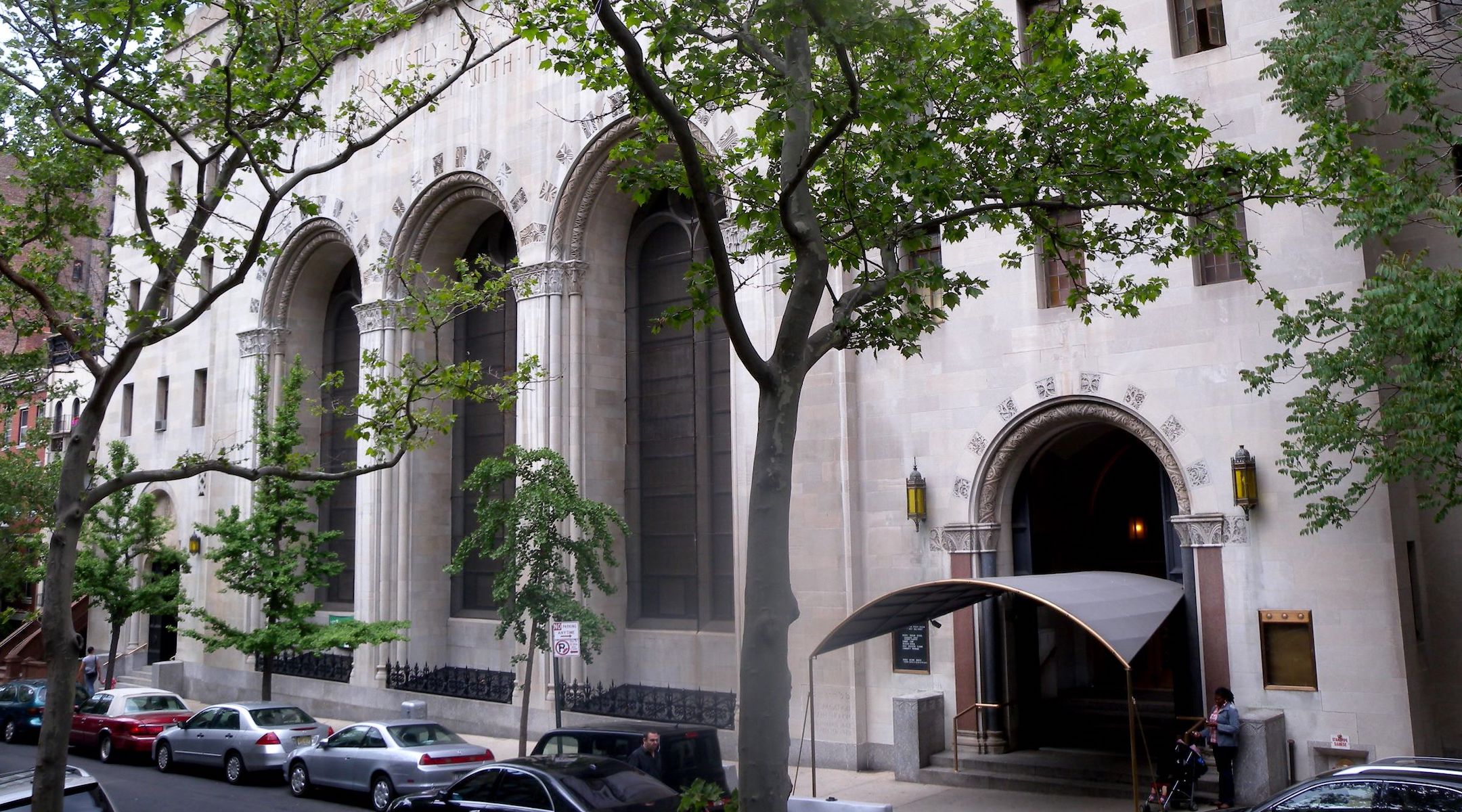 Congregation Rodeph Sholom moved to its current location on West 83rd Street off of Central Park West in 1930. (Wikipedia)

He looked into teaching at synagogues, as he had done while in college, and was hired by Rodeph Sholom. He then enrolled in rabbinical school at The Jewish Theological Seminary, drawn by the faculty and their openness to his line of questions and the idea of a multi-faceted tradition. He graduated with a concentration in Jewish philosophy, receiving awards and prizes in Talmud, philosophy, homiletics and Bible.

Spratt recounts that early on while teaching at CRS, Rabbi Levine “took me under his wing.” It was the beginning of a decades-long partnership in learning and deep friendship. Rodeph Sholom offered the young JTS student a position as rabbinic intern,  which was highly unusual for JTS, Rodeph Sholom and Hebrew Union College, the Reform seminary. When he was ordained at JTS, Rodeph Sholom created a new position for him as the rabbi in residence of the Rodeph Sholom School and associate rabbi of CRS.

Now, Rabbi Spratt is fully aligned with the Reform movement.

“Perhaps it’s the bias from my science background – I feel you need to learn, to explore, to be exposed to many different questions and then it’s up to you,” he said. “Some of my practices might look like practices from different movements, but why I do things is not that a rabbi told me to do so, or that it’s an expression of halacha, but that I’ve come to my own decision.”

His unusual background inspires an understanding of people who come to the synagogue seeking belonging and connectedness, as he did. He says that while he now has a position that is front and center, he is also comfortable with those who stand in the back, as he once did.

“One of the most rampant plagues is solitude,” he said. “We have a lot of people who feel unseen, unneeded, unnecessary, which I think is a real loss.”

He is open to people of all backgrounds, and remains connected to his Mormon relatives, many of whom recently joined in the celebration of his daughter’s bat mitzvah.

CRS President Peter Ehrenberg, an attorney who has been a member for more than 25 years, explained that there was no formal search process to find Rabbi Levine’s successor.

“We knew what we had. We didn’t need to look further – we had a gem,” he said. “Ben is the right person for this job.”

“When you mention his name, people light up. He has a way of reaching people, making connections.”

Among the projects Rabbi Spratt has spearheaded at CRS are Shireinu (Our Songs), the acclaimed prayer service designed for those with special needs.

“This is not something exceptional but is fundamental to what we mean as Jewish community,” he said, quoting Isaiah: “Let My house of prayer be a house of prayer for all people.”

When you mention his name, people light up. He has a way of reaching people, making connections.

In partnership with Cantor Shayna De Lowe, he also created Minyan, an initiative of small groups of congregants, linked by shared affinities and led by trained leaders, with ongoing clergy support.

“We are reclaiming the term for prayer quorum – the idea is 10 people creating the sacred together,” he said. “This is a different permutation from the small groups established by the havurah movement, where each group developed on its own. We are intentionally trying to spark it from the center.”

When asked if there is a Jewish thinker who particularly inspires him, he names Rabbi Kalonymus Kalman Shapira, Grand Rabbi of Piaseczno, Poland, also known as the Piaseczner, or the rabbi of the Warsaw Ghetto.

“He was writing at a time of unimaginable darkness, and named both the despair and the hope in a brilliant textual analysis. He’s a person of intellectual rigor and profound psychological depth. I go back to him again and again.”

Rabbi Spratt lives in Riverdale with his wife, Cantor Micah Morgovsky, who serves at Temple Sinai in Stamford, Connecticut, and their two kids. Every day, he is up at 5:00 am when he exercises and engages in a daily meditation practice. Still connected to his Oregon roots, he loves the outdoors and enjoys photography — “something about trying to take a world in motion and capture a single image of it that can reflect something.”

The membership of CRS includes about 1,700 households. Some trace their lineage back to the Lower East Side, some have joined during COVID and have not yet experienced in-person events. Among their members are Jews and non-Jews, and Rabbi Spratt welcomes all.

Right now, the congregation is embarking, for the first time in its history, in a strategic planning process.

“This is an opportunity to think about not just where we have been, but about how we might amplify our efforts and think about a next chapter,” he said.

Rabbi Spratt speaks about the future of CRS and of American Judaism with optimism.

“I believe we are in the midst of an awakening, as our Jewish structures and organizations shift to meet the evolving needs of America. At a time of deep social and political division, our religious narratives and responsibilities and spiritual practices may hold a pathway forward,” he said.

“As Americans bring greater focus to the well-being of body, mind and soul, Judaism offers a wellspring of tools to help us flourish, lifting ancient practice to meet modern needs.”