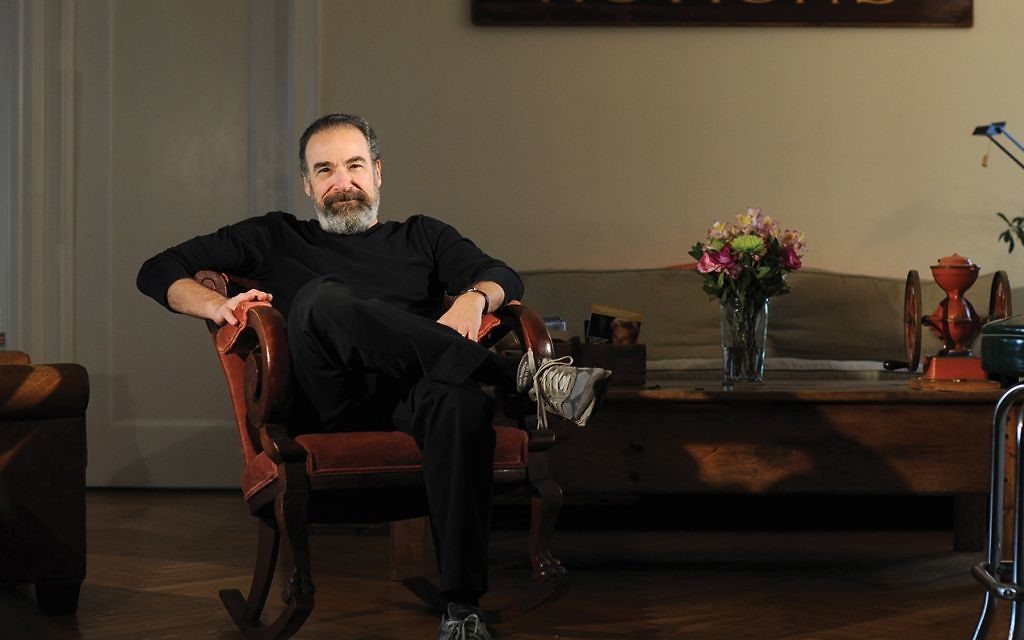 On the set of “Homeland,” Mandy Patinkin softly sings Yiddish lullabies before the cameras roll.

These days, whether he’s performing live in concert or recording television, he runs through the lyrics of “Mamaloshen,” his 1998 collection of Yiddish songs, as a warm-up. “It focuses my mind,” he says. “The foreign-language tongue twisters engage my brain.”

The first time that Patinkin sang in Yiddish was in the mid-1980s when his friend Joseph Papp was honored by YIVO, and Papp asked him to learn “Yosl, Yosl.” (That’s Joseph in Yiddish.)

“It hit me in the kishkes,” he tells The Jewish Week. “Nothing else I have sang has had that effect, an effect I can’t explain — a mysterious thing — like when you meet someone and you have to see them again and again.”

Patinkin will be presenting some of those songs and other American standards in concert on May 23 at Lincoln Center’s Rose Theater, at the National Yiddish Theatre Folksbiene’s Gala, honoring Zalmen and Debra Mlotek (7:30 p.m., [212] 213-2120, nytf.org). It was Zalmen Mlotek, artistic director of NYTF, along with his parents, Chana and Yosl Mlotek and others, who mentored Patinkin in Yiddish.

“They gave me one of the best gifts of my life,” the Tony- and Emmy Award-winning actor says.

“They are giants in fighting the climate change of language. The glaciers of Yiddish are melting, and they keep it alive in ways that are very moving to me.”

The songs he likes most are those that tell stories. Patinkin agrees with others’ description that he is a lyric-driven person. He credits songwriters as gifted geniuses. “I’m the guy who delivers their mail.”

When asked if he had interest in performing in “Fiddler on the Roof,” he declines, saying that he played Tevye in a Hebrew production at Camp Sura, in Buchanan, Mich., in the summer of 1967 when he was 15. And he reprised the role, this time in English, at the University of Kansas when he was 17. His father died the following year. That performance was the last time his father saw him on stage.

While he heard Yiddish growing up, he didn’t learn it until he was an adult. He recalls his grandfather’s frequent refrain, “Dos redele dreyt zikh” (The wheel is always turning), as important to his own worldview. He says his grandfather treated people on the top and the bottom — of the wheel — just the same, with great kindness.

An activist for many causes, he is recently back from missions to Cambodia with American Jewish World Service and Lesbos, Greece, with the International Rescue Committee, where he spent time with newly arrived refugees.

Patinkin connects his humanitarian work to his Judaism. “The word is rachmones, compassion. This work is a privilege of my life, to be able to give a voice to those who don’t have one, to work for human rights.”

On the desk of Saul Berenson — the CIA operative he plays in Showtime’s “Homeland” — he placed the Talmudic dictum that reads, in part, “Whoever saves a life, it is as if he saved an entire world.”

Patinkin, who has starred in many films, is about to film “The Spanish Queen” with Penelope Cruz, along with the sixth season of “Homeland.”

Every day, whether in prayers or meditation, he says the Shema and recites the names of loved ones who have passed away. “It’s almost like a song, I say their names, and it gives me great comfort.” He also prays for Jerusalem, as “a metaphor for everything and everyone I care about, for all of humanity.”

I mention that he’s beginning to sound like a rabbi.

“I ain’t no rabbi; these ideas are all in the songs I sing. The songs reignite me. We’re all looking for the same things, whether Sondheim or Shakespeare, or guys like me. We all have one thing — we’re trying to turn darkness into light.”