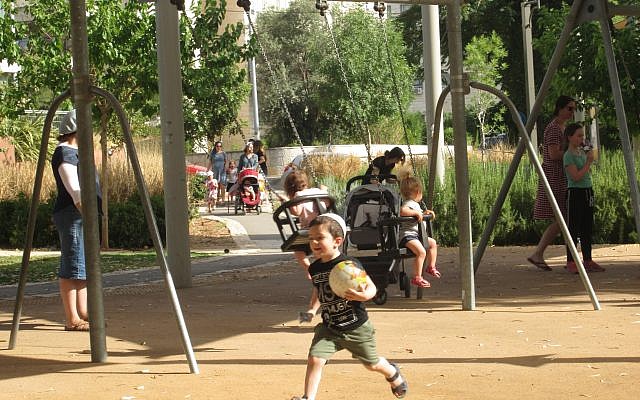 Due to the measles outbreak in Israel, outdoor playgrounds are one of the few places Israeli parents feel safe bringing their young children. Michele Chabin/JW

Jerusalem — When the measles outbreak in Israel began to make the nightly news late last year, Sarah Novick, whose son was 5 months old at the time, called her pediatrician for advice.

He advised her and other parents to keep their too-young-to-be vaccinated babies away from enclosed public spaces and unvaccinated people.

For Novick, “this basically meant no malls, supermarkets, no public transport, no shul, no play groups, no Gymboree. Nada,” she told The Jewish Week.

With no family in Israel, Novick and her husband rarely left the house together because one parent always needed to stay home with the baby.

The outbreak has also had “huge financial implications” for the couple, Novick said.

“Without a car, we’ve had to take taxis and hire babysitters,” she said. “What should have been a lovely time to take our baby to baby programs and to bask in the glory and wonder of new parenthood became a stressful, lonely nightmare.”

While no agency is keeping track of the non-physical toll the measles outbreak is taking on people, businesses and relationships, anecdotal evidence suggests that the toll is high, The Jewish Week has learned. 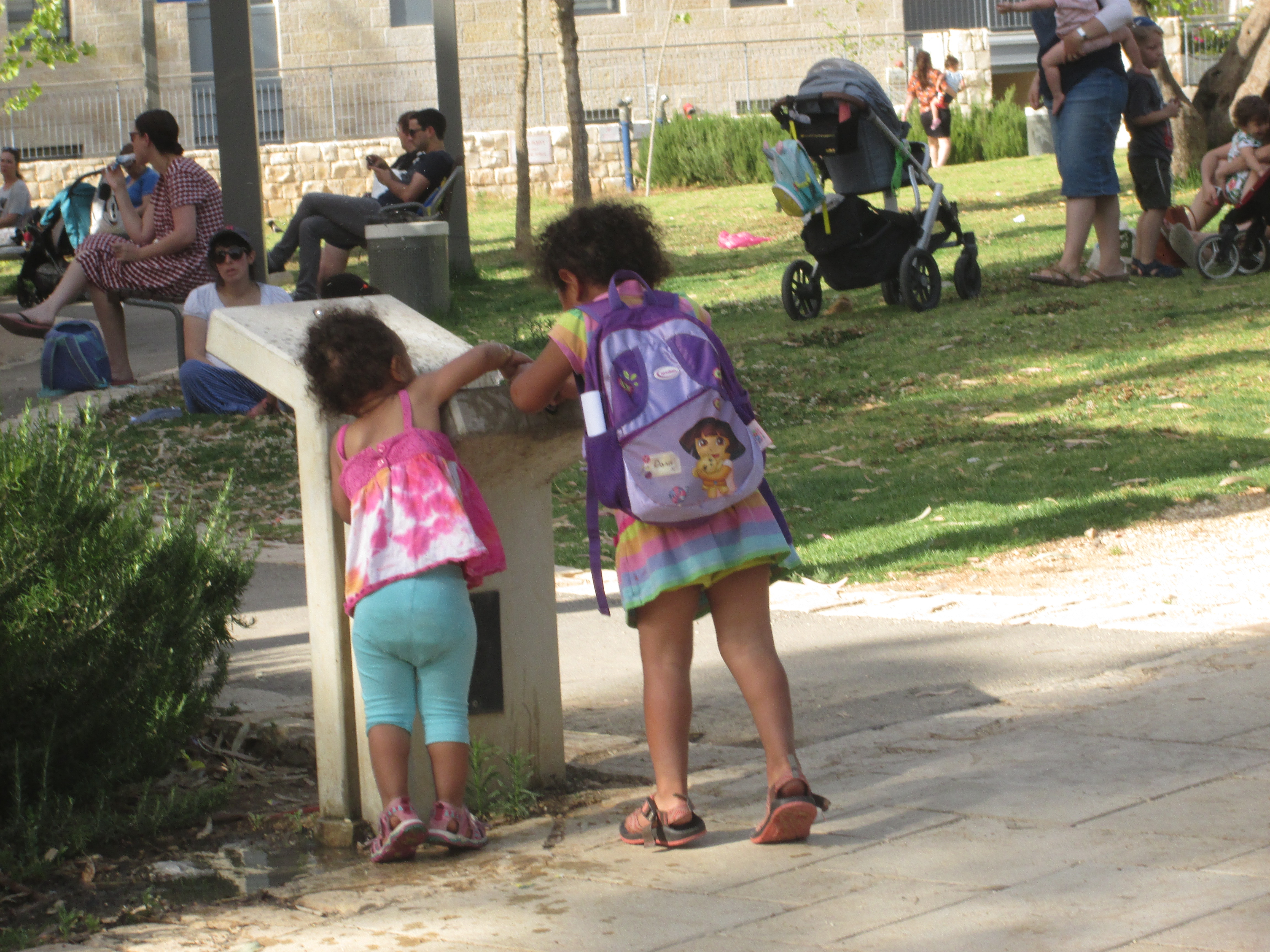 Due to the measles outbreak in Israel, outdoor playgrounds are one of the few places Israeli parents feel safe bringing their young children. (Michele Chabin)

Parents of infants are avoiding shopping malls, or at least bringing only their older vaccinated children. Some are extending maternity leave so they don’t have to place their babies in a child-care setting. There are 4,100 confirmed cases in Israel, which is believed to be the source of the current outbreak in charedi communities in the U.S.

The outbreak “has affected a good friendship,” said Karen Barnett, the mother of a 5-month-old. “I won’t let my baby socialize with my friend’s unvaccinated kids until she’s had her MMRV [mumps, measles, rubella, chicken pox] vaccine, which is usually given around a child’s first birthday but can be given a few months earlier and then repeated when the baby turns a year old.

“It’s understandably causing a lot of friction between us,”

Sydney Krispin, who is pregnant, decided not to fly to the U.S. for her cousin’s wedding, which will take place three months after her due date.

“We decided not to go because [the baby] won’t be old enough to get the MMR vaccine. I’m also concerned about going out with him in crowded, indoor, public areas.”

Her oldest child is 2 and has received one of the two shots necessary for maximum immunity. “I’m also concerned for her but less so since she’s mainly protected,” Krispin said.

Some parents The Jewish Week interviewed spoke on condition of anonymity due to fears they will be belittled by family and friends who don’t share their measles concerns.

“Due to the outbreak I’ve postponed trying to get pregnant but haven’t told anyone because I didn’t want to be talked out of my decision,” one young woman confided.

Parents of small babies are under even more stress.

One woman who requested anonymity said she and her husband rent a car every time they need to take their baby to a place not within walking distance, instead of taking a bus, and it’s taken a financial toll.

When her baby is ill or needs a checkup, the couple will not take him to a pediatrician whose office is in a crowded HMO building. (Israel’s universal health care is provided by four HMOs.)

“We searched for a pediatrician in a private office so there’s a lesser chance of being exposed,” the woman said before noting that there was a case of measles reported at a local HMO office a few weeks ago.

The one time they had to visit the HMO, she stayed outdoors with the baby while her husband waited inside for their turn.

Like many Israeli parents worried about the measles outbreak, she misses the social benefits of hanging out with other parents and babies.

“I’d love to go to some sort of mommy-and-me class, but we were advised by a pediatrician to avoid other children, if possible. Sometimes I feel like I can’t go anywhere besides a walk to the park with the baby,” she said.

She also misses her family back in the U.S.

“We haven’t made travel plans yet for this reason either. We are olim with no family nearby, so virtually nobody has been able to see our baby.”

She said she has missed happy events overseas, including a bris and an engagement party because she felt it would be unsafe to travel with her baby.

Even some of her pro-vaxx friends believe she and her husband have gone too far. Others understand the desire to take every precaution. Some of their older relatives wonder what all the fuss is about because they had measles as children.

“We’re nervous when we tell people about the precautions that we take because they might say something negative to us, give us unwanted parenting advice, or come after us because they end up being anti-vaxx.” 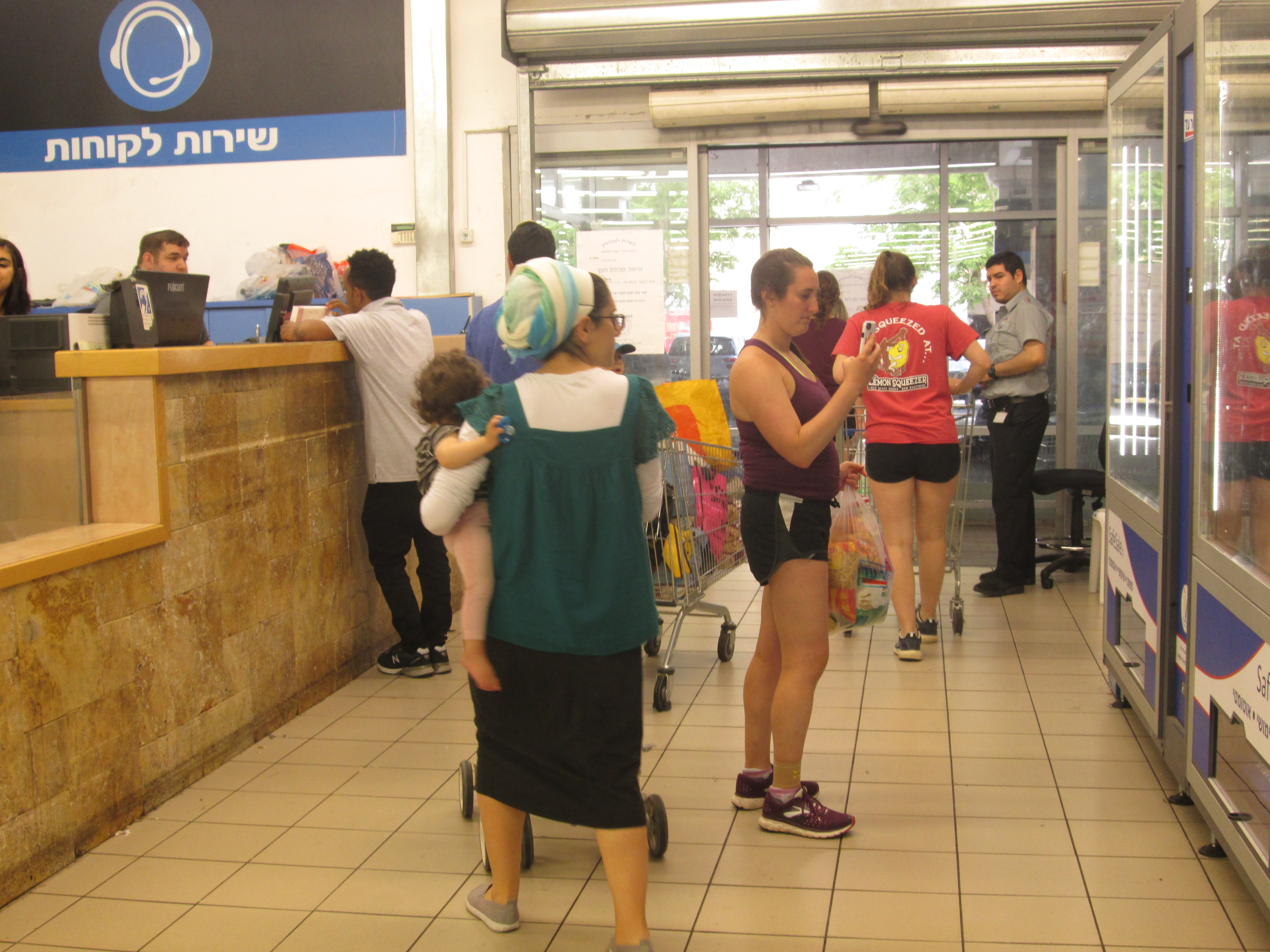 One of the few babies spotted at a Jerusalem supermarket. Many parents are keeping their as-yet-unvaccianted babies at home due to the measles outbreak in Israel. (Michele Chabin)

Another Israeli mother who requested anonymity said she asked American cousins who are anti-vaxxers to not bring their children to her daughter’s U.S-based bat mitzvah. She also pulled her children out of camp after she learned that almost all the children there were unvaccinated.

“I had a friend who’s on chemo also attending and a grandmother who’s 93 years old. So we really wanted to avoid any unnecessary unpleasant situations,” the mother explained. “Having to…deal with aggressive criticism from my anti-vaxxer friends and family was just hurtful and depressing.”

Liat, an Israeli who lives in New York City, said many in her community have decided not to travel on El Al after a flight attendant contracted the measles and slipped into a coma.

Whenever possible, she said, they choose to fly on Shabbat because many charedi Jews “will only fly El Al and will never [fly] on Shabbat.”

This despite the fact that more than a few of the Israelis and others who have contracted measles are not ultra-Orthodox, and that the vaccination rate in most charedi communities is high thanks to rabbinical support and aggressive public health campaigns.

The initial outbreak in the U.S. was likely transmitted by Israeli chasidic pilgrims who visited Ukraine to pray at the burial site of the revered chasidic Rabbi Nachman of Breslov. Ukraine has had nearly 70,000 cases since 2017, according to the New York Times. And tens of thousands of unvaccinated Europeans in other countries have also come down with the virus and pose an even bigger threat.

Back in Israel, many adults are concerned that they could contract the measles. According to the Ministry of Health, up to 2 million adults are in need of a booster shot.

Others are vulnerable due to illness.

“I have chronic cancer and I worry when I go to ultra-Orthodox neighborhoods and am in crowds of kids,” said Lauren Adilev. “I was vaccinated as a kid, but after chemo, who knows where my immune system is?”

Novick, whose baby received the MMRV vaccine when he was a year old, said she is still reeling from the experience of trying to avoid infection.

“With regard to how I feel about anti-vaxxers, I have so much anger from being in semi-quarantine for seven months. I believe that they should be treated like we would treat drunk drivers — with scorn and disdain and even, when they infect others, with prosecution,” Novick said.