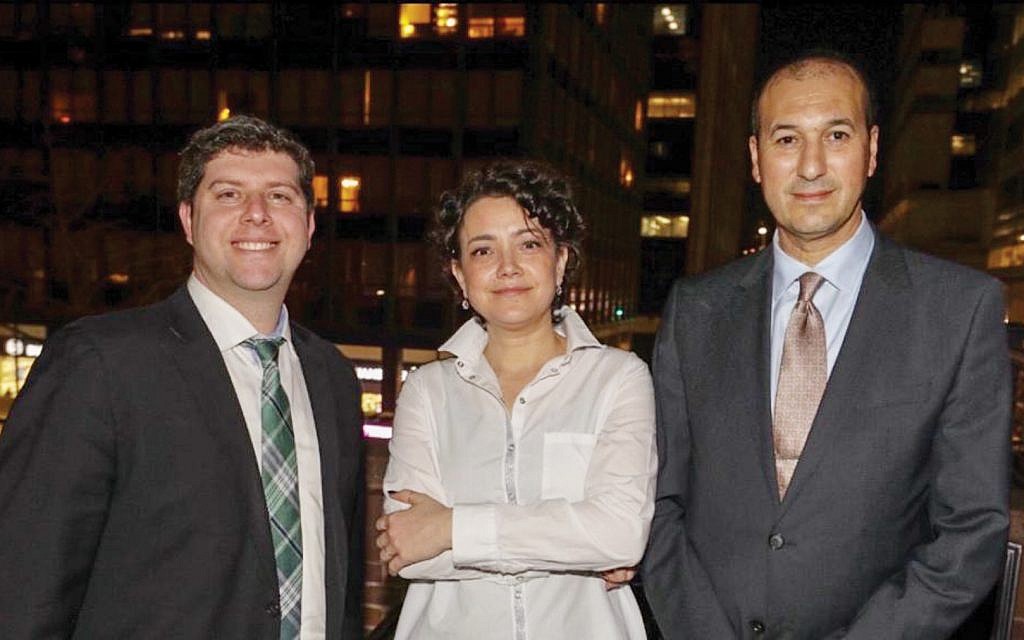 A Jew, a Muslim and a Christian walk into a restaurant … and take up their positions in the front of the house, in the kitchen and in the back office.

That’s what you’ll find at the Wall Street Grill, a new upscale kosher eatery in the heart of Manhattan’s financial district that opened in March. The spot’s eclectic menu — introducing the likes of Thai coconut curry soup to an audience accustomed to the standard chicken noodle — is mirrored by the multicultural trio behind the operation. 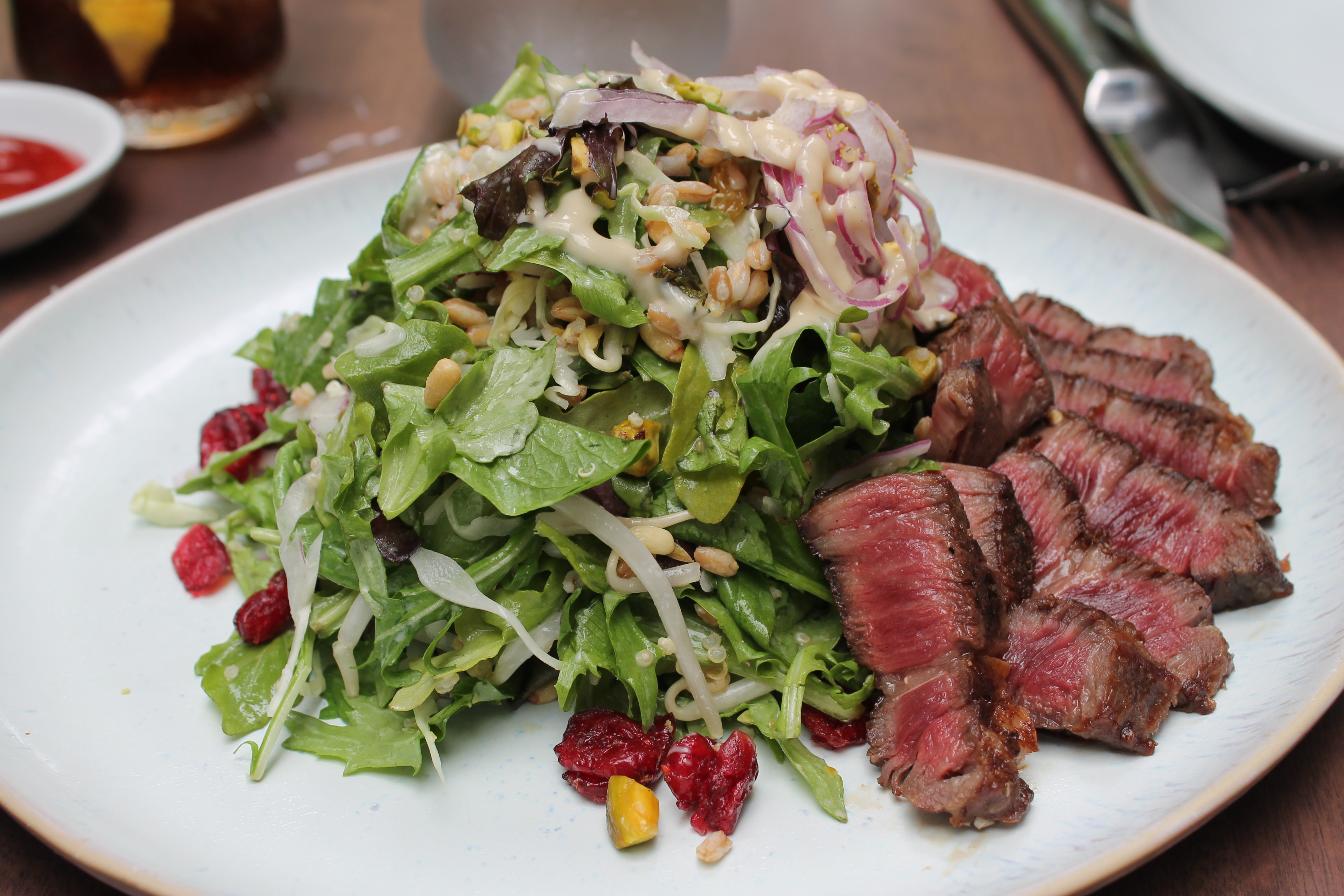 Tarik Ghadouani, a Moroccan Muslim and a veteran in the world of fine dining, is the face of the new eatery as the maître d’; Ines Kincaid, a German Christian, brings European foodie sensibilities to her role as general manager; and Steven Traube, an Ashkenazi Jewish Brooklynite, holds the ecumenical project together as the director of operations. 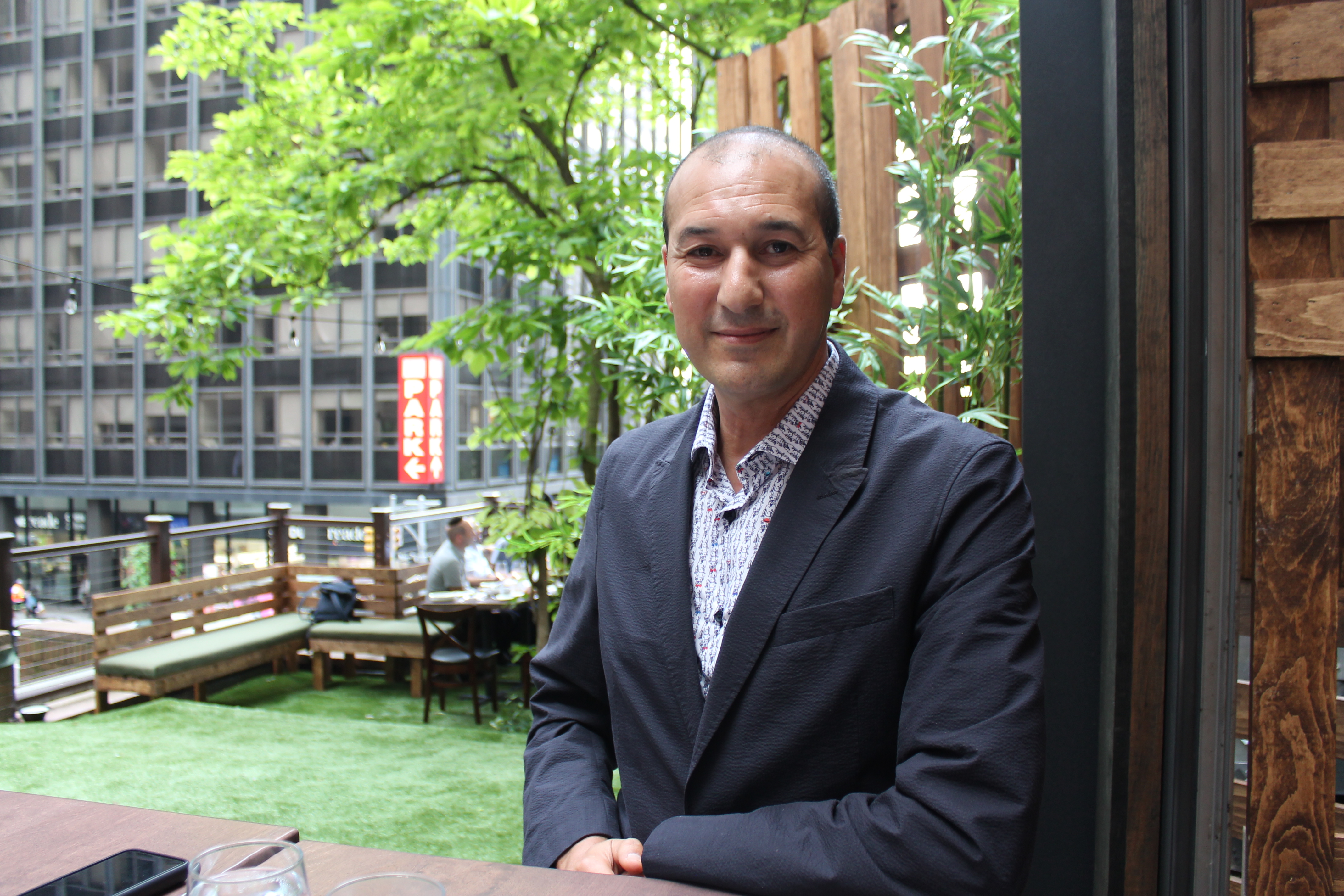 Tarik Ghadouani, a Moroccan Muslim, is the face of the new eatery as the maître d. Courtesy of Sam Reinstein

The restaurant’s eclectic crew is rounded off by a South American pastry chef, a third-generation Japanese sushi chef, and an Italian executive chef.

The three partners — who banter like siblings — are seeking to educate the kosher consumer about tastes and flavors likely new to their palates.

“We didn’t want to present the same old,” said Traube, who described growing bored with the same selection of kosher entrees on every menu — roast beef, chopped liver, roast chicken. “We wanted to offer a different perspective on what kosher food could be.”

And so the menu includes miso-glazed Chilean sea bass, crispy Arancini in a celery root and red wine sauce and torched white wine-poached pear. With dishes like those, Wall Street Grill joins a growing number of upscale kosher dining options in the city, such as the UN Plaza Grill and Alenbi in Crown Heights. 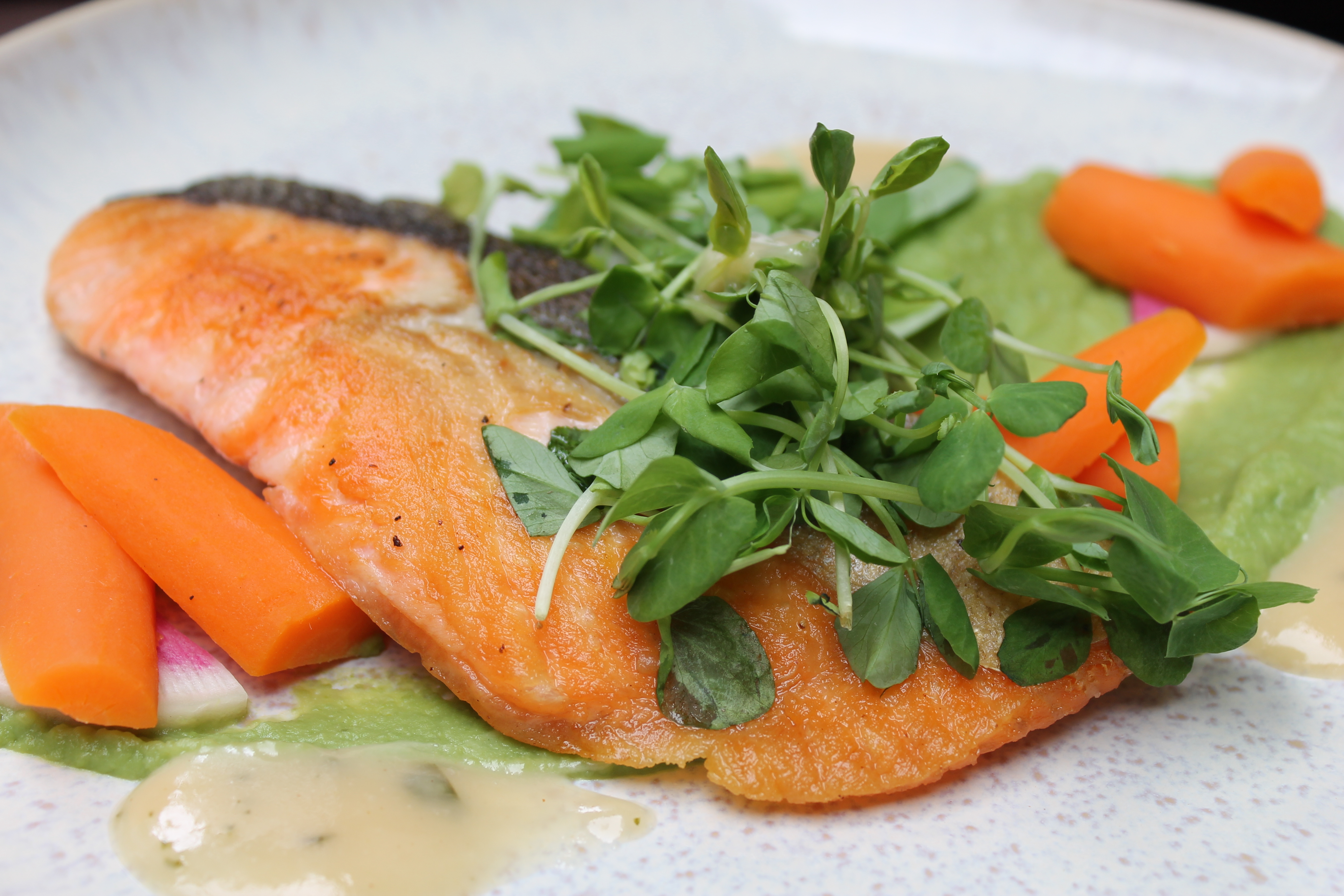 “Tarik and I are always exploring the broader New York food scene,” said Kincaid, who said the limitations of kosher dining — no milk and meat, limited seafood options, etc. — pose a welcome challenge. “We scout out what is new and hot, bring back ideas and translate it for a kosher market.”

For example: the burger is served with a mushroom duxelle sauce to imitate a creamy cheese sauce Kincaid fell in love with. Growing up in Germany, she learned that “food is not just to fill your stomach — it should be an experience.”

Not to say that encouraging kosher customers to take risks is easy, said executive chef Joseph Paulino, who previously worked at high-end non-kosher steakhouses. (He was also a competitor on Season 3 of Bravo’s “Top Chef.”) Paulino, who was excited to introduce his fourth-generation Italian gnocchi recipe to the kosher market, wasn’t prepared for the baffled response. 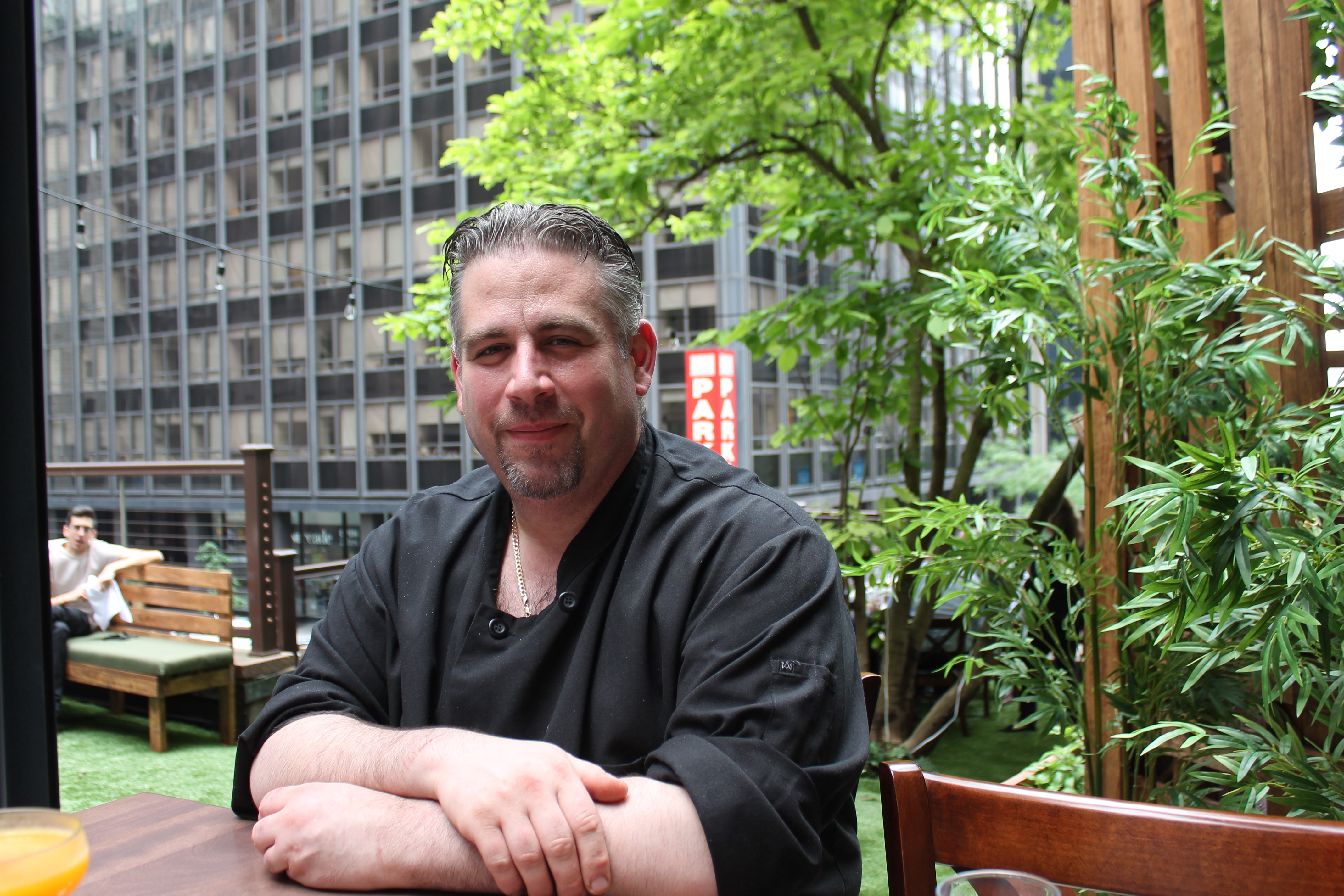 “Customers were like, ‘This is gnocchi? But they’re so fluffy!’” he said. The dense, frozen gnocchi in popular kosher supermarkets miseducated kosher consumers about what the food “is supposed to be about,” said Paulino. Now, the gnocchi is a big seller.

The tension between innovation and tradition — the latter a powerful pull in the Jewish food circles — came to a head over whether to serve chicken soup, said Traube. Ghadouani and Kincaid were at first “strongly opposed.”

“We were trying to bring something new, something fresh. So chicken soup? No. That’s what everyone expects at a kosher restaurant,” said Kincaid. But Traube felt it was important, amid so many unfamiliar menu options, to keep the beloved kosher staple. “We wanted to innovate, but we have to give our customers some stable ground.” 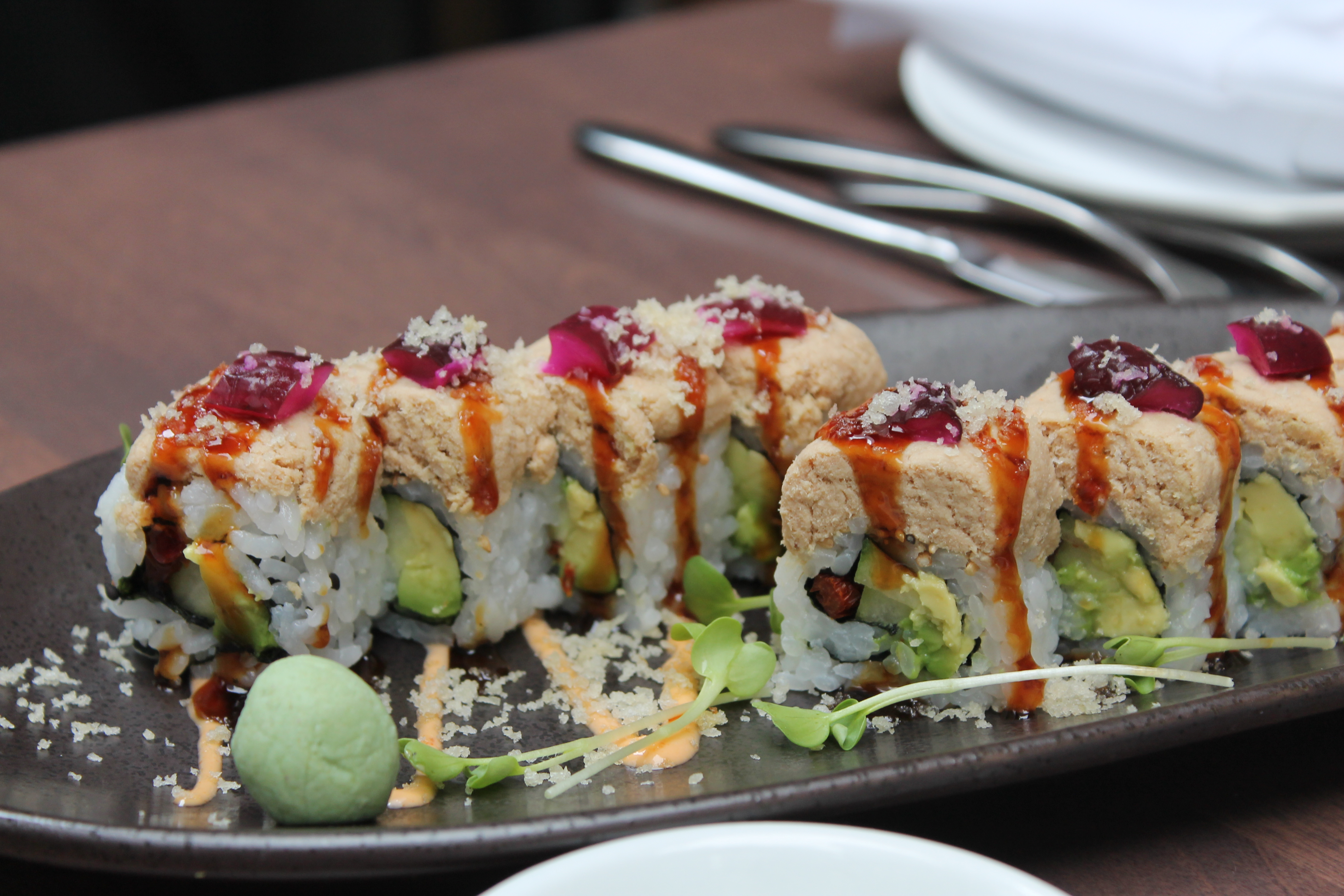 In the spirit of interfaith cooperation, the three struck a compromise: chicken soup was in, but with some unconventional flavor twists, such as lemon and dill, to punch up the flavor.

Not one to eat her words, Kincaid admits keeping the chicken soup was the right move. While Traube was looking away, she said, “I eat a bowl every day.”