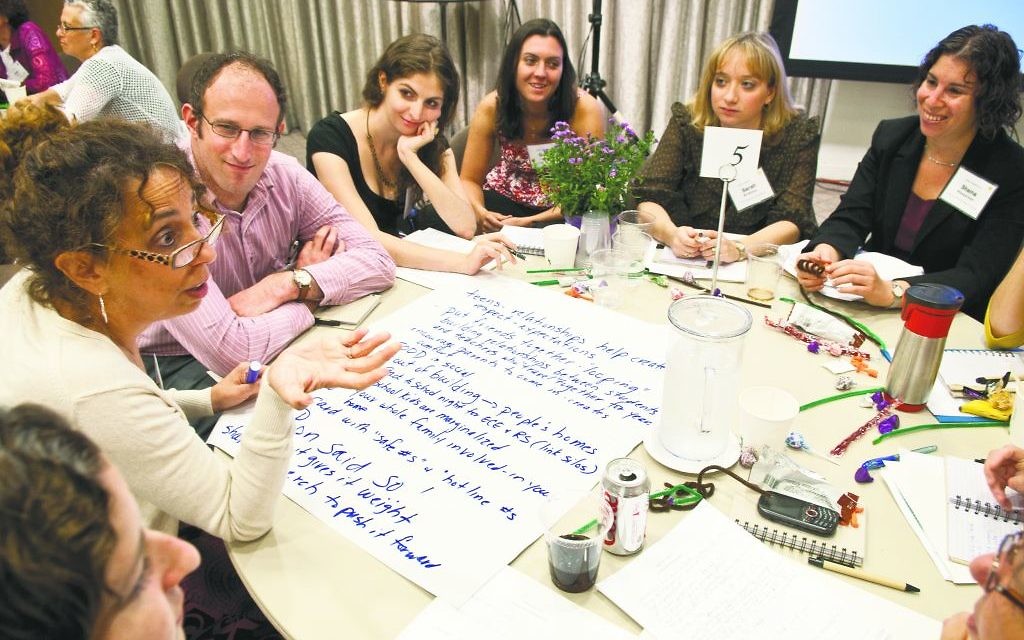 Two decades ago, in the aftermath of the 1991 National Jewish Population Survey best known for its findings of higher-than-ever intermarriage rates, the buzzword of American Jewish organization life was “continuity.”

Today, amid financial constraints and declining affiliation rates, virtually every national Jewish institution, and many local ones, is in the process of restructuring, redefining its mission, merging or even closing. And the jargon has flipped 180 degrees from the continuity talk of the ‘90s, with “transition” and “change” on seemingly everyone’s lips.

In the latest sign of the times, this week the board of the Jewish Education Service of North America (JESNA) — which has downsized dramatically in the past four years — announced it is considering merging with the Jewish Education Project, a New York organization that is itself the product of a 2010 merger.

A week earlier, leaders of the Partnership for Effective Learning and Innovative Education (PELIE), a five-year-old national group that promotes innovations in congregational schools and other “complementary” education, decided to put the project on “pause” for the next few months.

PELIE, which launched with eight funding partners but now has just two, will continue funding existing projects, but is closing its office — in space subleased from JESNA — and laying off most of its small staff. Its executive director, Jane Slotin, will stay until June. Ricky Schechtel and Carol Auerbach, the organization’s primary funders and lay leaders, told The Jewish Week the move is entirely unrelated to changes at JESNA, and that it in no way represents a diminished commitment to support complementary education. Rather, Auerbach said, it is an effort to “take a look and see where we can have the greatest impact as we move forward.”

Other recent institutional changes include:

♦ Education departments have been gutted as the national arms of the Reform and Reconstructionist movements have replaced longtime staff with consultants. Last spring, the Union for Reform Judaism laid off more than 30 professionals, including its director for lifelong learning. In June, when the Jewish Reconstructionist Federation was absorbed into the Reconstructionist Rabbinical College, the education department was eliminated. Meanwhile, the United Synagogue of Conservative Judaism is $5.7 million in debt, according to a recent audit, but its leaders are nonetheless implementing a strategic plan, one that includes a new “paradigm” for education.

♦ JECEI, a program seeking to improve Jewish preschools closed its doors in 2011. Launched by the Steinhardt Foundation for Jewish Life in 2005, the program was unable to recruit enough additional funders to sustain it financially.

♦ The Partnership for Excellence in Jewish Education, which supports day schools, now has an annual budget of $3.2 million, down from $6.3 million in fiscal year 2009. The group recently restructured its governance and mission, shifting from grant-making to “capacity-building.” In addition, whereas each day school network once held its own conference, centrist/Modern Orthodox, pluralistic, Conservative and Reform day schools have, since 2010, joined forces on one collective confab.

♦ In 2009 the Coalition for the Advancement of Jewish Education, known for its large annual professional development and networking conferences, filed for bankruptcy. (NewCAJE, a smaller, volunteer-run version of that group, has taken over some of its functions.)

And many observers contend that much of the change occurring now is healthy, with more innovation and collaboration, greater efficiencies and fewer turf battles, than in past decades.

Nonetheless, it’s a “very messy period, a very disruptive period,” observes Diane Troderman, who has served on the board of a variety of national Jewish organizations, including JESNA, PELIE and the Hebrew Charter School Center and who, together with her husband Harold Grinspoon, funds the PJ Library.

The recession, and a tendency of most donors to favor local organizations over national ones, has taken a toll on many national institutions and projects.

PELIE’s Auerbach and Schechtel noted that many of their original funding partners have narrowed their missions to supporting only local efforts. While they have advanced several projects in recent years — including running regional technology conferences in partnership with the Avi Chai Foundation and helping schools develop assessment tools — a major challenge, they said, has been figuring out how to get ideas that have flourished in one community to take root elsewhere — and to get communities to take a systemic approach to improving education, rather than just looking at single factors like teacher training or curriculum.

JESNA’s decision to approach the Jewish Education Project comes as the New York-focused group has been growing in influence and increasingly taking on national projects.

Asked to explain JESNA’s recent downsizing (its budget and staff have halved in size in the past four years, and in August it limited its focus to Hebrew school innovations), the Jewish Education Project’s CEO, Bob Sherman, who also serves on JESNA’s board, said, “I think part of it is that a lot of other organizations have come into existence over the last 20-30 years, each of which has a more targeted, specialized approach.”

JESNA, he added, “was sort of like the national central agency for Jewish education, but we’re no longer a centralized world.”

JESNA’s reputation has been weak in recent years, note some observers, with several who did not want to be identified criticizing the organization for being too focused on abstract “big ideas” rather than providing practical resources or facilitating networks among people working in the field.

“Most people lost faith with JESNA a long time ago,” said one Jewish education professional who participated in the Congregational Education Change Initiative that JESNA spearheaded a few years ago, something critics say did not lead to anything substantive. “We need a central organization to be looking at the big picture but also moving the field forward to keep pace with the level of crisis, upheaval and challenge right now, and they weren’t doing that,” the professional continued.

In recent years, some of that central coordinating role — convening professionals from all over the country, commissioning research, sharing best practices — has been filled by large foundations, like the San Francisco-based Jim Joseph Foundation and the New York-based Avi Chai Foundation, which are increasingly sharing information publicly, conducting and publishing studies, promoting collaborations and seeking partnerships. Jim Joseph recently established a consortium bringing together Jewish education researchers and practicioners.

Jonathan Woocher, the top professional at JESNA, noted that the current changes at his organization are “driven in part by a world in which people want to see direct value for money they spend” and “don’t want to sustain bureaucracies.”

Indeed, money has been hard to come by lately. It hasn’t helped matters that the Jewish Federations of North America, JESNA’s largest-single donor, is itself struggling to prove its worth.

The federations’ National Federation/Agency Alliance, which allocates money to eight other national agencies besides JESNA, including the Jewish Community Centers Association of North America and the Foundation for Jewish Culture, saw its funding pool shrink from $7.7 million in 2006, when it allocated approximately $1 million to JESNA, to just over $4 million this year, of which JESNA got $563,000.

Nonetheless, Woocher insists that the downsizing and restructuring is not just about money.

“The financial piece is only half the story,” he said. “And it’s the less important half.”

“Even if we had not had the financial crunch, we would have continued to focus our energies more and more around innovation and change, because of other things taking place in Jewish life,” he said. “The kind of multipurpose national service agency model that was in existence when JESNA was created in 1981 isn’t as relevant as it once was.”

In announcing the decision to pursue a merger, JESNA’s Board Chair Cass Gottlieb said her group has “developed a growing partnership with the Jewish Education Project, exemplified in initiatives like the Jewish Futures Conferences, DigitalJLearning, and work together on connecting educational innovators and established institutions. We have discovered that we share a vision for the future of Jewish life and learning and that our professional staffs respect one another and work together well. Given the similarity and scope of the missions that both agencies have set for themselves and the need to make maximally effective and efficient use of human, intellectual and financial resources, we believe that it makes sense to try to take our existing partnership to the next level …”