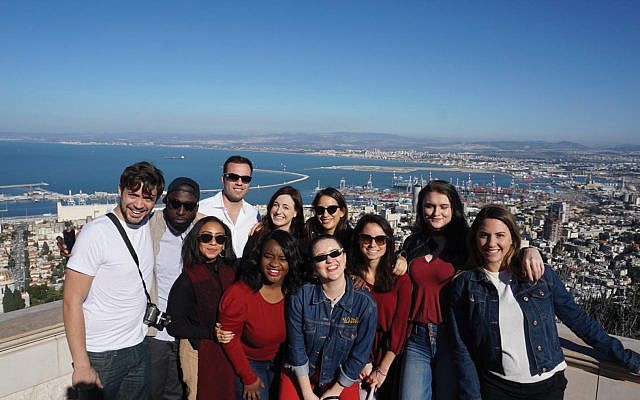 High on Haifa: Journalists’ group gets an Israel education. Courtesy of Israeli Consulate

It wasn’t the Israel they expected. Not by a long shot.

“A lot of narrative about Israel gets lost in war,” said David Grasso, anchor and media director for BoldTV, a digital publication aimed at millennials. “But Israel has a vibrant tech scene and other stories that are lost because the ongoing war in Gaza and the settlements often takes oxygen out of the room.”

For Kate Friedman-Siegel, who runs the popular Instagram account @CrazyJewishMom, “It’s crucial for people to have a real understanding of what’s happening” in Israel. “You have to go,” she said.

Grasso and Friedman-Siegel, two of the eight New York-based millennials with journalism credentials or social media influence, are reflecting on a free, eight-day trip to Israel in March sponsored by the Israeli consulate here.

The trip was part of a high-wire act called “Israel hasbara” — trying to put Israel’s best face forward yet not engaging in propaganda.

“I wanted to make them understand that Israel is not perfect,” said Almog Elijis, spokesperson and media affairs consul in New York, and the trip’s organizer. “We are a democracy. I want people to see the complexities.”

The itinerary included more than floating in the Dead Sea and clubbing in Tel Aviv. Participants went to the Gaza border; spoke to Knesset members; met Bahij Mansur, the mayor of Osafiya, a predominantly Druze community; and had lunch with Tal Shalev, a leading political journalist in Israel.

Elijis, herself a millennial, said that she did not want this delegation to be like Birthright, which has come under fire recently for presenting a biased view of Israel to Jews from other countries.

“I wanted them to see many sides,” she said. “Many sides and not both sides, because it is not black and white.”

Both Grasso and Friedman-Siegel said the trip was useful and eye-opening. Grasso emphasized that it was important to see the domestic issues in Israel, and see it as its own country, not just a part of a conflict.

“Millennials are early in their career, so a trip like this has a lasting impact,” he said.

Grasso covers entrepreneurship on the BoldTV Facebook page, and was introduced to many Israeli entrepreneurs while in the country.

Friedman-Siegel thinks being on the ground is important for journalists. “It’s really rational that they would want to bring journalists there; we were all impacted by the things we saw.”

Those who went had different takeaways and developed new perspectives on the country, and not only on matters of politics.

“It would be a mistake to treat Israeli food as a monolith,” said Hancock. “In my time on the trip, my favorite meal was a collection of breads and meats and spreads from a trip the group made to the Druze village of Osafiya. We also spent an entire night travelling to three of Tel Aviv’s countless vegan restaurants. I’ve also seen calzones with feta next to piles of hummus. So it’s hard to make a conclusion on what it even means for foods to be Israeli.”

Friedman-Siegel found discussions about being a working mother with the other women on the trip, and with a female Israeli entrepreneur they met, eye-opening. The American group learned that “having it all” was not an issue for Israeli women, who benefit from better paid leave policies.

A visit to a SodaStream factory, she added, “was really inspiring. It gave me a little bit of hope to see Arabs, Christians and Jews all working side by side.”

The trip created bonds among group members as well. None of them knew each other before the trip, but many have remained in touch since. They have had Shabbat dinner at Friedman-Siegel’s home and maintain an active group chat.