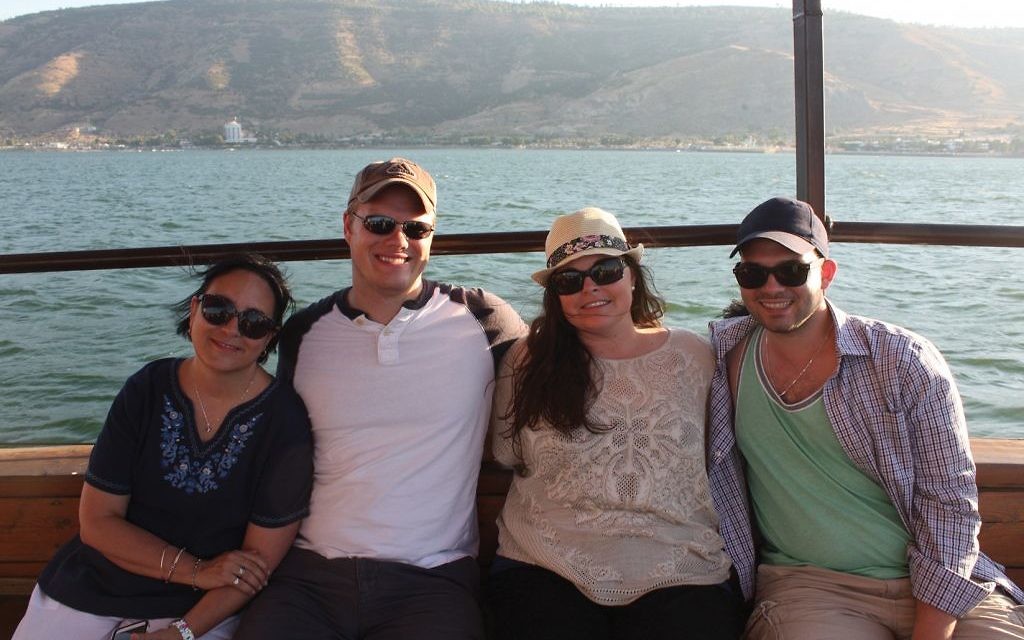 Joseph Madonna, a teacher at a Catholic high school in New Rochelle, was in the El Al security line at JFK last summer, along with nearly 20 other Catholic educators on their way to Israel for the first time … when suddenly they weren’t on their way at all.

An official of the Anti-Defamation League, which has sponsored the teachers’ educational trip as part of the 19-year-old ecumenical Bearing Witness program, pulled the teachers out of line.

Hamas terrorists had just fired rockets from Gaza, one landing near Israel’s Ben-Gurion Airport. The war between Israel and Hamas was underway. The trip was off; there might be danger for the mission participants, and some of their planned travel might have to be curtailed, ADL’s national director, Abraham Foxman, had ruled.

“I was disappointed,” Madonna said. He has a long-standing interest in comparative religion, and had been looking forward to seeing Israel.

This summer, he got to see Israel.

He and the other Bearing Witness teachers who had been set to go in 2014 recently returned from an intensive visit. They met with religious and political leaders, encountered Jews and Christians and Muslims, and toured Jewish and Catholic holy sites.

The teachers, all of whom work in middle schools and high schools, were part of Bearing Witness Advanced, an offshoot of the wider Bearing Witness program in which a total of some 1,900 men and women have participated; BWA offers the travel opportunity to about a quarter of the 80 educators who annually spend a year in Bearing Witness activities, which are endorsed by the U.S. Conference of Catholic Bishops.

BWA, in the spirit of the Vatican II declarations of the 1960s that improved Jewish-Catholic relations, is designed to teach about Jewish theology, anti-Semitism that grew out of earlier Church teachings, life in Israel, and “the relationship between Jesus and the Jewish community from which he came against the backdrop of ancient Jewish and Christian sites.”

No such ADL program for Protestant or Muslim teachers is offered yet. Neither faith has an “analog” to the Catholics’ nationwide parochial school system, said David Waren, ADL director of education, who accompanied the recent mission.

The focus of Bearing Witness, he said, is “to ensure that the next generation of Catholics,” born decades after Vatican II and its Nostre Aetate declaration on Jewish-Catholic relations, is studied and understood. An orientation session of a few days precedes the Israeli trip, and the teachers receive a few background books to read about life in Israel; back in the States, most remain active in ADL interfaith follow-up activities.

Waren estimates that the teachers who have taken part in Bearing Witness over the years have had the potential to reach “hundreds of thousands … [possibly] a couple of millions” of students.

By offering the program to teachers who deal with teens, BWA reaches students who are beginning to develop wider interests and have the sophistication to understand what they learn, Waren said.

Most of the participating educators teach such subjects as history, theology and English.

Before visiting Israel, he said, he had “limited exposure” to Jewish thought. He ex-

pected the country “to be a lot more tense.”

In Israel, Madonna said, he learned lessons he will be able to apply in his classes. “I learned the diversity of Israeli society.” And he learned that Israel is not a tense place. He was not scared being there. “Six hundred yards from the Syrian border [in the Golan Heights] I wasn’t scared at all.”

Another participant in the recent mission, Katie Contois, who teaches global history and psychology at St. Jean Baptiste High School in Manhattan, said she, after seeing Yad Vashem and learning about the Holocaust at other venues in Israel, will teach more about genocide this year. “I will be able to speak about it more confidently … in a more developed way.”

Her favorite part of Israel?

“As a Christian, it was wonderful to spend time in the Sea of Galilee area.”

Other participants in this year’s BWA program said they gained a valuable perspective.

“We have been inspired to be proactive, to be a disciple and educate not only our students but all those we encounter,” one teacher wrote to the ADL. “We are the peacemakers mentioned in the [New Testament’s] Beatitudes.”

Fr. Dennis Tamburello, a professor of religious studies at Siena College who accompanied the BWA group, said, in a sermon he gave shortly after returning, that he learned “instead of making judgments about Judaism, we should learn from it. I think we also need to acknowledge the importance and legitimacy of the State of Israel for the Jewish people.”

Madonna called the time he spent in Israel “the most important trip” he’s ever taken. “I tell my friends that I’d go back in a second,” he said. “I am happy it wasn’t cancelled. If it was, I’d apply again.”