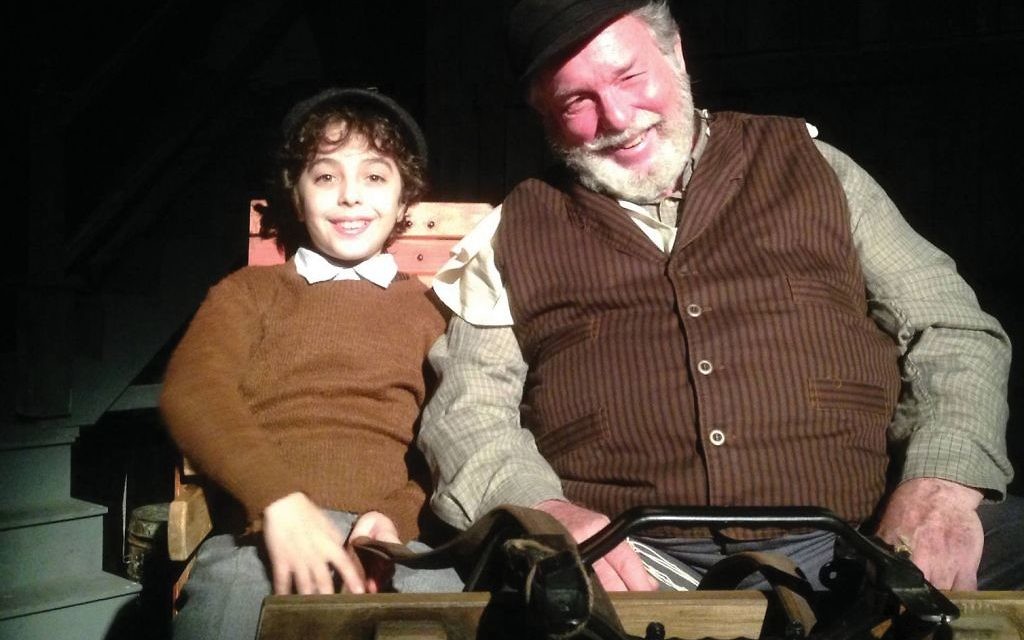 It was a kind of Canadian spin-off of “Fiddler on the Roof.” When Jan Kadar’s cinematic classic, “Lies My Father Told Me,” premiered in 1975, it was hailed as a stunning evocation of Jewish life in Montreal in the 1920s, as the older immigrant generation and its ways began to fade into obsolescence. The tale of a 6-year- old boy caught between his Tevye-like grandfather and his ambitious, money-hungry father, the film rode the wave of multiculturalism that had engulfed North America, and focused new attention on Jewish ethnicity.

Now, after a successful run in Montreal, the musical version of “Lies,” with music and lyrics by Elan Kunin, finally comes to New York. It opens next Thursday evening at the Baruch Performing Arts Center, as part of the Folksbiene Yiddish Theater’s 99th season.

Originally written as an autobiographical short story by the anti-Fascist journalist Ted Allan, who later created a radio play and then a play with music based on the same story, the musical is directed by Bryna Wasserman, the executive director of the Folksbiene. Wasserman also directed the production at the Segal Theatre in Montreal in 2005, two decades after her mother, Dora Wasserman, directed the play version at the same theater. (The dramatic version also ran at the Jewish Repertory Theater in New York in 1986, in a production directed by Lynn Polan.)

The 2005 Montreal production of “Lies,” which starred Theodore Bikel as Zayda, captivated an audience that was familiar with the Golden Globe-winning 1975 film, which, when it was restored in 2011, was hailed by Canadian film critic Sheldon Kirshner as the “quintessential Canadian film about a boy’s evolving view of the world, the vagaries of human nature and the Jewish immigrant experience in Canada.”

In the current “Lies,” Zayda (Chuck Karel) takes his grandson, David (Alex Dreier) with him on his horse-drawn wagon as he sells rags and other sundries throughout the Jewish neighborhood of Montreal. Quoting liberally, à la Tevye, from the Torah and Talmud, Zayda tries to fill the boy’s head with Jewish wisdom. But the boy’s father, Harry (Jonathan Raviv), a cynical and narcissistic tailor who keeps failing to get his father-in-law to invest in his creaseless pants and other inventions, disparages Zayda and his horse at every opportunity. When David, believing that he is following his grandfather’s wishes, spreads horse manure on the steps of a nasty neighbor, the ensuing confrontation fatally compromises the family’s ability to balance tradition and modern life.

“Lies,” which is performed in English, has, according to the Folksbiene’s artistic director, Zalmen Mlotek, an “exciting, moving, accessible, and tuneful score, with a crafty emotionality.” The production, which has the largest cast ever used by the Folksbiene, (17 actors in all), is, Mlotek pointed out, a “perfect introduction for people who are interested in the Yiddish world in both a quaint and a deep way.” The production has the strongest presale figures of any Folksbiene show in recent memory, he noted, with a number of performances, especially matinees, already sold out.

Although the production may seem like a departure from the Yiddish-language productions that have always been the Folksbiene’s hallmark, Mlotek said that the musical is the “next best thing” to a Yiddish-language show: an English-language play that “has Yiddish in its roots.” The tension between Yiddish and English is ironic in “Lies,” said Mlotek, given that the film was released at a time when Jews were dealing with a particularly fraught bilingual context; the Jews of Montreal spoke English rather than French, which led to significant anti-Semitism from the French majority and, ultimately, the relocation of thousands of Jews to Toronto.

As the Folksbiene closes in on its 100th anniversary, Wasserman said, the company is “trying to spread our wings and have an eye out for the next generation of talented young people like Elan. We want to be the place where that kind of talent is cultivated and nurtured.” While the company will, she pledged, “never forget the work of our canon and our masters,” it is in search of “new playwrights, composers, and lyricists, like Elan. We’re very optimistic about our next hundred years.”

Kunin told The Jewish Week that his biggest challenge in writing the music and lyrics was that the musical takes place in two different time periods, since the narrator is reflecting on his own childhood. “A lot of the music reflects the 1920s from his own perception, rather than a literal reflection of the period.” What David recalls, Kunin explained, may be “figments and perceptions of his best and worst moments,” in the same way as many of us “can relate to our best moments with our cherished grandparents, all tied together in a Jewish cultural essence.” The musical presents, he said, “two conflicting ideas of what it means to be Jewish — the grandfather’s Jewish life is rooted in tradition, while the father wants to be modern and to expand his options.”

While “Lies” (the film version of which was set to star Zero Mostel as Zayda; he was replaced by the Israeli actor Yossi Yadin) is very different from “Fiddler” in both setting and time period, Mlotek said that both musicals bring up similar issues about “how both to keep traditional values and to make it in the contemporary world.” In producing “Lies,” he said, the Folksbiene is continuing its attempt to “attract new audiences from among the percentage who aren’t affiliated religiously but who want to experience the cultural aspects of being Jewish.”

While some of the company’s donors question the relevance of Yiddish as a means of reaching out to these Jews, Mlotek tells them that Yiddish is “only a part of what we do.” The company’s ability to transcend its Yiddish origins, while still remaining faithful to them, is seen in the “poignance, grace, charm, and sensibility of a musical like this one.”