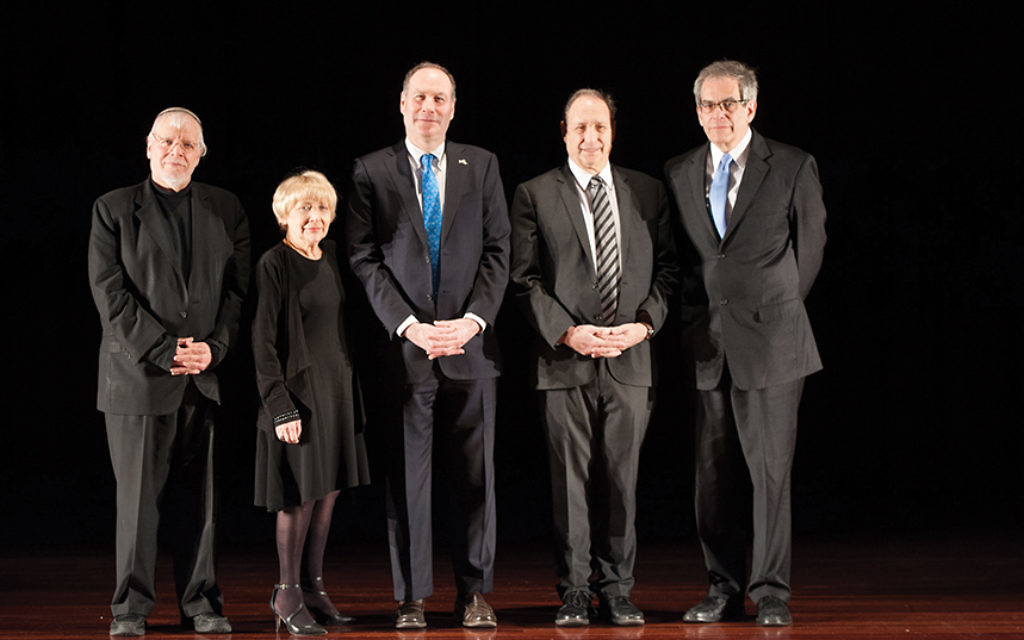 The National Yiddish Theater-Folksbiene marked its 100th birthday this week with a gala concert at Carnegie Hall featuring Itzhak Perlman and a major announcement: The NYTF and the Museum of Jewish Heritage-A Living Memorial to the Holocaust are joining in a strategic partnership. On Tuesday, officials of both organizations signed a memorandum of understanding that will give the groups two years to explore a potential merger.

According to the plan, the NYTF will become the resident theater company at the museum, and the two organizations will work together to showcase performances, integrate programming and educational opportunities.

In conversations, leaders of the two cultural organizations offered marriage metaphors, speaking of an engagement followed by courtship or a period of living together to see if they are compatible. Several used the work beshert, Yiddish for fate, or meant to be.

“This makes huge sense in every way,” says developer Bruce Ratner, executive chairman of Forest City Ratner Companies, chairman of the MJH and gala chair, who made the announcement to a sellout audience of 2,800 people. “These are two organizations with a similar mission — to encourage and promote our Jewish heritage in every way possible.”

Each group will have a key need met: After years of performing in different locales around the city, the NYTF will get its own home, which includes the 375-seat Edmund J. Safra Hall, and the museum will get thousands of new visitors to its downtown location. Visitors have a clear view of the Statue of Liberty and Ellis Island — sites at the heart of both institutions.

“There’s no limit to what we’ll be able to do,” David Marwell, museum director and CEO says. He explains that they’ll need to raise about $1.2 million for improvements to Safra Hall and to create another space. But they have temporary solutions in the interim.

For Zalmen Mlotek, NYTF’s artistic director, having a home has long been a dream. “I see it as a center of performing arts, a place where young children of all ages can come and learn about their heritage, whether through workshops with educators or performances they come to see.”

“As we enter our 100th year, we have this opportunity to have space, classes, [and] to bring in young people. It’s really a sign for all the naysayers worried about the demise of Yiddish. Here we are about to start on a new page.”

Chris Massimine, executive producer of NYTF, speaks of multi-platforms, with events that look different from anything happening in the city.

In June, MJH serves as home base for KulturefestNYC, a weeklong celebration of Jewish culture, presented by NYTF in collaboration with UJA-Federation of New York. In the fall, the NYTF will launch its 101st season at MJH.

“This is win-win,” says Jerome Chanes, former executive of the National Foundation for Jewish Culture and a culture watcher.

“Here’s a way to develop a program that’s unusually broad and unusually deep, that’s entirely consistent with the agenda and mission of both institutions.”

Stephen J. Whitfield, a historian at Brandeis University and author of “In Search of American Jewish Culture,” tells The Jewish Week, “The proposed merger demonstrates the truism of cultural historians that their subject is never static … and it only proves how much Jewish culture is a story of innovation as continuity.”