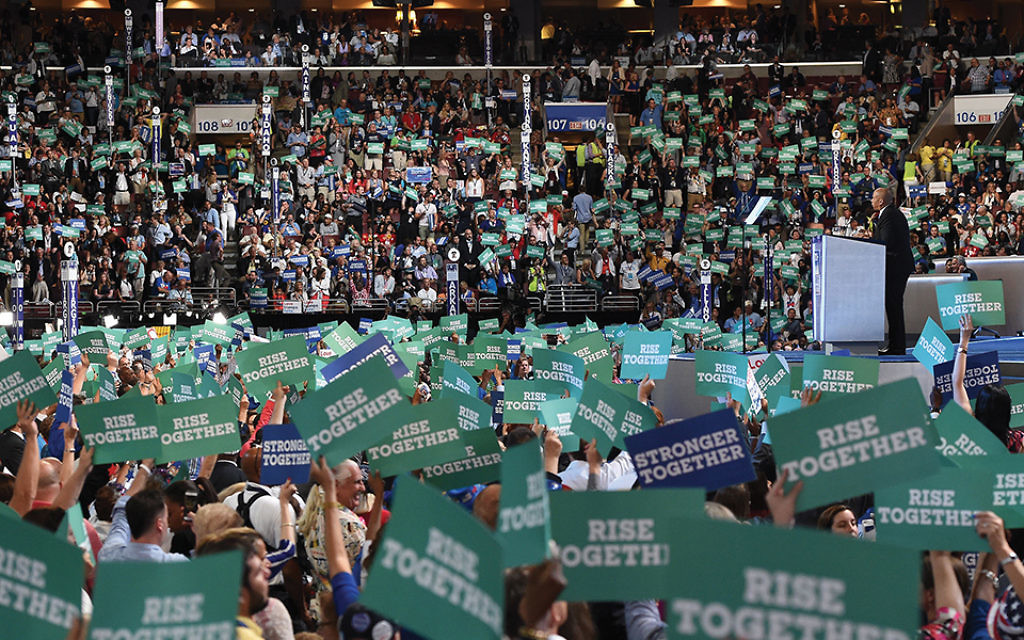 Philadelphia — As Democrats prepared for the roll call vote that would make Hillary Clinton the first woman presidential nominee of a major American political party, Florida delegate Ellen Brodsky said she would never vote for her.

“I may write in Bernie’s name,” she said, referring to Vermont Sen. Bernie Sanders, whose campaign for the Democratic nomination won him 23 primaries and caucus contests, 13 million votes and 46 percent of pledged delegates.

Brodsky, of Coconut Creek in Broward County, said she even held out hope that “Hillary’s scandals may escalate to the point that the Democrats beg Bernie to take over.”

But another Sanders’ delegate, Bruce Jacobs of Miami, said he is prepared to vote for Clinton “because that is what he [Sanders] told us to do.”

A Pew Research survey found that 90 percent of Sanders’ supporters plan to vote for Clinton in November. E.J. Dionne, a senior fellow at the Brookings Institution and a political commentator, said the Jewish vote in Florida could make the race “genuinely competitive.”

House Minority Leader Nancy Pelosi told the Florida delegation Tuesday: “The difference will be made in Florida to elect the first woman president of the United States. And it is not because she is a woman — it’s because she is the best.”

Sanders himself addressed the Florida delegation Tuesday morning, imploring them to work to get out the vote for Clinton.

He made no mention of the 20,000 Democratic National Committee emails hacked by suspected Russian agents that showed the party leadership covertly worked for Clinton in her primary races against Sanders. Nor of the email in which the party’s chief financial officer, Brad Marshall, suggested opponents question Sanders’ religious beliefs.

Bruce Jacobs, 44, the Miami delegate who is also a radio talk show host and lawyer, said Marshall’s suggestion was “unfortunate and disappointing — and the reason why people are upset with the way politics works.”

He suggested it was ironic that such a campaign was waged against Sanders because “he ran the most honorable campaign I’ve seen in my lifetime. … The idea that the DNC was unfair means there is a lot of work to do. We are not leaving the party but are going to clean it up.”

The disappointment of Sanders’ supporters came to the fore when some booed him after he asked them to work for Clinton’s election.

“It is easy to boo, but it is harder to look your kids in the face who would be living under a Trump presidency,” he told the California delegation.

When there were boos on the convention floor Monday night, comedian Sarah Silverman, a Sanders’ supporter who was at the microphone at the time, said, “To the Bernie or bust people: you’re being ridiculous.”

Clinton supporters pointed out that the party’s platform includes many provisions inserted by Sanders representatives, including a minimum wage of $15 an hour and a free state college education for families with an income of $125,000 or less.

The Debate Over Israel

But Eleanor Sobel, a Florida state representative from Broward County, said Clinton’s representatives succeeded in rejecting Sanders’ demands that the platform have a “pro-Palestinian” bent.

“Israel is the only real democracy in the Middle East and as someone who is strongly opposed to BDS [Boycott, Divestment and Sanctions] I was upset that many of the people supporting Bernie are pro-BDS,” she said. “They want the Palestinians to have equal military power, and that is unacceptable. As one of the people who led the charge in the Florida Senate across party lines against BDS and who helped to write that legislation, I strongly stand behind Hillary Clinton.”

She added that some Sanders delegates even wore “Palestinian scarves” on the floor of the convention.

In the spectator seats Monday evening, two young men holding a sign reading, “I Support Palestinian Human Rights,” and wearing buttons and shirts with the same inscription said they and two associates had been visiting different delegations and had received a “receptive” response.

“We want to end [Israeli] settlements and the expansion of the Israeli state,” explained Kareem el-Hosseiny, a member of American Muslims for Palestinians.

A Sanders supporter sitting in the stands asked for and received one of their buttons.

He was seated next to a Clinton supporter, Jill Stein of Lower Meron Township in suburban Philadelphia, who wore a button with the name Hillary in Hebrew.

“She is the only person to run for president who is overqualified,” said Stein, who is of no relation to the Green Party candidate for president of the same name.

She added that Republican friends she has spoken with don’t believe Trump has the experience to govern.

“I don’t think he is anti-Semitic, but he is an authoritarian and he says things his white base in the South wants to hear,” Stein said. “I still can’t believe the amount of anti-Semitism and overt racism that has come to the fore — and it started with Trump’s claim that Mexicans are rapists.”

A similar sentiment was voiced by Stuart Appelbaum, president of the Retail, Wholesale & Department Store Union, who said: “The Jewish community more than any other understands where bigotry leads. We have to be outraged by his demonization of groups of individuals. When you go after one group, who will be next?

“As a Jew, I am particularly outraged by Donald Trump’s attacks on fellow human beings based on their religion or where they were born or the color of their skin. It’s incumbent upon all of us in the Jewish community to say that is unacceptable.”

Rep. Eliot Engel (D-Bronx,Westchester) said Jews have traditionally supported Democratic presidents and that “social positions are one of the reasons — the concept of tikkun olam” (repair of the world).

“I think the Republican philosophy is one of catering to the wealthy and believing it will trickle down to the rest of us,” he said. “The Democrats are speaking of $15-an-hour minimum wages, they introduced Medicare, Medicaid, Social Security and the health care act — things that appeal to Jewish families.”

Lori Berman, a Florida state representative from Palm Beach County, said that both Hillary and Bill Clinton “are strong friends of Israel and we need to recognize that. She would be the strongest advocate for Israel and the platform reflects that.”

A member of the platform committee, Manhattan Assemblyman Richard Gottfried, said the Israel section was “compromise language that was broadly supported by people with a variety of viewpoints.”

The platform calls for a two-state solution to resolve the Israeli-Palestinian conflict, something the Republican platform omitted. Trump’s Israel advisers said they don’t believe Israel should be pushed into such an arrangement, and said a one-state solution should not be ruled out.

“That’s an absurd position,” Gottfried said. “I don’t know if any American president or political party ever supported that. It’s a wacky notion.”

“I feel confident that the Jewish community will understand that Hillary Clinton will not only be a strong supporter of that relationship but make clear that Israel is our strong ally and must receive all the support it needs in a tough neighborhood,” she said. “She has spent a lifetime working for Jewish values: education, health care, the right to choose and women’s rights. Donald Trump cares about Donald Trump.”

Assemblyman David Weprin (D-Queens) was also critical of Trump, saying he “says whatever is on his mind and he goes off on tangents. … He has been part of the New York real estate community and I don’t know of any board he has been on or any public policy decisions he has made. And now he is running for president. That’s pretty scary.”

But Trump’s positions on many issues are unclear, according to Rep. Steve Israel (D-Queens, L.I.). He noted that Trump at first said he would be neutral on the Israel-Palestinian issue and later said something else.

“His credibility is not that high,” Israel said. “Usually the first thing you say is what you mean.”

He said he believes Clinton will win in November because “she has more growth potential than Donald Trump. Every election is about how much you can expand beyond your base. He is at the ceiling and Hillary Clinton is at the floor of that potential. When all is said and done, she wins.”

Added Weprin: “No one wants Donald Trump,” a refrain heard by many Sanders supporters in explaining why they plan to vote for Clinton.