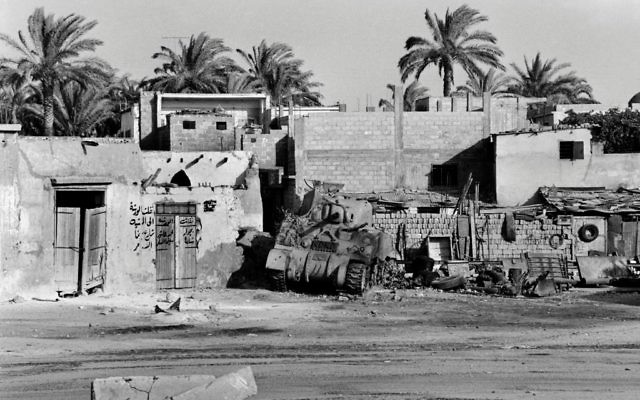 View of a destroyed tank on the road between Bethlehem and Jerusalem in June 1967 during the six-day war. Getty Images

In some ways the Arab-Israeli war that was waged 50 years ago this week is still being fought. If not on the battlefield then in the hearts and minds of adversaries who blame each other for that conflict and vie for the right to own its narrative — and all that has come after in the last five decades.

Evidence of the war of words being waged could be seen this week in the opinion pages of newspapers here and in Israel, marking the anniversary of the conflict that changed the map of the Mideast.

In one prominent exchange, Nathan Thrall of the International Crisis Group wrote the lead article in the Sunday Review section of The New York Times, headlined “Israel’s Everlasting Occupation.” It sought to make the case that Israel only makes compromises after being forced by violent Palestinian actions and/or American diplomatic pressure.

Countering that argument, David Makovsky of the Washington Institute for Near East Policy wrote that Thrall’s idea “is both morally wrong and historically inaccurate” and “creates a fatally mistaken sense of cause and effect” in asserting that Israel only seeks compromise under pressure. Makovsky described how Israel’s peace efforts were motivated by leaders who have never sought to occupy another people. But unilateral withdrawals from Lebanon in 2000 and Gaza in 2005 resulted in rocket attacks against Israel’s civilian population. “Violence discredits Israeli pullouts,” Makovsky wrote. “It did not facilitate it.”

The flurry of reports and essays marking the Six-Day War milestone, like countless ones that preceded them over the years, tend to reflect either a pro-Israel or pro-Palestinian narrative. One side minimizes the negative effect of the settlements on peace efforts; the other side avoids the magnitude of Palestinian violence and consistent anti-Semitic propaganda. But surely an objective historian would counter Nathan Thrall’s assertion that Israel’s claim to have no credible Palestinian partner for peace is a “myth.”

In fact, repeated attempts by Israel to negotiate and achieve a two-state solution have been rebuffed consistently and without counteroffers, starting with the three No’s of the Khartoum Conference two months after the June ’67 war. It was there that the Arab League, in the aftermath of a bitter defeat, passed a resolution that said no peace with Israel, no recognition of Israel and no negotiations with Israel. Another resolution supported the Palestinians’ right to regain “the whole of Palestine.” In other words, to destroy the Jewish state.

After Egyptian President Anwar Sadat failed to achieve that goal in 1973, despite a successful surprise attack on Yom Kippur, he came to believe that he had a better chance to win back the Sinai through diplomacy than via another bloody war.

It was Menachem Begin, the proud nationalist, who partnered with Sadat, culminating in an historic peace in 1979 that still holds, and which led to a similar peace pact with Jordan in1994.

Today much of the region is in chaos, from Syria’s horrific war on its own people to the bloodshed in Yemen. The emergence of Iran, a world leader in exporting terror, as a future nuclear threat has created a bonding of unlikely and under-the-radar allies, including Israel, Saudi Arabia, Egypt, Jordan and Gulf states, all of whom feel threatened by Tehran. The Trump administration hopes to parlay that alliance into a Mideast peace deal, with an Israeli-Palestinian agreement at its core.

For much of the Arab world, though, Israel’s original sin remains its very existence as a Jewish state in the region. Three years prior to the 1967 Six-Day War, which left Israel in command of the West Bank, Gaza, Sinai, the Golan Heights and east Jerusalem, Yasir Arafat created the Palestine Liberation Organization. What land was he seeking to “liberate” in 1964 other than the State of Israel, which he and his followers still considered Palestine?

The ’67 war was prompted by Egyptian President Nasser’s pledge to drive Israel into the sea. Yet Israel had the audacity to not only defend itself but to achieve a commanding victory against three Arab armies. Over the decades it has grown into a strong nation, striving to provide its citizens with security while seeking ways to end the conflict with its sworn enemies. The struggle continues, but each of us should take great pride in what Israel has accomplished and in its aspirations to be accepted as a state grounded in Jewish ethics and democratic values, a light unto the nations.