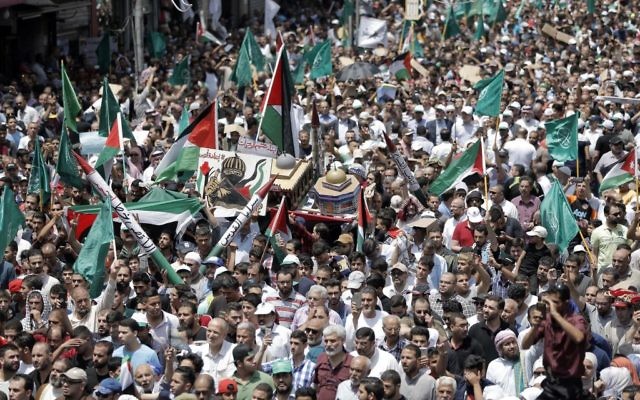 Jordanians protest over new Temple Mount security measures on July 21, 2017 in Amman, Jordan. Tensions have escalated after an Israeli security guard at the Israeli embassy in Jordan shot and killed a teenage assailant and a bystander after he was attacked. Getty Images

Following at attack yesterday at the Israeli Embassy in Amman, in which a Jordanian civilian tried to injure an Israeli guard and was shot dead, Jordan is barring the Israeli guard from leaving the country, Haaretz reports.

The Israeli Foreign Ministry is reportedly working to evacuate all the staff of the Israeli embassy for fear that the incident would lead to further attacks, riots and attempts to attack the embassy. Jordanian authorities have refused to allow the security guard to leave the country and have demanded an investigation.

Israel claims that the guard, who was slightly wounded in the attack, has diplomatic immunity under the Vienna Convention.

Chief rabbi: Terrorist should have been killed

Sephardi Chief Rabbi Yitzhak Yosef told followers on Saturday, a day after an Arab terrorist murdered three members of a family during a Shabbat meal, that Israeli police would have been authorized to kill Omar al-Abed, who survived his attack and was taken to an Israeli hospital. 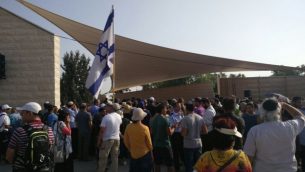 Mourners attend the funeral of Yosef Salomon, 70, and his two children Chaya, 46, and Elad Salomon, 36, who were stabbed to death in their home by 19-year-old Palestinian Omar al-Abed, July 23, 2017. (Raoul Wootliff/Times of Israel)

The Times of Israel quoted Rabbi Yosef as saying, “Too bad they did not kill this terrorist. They should have killed him. Every Arab terrorist who comes to murder must not return alive. If you know that he came to attack the Jewish people, you must kill him. Not just wound him, you must kill him.””

The three victims, Yosef Salomon, 70, his daughter Chaya Salomon, 46, and son, Elad Salomon, 36, were buried yesterday in a funeral that thousands of Israelis attended.

The town of Mahwah has ordered a Jewish community group to stop building an eruv that is made up of white plastic piping, according to Associated Press. The New Jersey municipality told the South Monsey Eruv Fund to stop installing white PVC pipe on utility poles.

The New York religious community was given the OK to post the piping by the utility company that owns the poles, but the town says that they are considered signs and not allowed.

Thousands of people have rallied in Tel Aviv to show their support for same-sex couples who want to adopt children, JTA reports. The demonstrators held signs reading “We are not second class citizens” and “Bibi go home.” 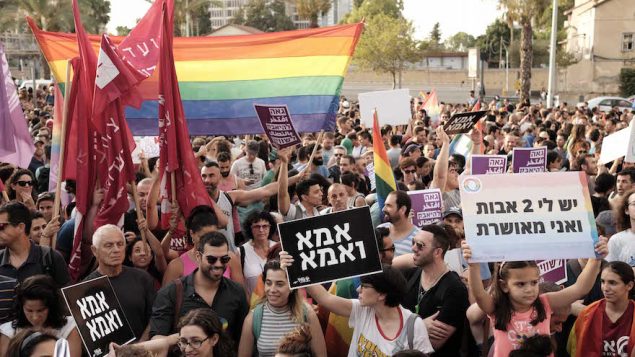 Hundreds protest in support of the right of LGBT couples to adopt children, outside the Ministry of Absoprtion in Tel Aviv on July 20, 2017. JTA

Clashes between protesters and police led to the arrest of five demonstrators. Several days earlier, the Israeli government said it remains opposed to allowing same-sex couples to adopt in the country in response to a Supreme Court petition.

Some 60 headstones were toppled last week in a Jewish cemetery in Hartford. The damage at the Ateres Knesseth Israel Cemetery was discovered on Friday, when a relative of someone buried there visited the gravesite.

Most of the 60 gravestones reportedly can be reset on their bases, but at least two were shattered. The cost to repair the damage is estimated at up to $10,000.

Hartford Police told the daily newspaper the Hartford Courant that there is no evidence that the vandalism is a hate crime since no anti-Semitic graffiti was found at the scene. There were no security cameras in place at the cemetery.

A delegation of elite Israeli firefighters, aided by the Air Force’s Fire Squadron, completed a five-day relief mission yesterday in Montenegro to put out wildfires that has ravaged the country’s coastline in recent days, according to the Jerusalem Post.

After initially being grounded last week due to high winds and turbulence, firefighting planes, including two Israeli AT-802s, later began battling the blazes. Although no casualties were reported, several homes, a kindergarten, offices, and a cemetery were destroyed.

During the operation, dubbed “Black Mountain,” Israeli firefighters dropped 78,000 liters of fire retardant in Montenegro while carrying out 36 sorties that lasted more than 42 hours.