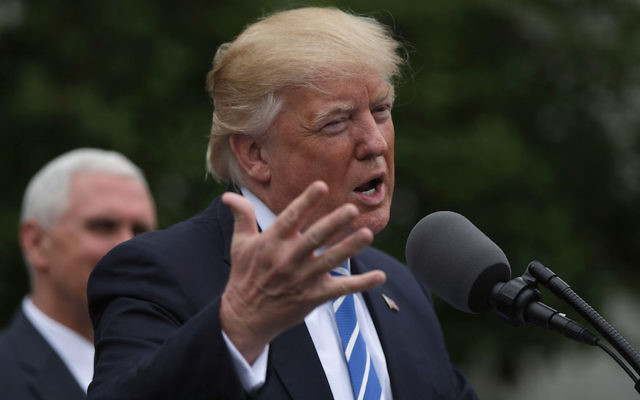 President Donald Trump speaks at an event in the Kennedy Garden of the White House on May 1, 2017. JTA

The State Department has called the posting by the U.S. Embassy in Saudi Arabia of a video that removed Israel from an announcement about President Trump’s upcoming trip to the Middle East an “inadvertent mistake” JTA reports.

Rep. Eliot Engel (D-N.Y.) yesterday criticized the State Department for “editing out” Israel in the video posted on the Riyadh embassy website and Arabic-language Twitter account. The videos were no longer available later the same day, and a subsequent video on the embassy site that included Israel.

A State Department official said in a statement that the embassy had taken the video from the social media account of a private Saudi citizen without realizing that Israel had been edited out. “Upon learning this, the U.S. Embassy immediately corrected the error, took down the video, and loaded the correct version to its social media accounts,” the official said. “The Embassy expresses its regret for this inadvertent mistake.”

An educator from the Chabad-Lubavitch chasidic movement who has earned a reputation for fixing failing New York City schools is ready to “roll up his sleeves in one of the worst performing school districts on Long Island,” CBS News reports. Shimon Waronker was recently named as the new superintendent by the Hempstead School Board.

Waronker will be working in a 99-percent-minority community, in a district with a paltry 48 percent graduation rate. “I’m very hopeful,” he told CBS. “I don’t see how my religion is going to affect [his performance] – other than Jews value education, and I bring that philosophy and spirit to this district. And the children will be like my children.”

Memorial for Lebanese soldiers who fought alongside Israelis

A cornerstone was laid this week for a memorial to the fallen soldiers of the South Lebanon Army (SLA), which cooperated with the Israeli Army until Israel’s withdrawal from the area in 2000. The monument will be erected next to a gate in “the Good Fence” through which Israeli soldiers entered Lebanon, according to ynetnews.com.

The SLA’s fallen will be memorialized there “both with a monument and a heritage site with information about it and the cooperation between its members and the State of Israel,” ynetnews reports.

Parents seeking to adopt children in Texas could soon be rejected by state-funded or private agencies with religious objections to them being Jewish, Muslim, gay, single, or interfaith couples, under a proposal in the Republican-controlled Legislature, CBS News reports.

Republican sponsors of the bill said it is designed to support the religious freedom of adoption agencies and foster care providers, many of which are private and faith-based but receive state funds. But opponents say it robs children of stable homes while funding discrimination with taxpayer dollars

Five other states have passed similar laws protecting faith-based adoption organizations that refuse to place children with gay parents or other households on religious grounds – but Texas’ rule would extend to state-funded agencies. Only South Dakota’s is similarly sweepingly. 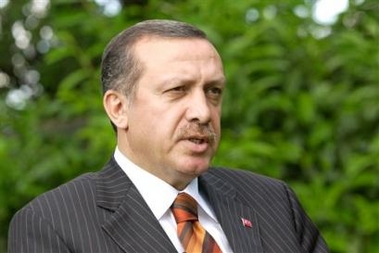 “It is impossible to find a solution and peace in the region without finding a fair solution for the Palestinian cause first,” Erdogan was quoted as saying. “Israel keeps getting away from punishment.”

JERUSALEM (JTA) — About 20 cars were vandalized in eastern Jerusalem and in the Galilee area of northern Israel in what are being investigated as anti-Arab hate crime attacks.

The cars were vandalized in eastern Jerusalem overnight in a swath running from the Arab Shuafat neighborhood to the haredi-Orthodox neighborhood of Ramat Shlomo. The damage was discovered early Tuesday morning.

Their tires were slashed and spray-painted messages read “price tag” and “King Pikar.” The term price tag is used by Jewish extremists to indicate revenge for attacks on settlers and other Israelis or when legal action is taken against one of their own. Elkana Pikar, who the military believes is a leader of the settler hilltop youth, is a resident with his wife and six children of the West Bank settlement of Yitzhar, home to many extremists, who was recently given an administrative restraining order banning him from the West Bank for four months.

A wall in the area was also spray painted with the words “Mohammed is an administrative pig.”

In the Arab-Israeli village of Na’ura in the Galilee, the tires of eight cars were slashed and price tag graffiti including “Administrative revenge” and “Administrative price tag” was sprayed on the walls of several houses.

The vandals were caught on security cameras entering the village at 2 a.m. on Tuesday to commit the acts.