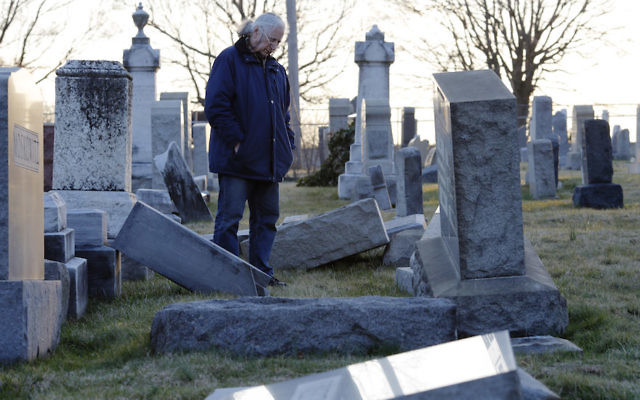 A man looking at fallen tombstones at the Jewish Mount Carmel Cemetery in Philadelphia, Feb. 26, 2017. JTA

(JTA) — New York State police have called on the public to help find the vandals who defaced a Jewish cemetery with anti-Semitic graffiti.

The brick wall surrounding the Beth Shalom Cemetery in Warwick, a suburban town located about 90 minutes north of Manhattan, was vandalized with black spray paint including the words “Heil Hitler,” swastikas, and SS lightning bolts. The attack occurred in October, just days before the observance of Yom Kippur.  A Catholic cemetery across the street owned by the 70-year-old Temple Beth Shalom of the Village of Florida was not vandalized.

Both state police and Town of Warwick police are investigating the vandalism, the Times Herald-Record newspaper reported. The police have put out a call in local media for assistance, including publicizing the numbers for their tip lines.

The Jewish Federation of Greater Orange County is offering a $10,000 reward for information leading to a conviction in this case.

Alexander Zvielli, the Jerusalem Post’s last living link to its history during the era of Israel’s birth, has died at 96. The native of Warsaw, who joined the then-Palestine Post as a linotypist  in 1945, remained with the Post for 72 years, eventually becoming chief archivist and historian, plus a regular contributor to the editorial pages and the weekend magazine.

A planned visit by Prince Charles to Israel later this year to mark the centennial of Balfour Declaration has allegedly been scrapped to avoid upsetting Arab nations, according to the London Jewish Chronicle. Although the trip was never officially announced, it was rumored to be under consideration, the paper reports.

No member of the British royal family has ever been on an state visit to Israel, although there have been official visits to Saudi Arabia, Jordan, Egypt, UAE, Oman, Bahrain, Iran, Iraq, Kuwait, Libya and Qatar.

A mural urging respect for people’s differences, including religion, will be erected next to a suburban Philadelphia Jewish cemetery that was vandalized, JTA reports. About 175 headstones at the Mount Carmel Cemetery in Wissinoming were toppled and damaged in February.

Two Philadelphia labor unions offered to provide free repairs and added security, including setting and gluing the stones, fixing the cemetery fence and increasing the lighting.

Now Mural Arts Philadelphia is launching the mural in partnership with the Interfaith Center of Greater Philadelphia, Friends of Wissinoming Park and Philadelphia Parks and Recreation. The mural, which will be titled “Cultivate Respect,” will be erected in Wissinoming Park adjacent to the cemetery and is expected to be completed by the end of June.

PA official: Criticism of payments to terrorists’ families is ‘absurd’

A senior Palestinian Authority official has rejected as “insane” a U.S. demand that the PA end its policy of providing social welfare payments to the families of Palestinian terrorists jailed for carrying out attacks against Israelis, according to the Times of Israel. The paper reports that Nabil Shaath, PA President Mahmoud Abbas’ foreign affairs adviser, told Israel Radio that the Trump administration’s demand was intentionally designed to sink any potential for renewed U.S.-led Israeli-Palestinian peace talks.

Shaath called the Palestinian prisoners victims of Israel’s control over the West Bank. “It’s absurd to request that we stop paying the families of prisoners. That would be like asking Israel to stop paying its soldiers.”