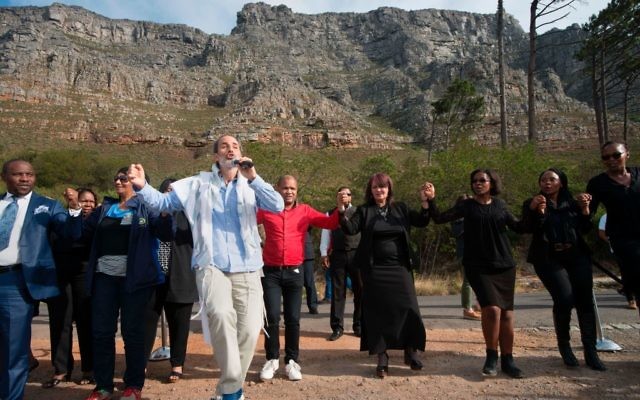 A Jewish rabbi leads a traditional dance during a prayer for rain at the foot of Table Mountain, on May 25, 2017, in Cape Town. The mayor of Cape Town, Patricia de Lille, has called on religious leaders from various denominations to come together to pray for rain in the drought-stricken province, where stock of water in the area's dams have only about 10% of useable water left. Getty Images
South African chief rabbi calls for fast for rain
Warren Goldstein, the chief rabbi of South Africa, has called on members of the Jewish community to fast for a half day this week to  bring rain that will end a drought that has struck Cape Town, the South African Jewish Report reports.
“Perhaps the heavens heard the Chief Rabbi’s plea,” the paper reports – “On Wednesday, for the first time in ages, Cape Town awoke to cloudy skies as a light rain settled in. But it was not enough to even measure.”
“This fasting should be accompanied by thoughts of introspection, as well as heartfelt prayers to Hashem,” the rabbi declared. 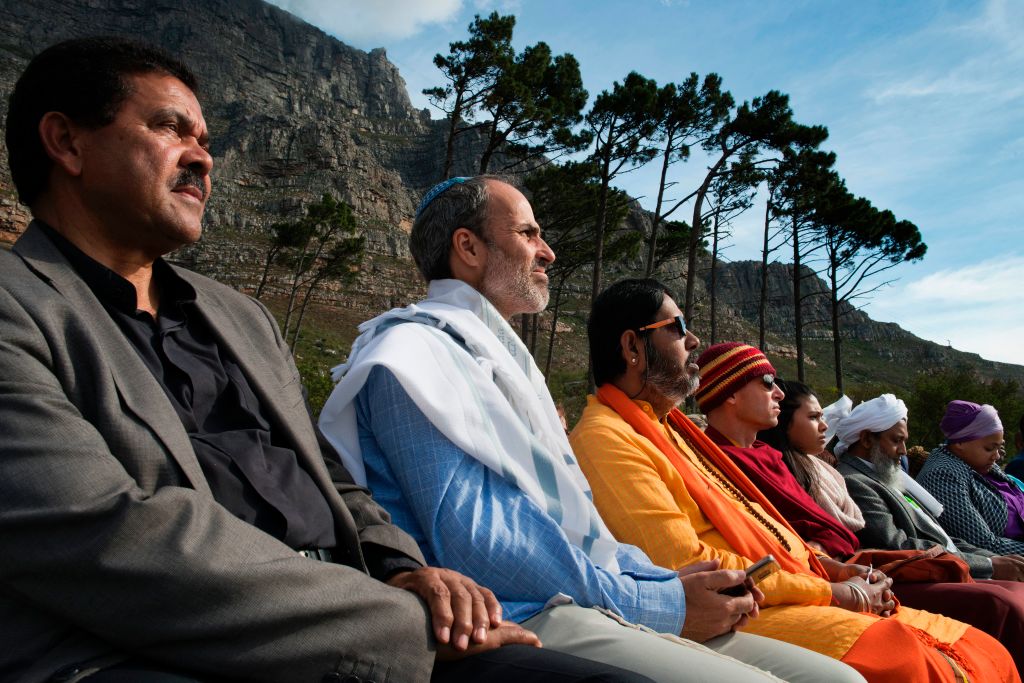 Leaders from various religious communities took part in a joint prayer session for rain on Table Mountain in Cape Town on May 25, 2017. The mayor of Cape Town, Patricia de Lille, has called on religious leaders to come together to pray for rain in the drought-stricken province. Getty Images
Honor set for Palestinian terrorist at California college
Aarab Barghouti, the son of imprisoned Palestinian terrorist Marwan Barghouti, will speak on Friday at the University of San Francisco, a Jesuit institution, Arutz Sheva reports.
Marwan Barghouti, who organized a hunger strike of Palestinian terrorist prisoners that just ended, is serving five life sentences in prison in Israel for specific murders, according to Arutz Sheva, “but bears responsibility for the murders of over 100 men, women and children in terrorist attacks in the Jewish state, some of them U.S. citizens.”
Chabad opens in Laos, its 92nd country
A Chabad House has opened in Laos, making it the 92nd country with a permanent Chabad presence.The two-story villa in the city of Luang Prabang contains a large dining facility, synagogue, lounges and a garden with a pond. It is located near guesthouses that are frequented by Israeli travelers, mostly backpackers who tour the Far East after their army service. 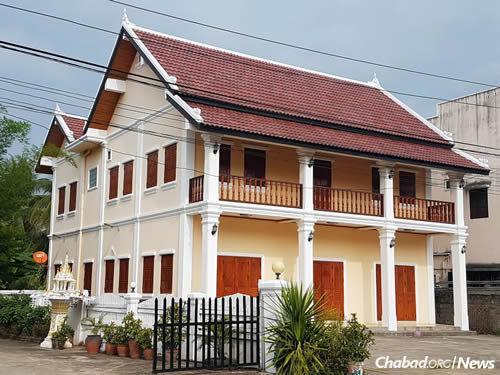 The two-story villa contains a large dining facility, synagogue, lounges, and a residence for the rabbi and his wife. Courtesy Chabad.org/News

The Chabad House already runs a kosher restaurant, holds weekly prayer services, Torah classes and Shabbat celebrations for about 50 people, according to Chabad.org. It put together a last-minute prayer service with a minyan for an ex-pat Englishman who needed to say Kaddish for his father.

Rabbi Sholom and Tamar Glitzenstein, the new Chabad emissaries in Laos, arrived at the beginning of the year to set up the Chabad House, where they also live.

-JTA
British politician denies praising Munich Olympics murderer
Jeremy Corbyn, the controversial leader of the Labour Party in England, has denied reports that in 2014 he honored a Palestinian perpetrator of the 1972 massacre of Israeli athletes at the Munich Olympics, according to JTA.
Corbyn,  a “hard-left politician” whom the president of the Board of Deputies of British Jews said “most people in the Jewish community can’t trust” because of his praise for Hezbollah and Hamas, wrote a 2014 newspaper article in which he recounted attending a ceremony in Tunisia “where wreaths were laid … on the graves of [those] killed by Mossad agents in Paris in 1991.”
This prompted speculation that Corbyn, whose party will contend in the general election on June 8 against the ruling Conservative Party, had honored the memory of Atef Bseiso, who was head of intelligence for the PLO and was involved in the murder of the Israeli athletes as part of the 1972 Black September terrorist operation in Munich. Bseiso was killed in Paris in 1992.
But spokespeople for Corbyn told Board of Deputies President Jonathan Arkush that “Jeremy Corbyn condemns the Munich massacre and its perpetrators, and that what he was attending was not anything to do with perpetrator Atef Bseiso, but an event to commemorate the 1985 bombing of the PLO headquarters.”
Widower of Israeli terror victim remarries
Natan Meir, whose wife Dafna was killed in a terror attack in their home last year, was married last week in a ceremony in Jerusalem, according to JTA. Only close family attended the wedding, and photos from the wedding were released to the public. 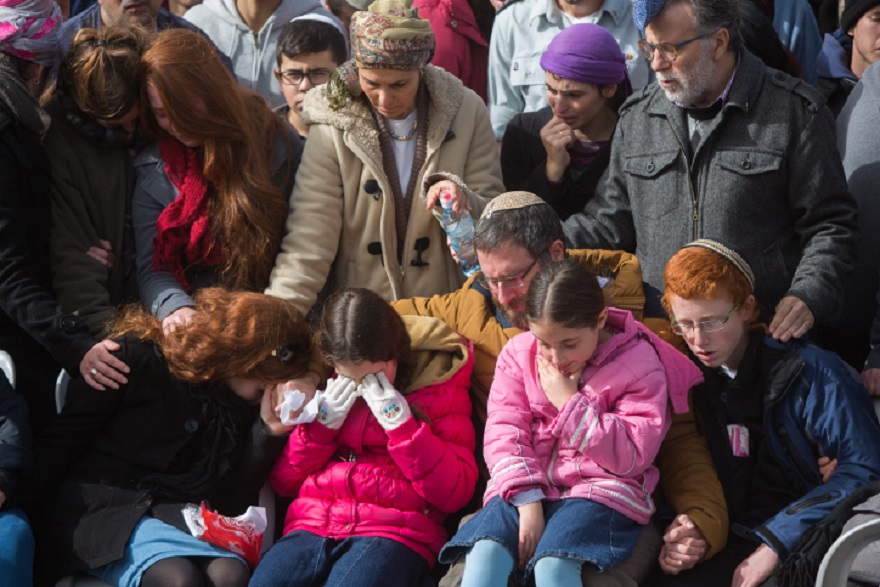 Husband and children of Dafna Meir grieving at her funeral in Jerusalem the day after her stabbing death in the West Bank i January 2016. JTA
Meir announced in March that he was engaged to Zohar Morgenstern of Jerusalem. The announcement came over a year after the terror attack in the West Bank settlement of Otniel. His daughter, Renana, 18, who witnessed the attack, became engaged a week before her father.
Dafna Meir, 38, a mother of four and foster mother of two young children, was stabbed to death in January 2016 at the entrance of her home by a teenage Palestinian attacker. She was fighting off her attacker in what is believed to have been an attempt to save three of her children who were in the house at the time.
Ukraine requests ex-cabinet minister’s extradition from Israel
Ukraine has reportedly made a formal request for extradition of a former cabinet minister on charges of embezzlement, some 18 months after he fled to Israel, the Jerusalem Post reports.
In October 2014, numerous reports surfaced that the former minister of energy and coal mining of Ukraine, Eduard Stavytsky, had fled to Israel to escape from Ukrainian and INTERPOL arrest warrants on embezzlement charges. The reports also alleged that in addition to using the Law of Return, Stavytsky bribed Israeli officials to gain entry into the country.