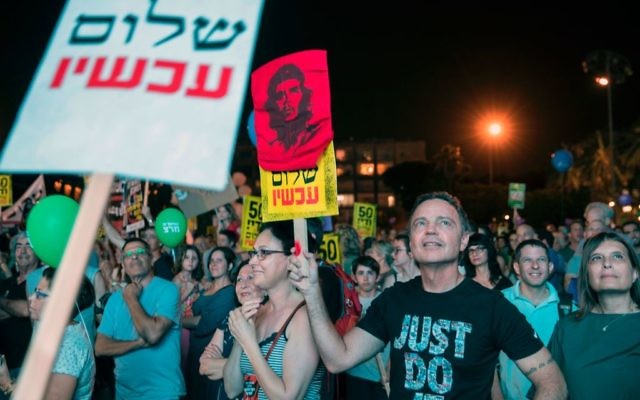 Israeli left-wing supporters gather at Rabin Square in the Israeli coastal city of Tel Aviv for a mass demonstration against 50 years of occupation titled "Two States - One Hope", on May 27, 2017. Getty Images
Thousands rally in Tel Aviv for two states, against occupation

Thousands of Israelis gathered in Rabin Square in Tel Aviv to demonstrate against what organizers called “50 years of Israeli occupation of the Palestinian Territories.”

The rally on Saturday night under the banner of “Two States – One Hope” was organized by anti-settlement group Peace Now and included left-wing Israeli political parties such as the Zionist Union and Meretz, as well as several other left-wing organizations including the Geneva Initiative, the New Israel Fund, “Standing Together,” “Zazim” and “Reinforcing the Left on the Web,”

-JTA
‘No Jews’ graffiti found on Rockland home wall
A home inspector who entered a vacant Town of Haverstraw house in Rockland County last week was shocked to find the words “No Jews” spray-painted in large black letters on a basement wall. Baruch Weiner said he found a glass pane on a basement door had been broken and the door unlocked.
Weiner, who said the home’s other rooms had been vandalized, including floors, kitchen cabinets and appliance, called police, who confirmed the vandalism and said the department was investigating the incident as a hate crime.

A group of children saved from the Nazis in Czechoslovakia by Sir Nicholas Winton, known as the “British Schindler,” have unveiled a monument in Prague to their parents, JTA reports. The monument at the capital’s main train station, called the Farewell Memorial, is comprised of a replica of a train door from 1939, with the imprints of hands of children on one side, and of parents on the other. 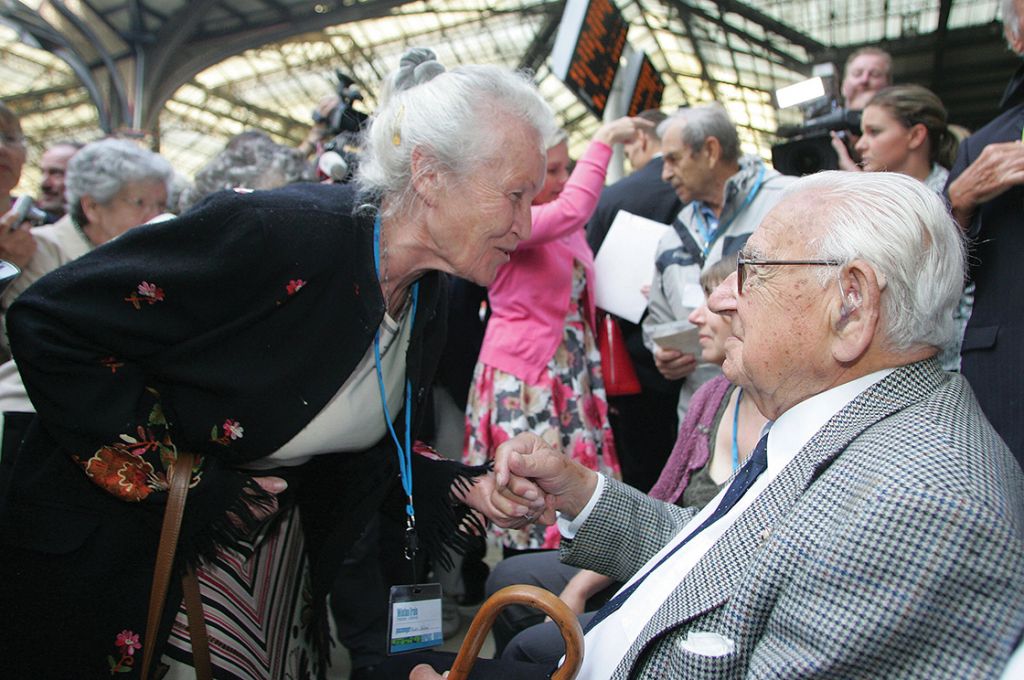 Sir Nicholas Winton is greeted by one of the 669 now-grown children he had rescued from Nazi-annexed Prague. Getty Images

Winton, the baptized son of Jewish parents, was a 29-year-old stockbroker when he arrived in Prague in December 1938, planning to go on a skiing holiday in Switzerland. He changed his plans when he heard about the refugee crisis in Czechoslovakia, which had just been occupied by the Nazis. In the following nine months he organized eight trains that carried 669 children, the vast majority of them Jewish, from Czechoslovakia to safety in Britain.

Most of the children saved by Winton, who arrived in Britain on the Kindertransport and were taken in by British foster families, never saw their parents again.

Joshua Massin, an Orthodox chef from Teaneck, offers bacon and ham and oysters—kosher dishes that taste like the treif food—at his New Jersey restaurant, the Nobo Wine and Grill, The Record reports. Most of the “overwhelmingly kosher diners” at the restaurant enjoy the selection, he said.

Seventy-five years after the Nazis declared Estonia was “Jew free,” the Baltic country’s president has celebrated the return of Jewish life there at an event attended by Israeli politicians and rabbis last week. President Kersti Kaljulaid received the guests, including Israel’s chief Ashkenazi rabbi, David Lau, at a ceremony in Tallinn, the capital, celebrating the 10th anniversary of the establishment of the first Jewish community in Estonia after the Holocaust.

“The story of the Synagogue of Tallinn tells us about the fate of the Jewish community,” Kaljulaid said, referring to the destruction by the Nazis of all Jewish houses of worship in the country, where Soviet authorities who took over from the Nazis refused to allow the country’s few Jews who returned from death camps to build any synagogues.

Estonia has a Jewish community of 2,500.

The Yeshiva Toras Chaim Toras Emes school, which has enrolled 600 students from early childhood to high school, received a fax on Sunday demanding $25,000 in ransom and threatening to detonate explosives already in place at the school if the demand was not met, WSVN News 7 reported late Sunday.

The message warned school officials not to call police, saying if they do so “I’ll know.” The letter also said that the would-be bomber had access to the school’s computers and email addresses, according to The Yeshiva World news website. The letter demanded that the money be sent to a certain address in the United States via Western Union by May 31.

Roads near the school campus were shut down and bomb-sniffing dogs searched the area. No bombs were found.

Netanyahu had insisted on keeping the portfolio for himself, but the High Court of Justice forced him to give it up in February, due to a myriad of conflicts of interest.

Kara, who was initially a deputy minister in the Regional Cooperation Ministry under Netanyahu, s expected to loyally carry out Netanyahu’s plans for the Communications Ministry