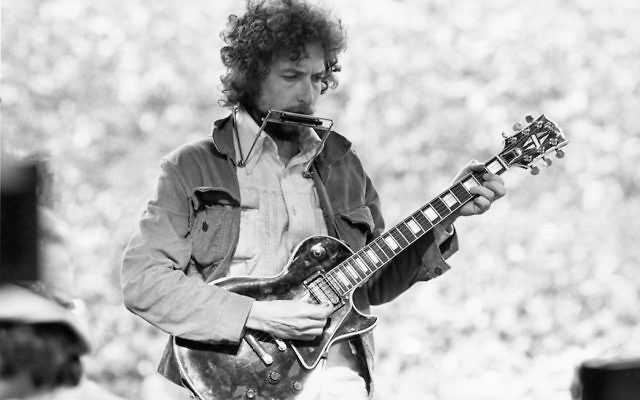 Jewish volunteers were onsite in downtown Manchester yesterday to give moral and physical support to law enforcement in the aftermath of the United Kingdom’s deadliest terror attack in 12 years, the Times of Israel reports. Twenty-two people were killed, including children, and dozens injured, the previous evening in an apparent suicide bomb attack at the end of a concert by pop star Ariana Grande at Manchester Arena.

“We’ve been out the entire night visiting the crew, helping people who were separated from their families and trying to get back home. We’ve been bringing warm blankets, and now in the morning we brought hot drinks and danishes for the police and law enforcement,” said Rabbi Shneur Cohen of Chabad of Manchester City Center, who set up a lunch stall.

Israeli president Reuven Rivlin yesterday opened the 50th annual celebrations of Jerusalem Day, which marks Israel’s reunification of the holy city in the 1967 Six Day War, the Times of Israel reports. In a ceremony at the Western Wall, he declared that the country will always “insist” that Jerusalem is its capital. “There never has been, there will never be any other reality. Here, in these stones, beats the heart of the Jewish People.”

Also speaking at the ceremony was Israeli Army Chief of Staff Gadi Eisenkot, who addressed the crowd of veterans from the brigades that fought in Jerusalem in 1967 and “returned to the Jewish people their eternal capital.” 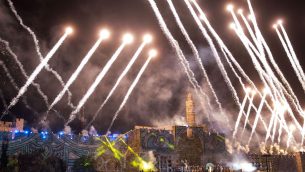 The walls of Jerusalem’s Old City are projected with video art on May 21, 2017, during the ceremony marking the 50th anniversary of Jerusalem’s reunification and the 1967 War. JTA

Although the importance of Jerusalem Day is widely touted by Israeli lawmakers, the holiday is not celebrated by a large segment of the Israeli public. The holiday is widely known for the “flag dance,” in which primarily religious teenagers march through the city decked in white and blue.

Check back here for more coverage of Jerusalem Day as it unfolds, and read our special Israel Now issue covering 50 years since the Six-Day war. Also online, read an excerpt from Yossi Klein Halevi’s bestselling book on the war, Blue Greenberg’s heartfelt diary documenting her conflicted relationship to the city, the mixed blessing of urban renewal and gentrification in the holy city, and a rare partnership that is forging between neighbors at the border between east and west Jerusalem.

The Tel Aviv Municipality illuminated the facade of its building last night in the colors of the United Kingdom’s Union Jack flag in a show of solidarity with Manchester, according to the Jerusalem Post. Tel Aviv Mayor Ron Huldai expressed his condolences to the victims of Monday night’s attack.

The Municipality building lights up tonight as our thoughts and hearts go to the people of #Manchester pic.twitter.com/PevozMaN2O

A sad morning here in @TelAviv as our hearts go out to the people of #Manchester. Tonight we will light the Municipality with Union Jack. pic.twitter.com/RcRXu3kcbk

Orthodox man beaten on way to prayers in Los Angeles

An elderly man wearing a kipa was attacked Monday as he walked to morning prayers in the Los Angeles Fairfax neighborhood, JTA reports. The attack took place near the Congregation Bais Yehuda synagogue. A graphic surveillance video shows the assailant punching and kicking the man, knocking him to the ground, then walking away from the scene. Los Angeles police have not classified the attack as a hate crime or robbery, but rather a random attack.

Mazel tov! The musician, who turns 76 today, added another award to his legendary résumé last year with the Nobel Prize in Literature. Watch the video above (by JTA) and read Jewish writers, critics weigh in on the singer’s literature prize and his Yiddishkeit.

Bruce Duthu, a Native American studies scholar, announced that he has declined his appointment as the next dean of the Dartmouth University faculty of arts and science because of a controversy over his co-authorship of a 2013 declaration in supporting of a boycott of Israeli academic institutions.

The Dartmouth campus newspaper reports that Duthu, in an email message, said he will also step down from his current position as associate dean of the faculty for international studies and interdisciplinary programs, and return to the Native American studies department as a faculty member.

Duthu said criticism of his support for the BDS movement (boycott, divestment and sanctions) “will likely continue to be a significant distraction for me professionally and a source of considerable pain and frustration for me personally.” Earlier this month, economics professor Alan Gustman sent a faculty-wide email stating that Duthu’s co-authorship of the Native American and Indigenous Studies Association’s 2013 “Declaration of Support for the Boycott of Israeli Academic Institutions” signifies that he is a BDS advocate.