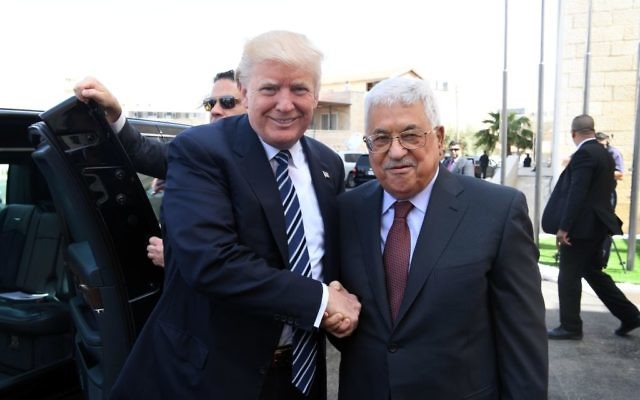 Palestinian Authority President Mahmud Abbas and US President Donald Trump greet each other at the Presidential Palace in Bethlehem on May 23, 2017. Getty Images

In Bethlehem today during his second day in Israel and the Palestinian territories, President Trump, standing alongside Palestinian Authority President Mahmoud, stressed that a precondition for peace is zero tolerance for violence, incitement and terrorism. The “not-so-subtle message” to Abbas, according to Israeli media,  was: “curb anti-Israeli incitement, condemn attacks by Palestinians against Israeli civilians and stop paying allowances to the families of Palestinian terrorists.”

“Peace can never take root in an environment where violence is tolerated, funded and even rewarded,” Trump said, in an apparent reference to the salaries paid by the PA to jailed Palestinian terrorists and to the families of Palestinian prisoners killed while committing terror attacks.

Trump also condemned the yesterday’s bombing of a pop concert in Manchester, England, which claimed the lives of 22 people, describing those who carried out the attack as “evil losers.”

Carrying signs that read “Impeach Trump” and “Trump go home,” more than 500 protesters rallied in front of the U.S. Embassy in Tel Aviv and the U.S. Consulate in Jerusalem.  The protesters, organized by Democrats Abroad in Israel, Pantsuit Nation and Green Course, were mostly American and Israeli-American Jews who have immigrated to Israel or are visiting the country. A separate anti-Trump protest held by the radical left-wing party Hadash also participated.

A Jewish organization’s appeal in Poland has led hundreds of radio listeners to provide information about mass graves and burial sites of Jews to a Catholic radio station that has been accused of promoting anti-Semitism. JTA reports that some 300 calls were received in recent days by the call center at Poland’s Radio Maryja with information about sites of mass executions of Jews, stolen tombstones and unknown hiding places of Jews during the Holocaust.

The From the Depths group had made the appeal for information last week on the station.

Will the UK see a Royal-Jewish wedding?

Rumors have been swirling in England over reports that Prince Harry is on the verge of getting engaged to Meghan Markle, and that Westminster Abbey has given its approval for such a wedding despite the actress’s “Jewish background.,” according to the Jerusalem Post. The paper reports that a spokesman for the royal family said if Harry were to propose to Markle, they would be able to have an “interfaith” ceremony at Westminster Abbey.

Markle is divorced; her mother is African-American; her father, Jewish. Shulamit “Shula” Cohen-Kishik, a a spy for Israel’s Mossad intelligence agency who worked undercover in Lebanon for 14 years, has died at 100. She was codenamed “The Pearl.”

The native who moved with her famiy to pre-state Palestine and settled  at 16 in Lebanon as a newlywed began working for the Mossad at 27,  helping to bring persecuted Jews from Arab countries to Israel and gathering intelligence information about Arab military activities — information she was able to collect by getting herself accepted into Lebanon’s high society. 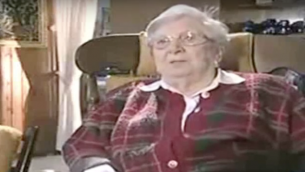 She was caught smuggling in 1952 and taken to jail just three weeks after giving birth, where she spent 36 days in confinement. Cohen-Kishik continued her clandestine activities for another nine years before things became too dangerous and she moved to Rome for three months. Upon her return to Lebanon in 1961, she was arrested immediately for espionage. While in prison during the trial she was brutally tortured.

Sentenced to death by hanging, the verdict was reduced to 20 years of hard labor because she was a mother of seven.

In 1967, Cohen-Kishik was released in a secret prisoner exchange following the Six-Day War. She then immigrated with her family to Jerusalem, where she spent the rest of her life. “I never worked for a prize or for glory,” she said. “I did what I did because I wanted to, because I loved the country and I wanted to help its establishment.”

Romania’s Parliament has passed legislation that will provide increased direct financial support for Holocaust survivors, JTA reports. The funds, a monthly payment of up to $97.98 per month for each year of deportation or detention, will be available in July to people who were persecuted in Romania between 1940 and 1945. The law also applies to Holocaust survivors who no longer have Romanian citizenship or reside in the country, as well as the spouse of a deceased Holocaust survivor if they didn’t remarry.